Ferries between Dover and Calais have been suspended due to a strike by staff at the French port.

The 24-hour closure of the Port of Calais began at 8am on Thursday.

Ferry operators DFDS and P&O Ferries normally run a total of up to 50 sailings per day between Dover and Calais. 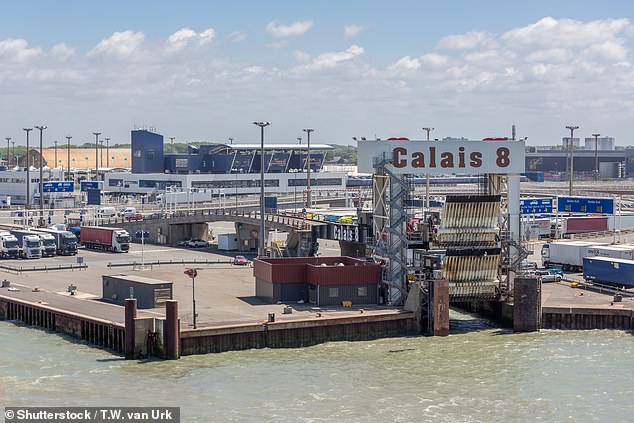 DFDS has switched one of its Calais ships to the Dover-Dunkirk route to provide extra capacity.

Freight vehicles and passengers due to travel between Dover and Calais with DFDS on Thursday are being shipped on the next available Dover-Dunkirk sailing instead.

The Port of Dover said in a statement: ‘We will continue to monitor the situation closely in liaison with our ferry partners and the Port of Calais.

‘Please note that there may be delays to services when the Port of Calais reopens and services resume to normal.’

A representative from P&O Ferries, who do not operate an alternative crossing to Dunkirk, said all their crossings to Calais had been suspended due to the industrial action.

They are advising customers that if they wish to postpone their trip, they can do so by amending their booking online.

The spokesman added that they are ‘currently transferring our tourist passengers to other operators where possible’.

It is understood Kent Police Officers are preparing to install Operation Stack – where parts of the M20 are used to queue lorries travelling towards the continent, to avoid causing gridlock across Kent’s road network.

It is only introduced as an emergency measure after consultation with other agencies and implemented following a thorough assessment of issues, including safety concerns and disruption on the road network.

Kent Highway Services said: ‘The Dover Traffic Access Protocol (TAP) scheme on the A20 at Aycliffe has been implemented due to heavy freight volumes.

‘This is to prevent Portbound traffic from disrupting the local road network and the A20 through Dover town.’

The Port of Dover is open and tourist traffic bound for Dover is advised to use the M2/A2 route.

Have you been affected by industrial action in Calais? Get in touch by emailing [email protected]