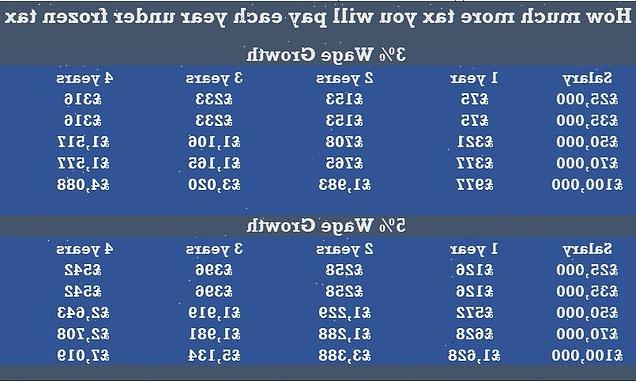 Sunak’s stealth tax raid on workers: PM and chancellor to take THOUSANDS from every average earner over the next five years to fill £50billion hole in budget

Jeremy Hunt will rake in hundreds of pounds extra from each and every average worker over the next five years without making a single change to the tax system, new analysis reveals.

The Chancellor is plotting a series of tax rises to be unveiled in his Autumn Statement on November 17.

The freeze to the income tax thresholds up to and including the 2025/2026 tax year was announced during the Budget in March 2021, by Mr Sunak when he was Chancellor.

Over the past 20 years average wage growth per year has been close to 3 per cent per year. However, with inflation now in the double digits it is likely to be higher over the next few years.

Shaun Moore, tax and financial planning expert at Quilter, which carried out the analysis, said: ‘These calculations illustrate the power of fiscal drag and how freezing income tax thresholds is a form of stealth tax.

‘Ultimately, if thresholds remain frozen for a number of years, then you will end up paying considerably more tax. Thresholds at present are meant to remain frozen until 2026 but with the cost-of-living crisis weighing heavy on government spending this could be extended.’ 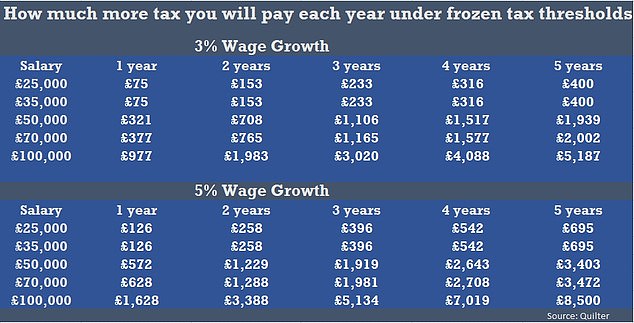 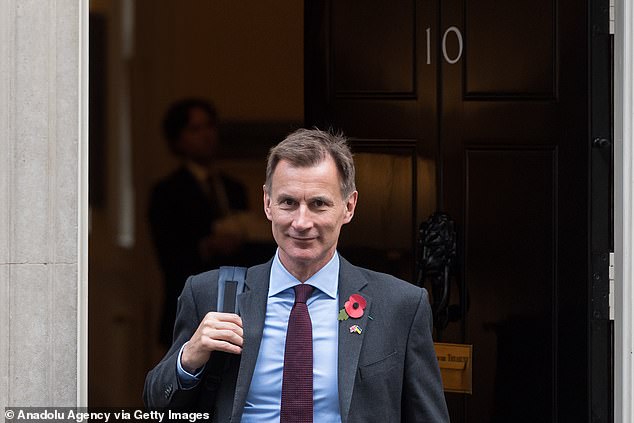 The Chancellor is set to meet colleagues this week as they try to thrash out a package ahead of the crucial Autumn Statement on November 17. 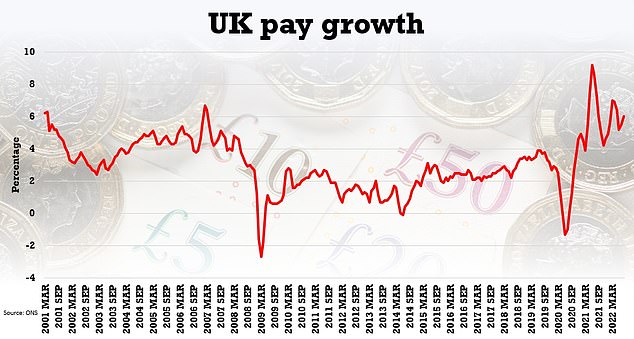 The Chancellor is set to meet colleagues this week as they try to thrash out a package ahead of the crucial Autumn Statement on November 17.

Last night Mr Hunt warned business leaders last night that there was “no way of sugar coating” the fact that personal and business taxes are going to rise.

According to Politico he told an event at Claridges hotel in London: ‘It’s going to be a difficult pill for everyone to swallow.’

Mr Sunak told Cabinet yesterday that ‘difficult decisions’ are coming, but stressed the NHS would be ‘prioritised’ for funding – while making clear that in return the health service will need to accept reform.

However, that means other departments are facing even deeper curbs, as spiking inflation erodes the value of their budgets. Defence Secretary Ben Wallace told a House of Lords committee this afternoon that he will suggest to the Chancellor that the strength of the army could stay at 76,000 rather than falling to 73,000 as planned.

He said the upcoming fiscal event will show ‘how fixed’ the new premier is on the promise to raise defence spending to 3 per cent of GDP by 2030.

He told the International Relations and Defence Committee: ‘I’m confident that the argument has been made that defence needs to come back up the priority in investment, the next argument is how much by, and obviously as Defence Secretary, I would like by significant amounts.

‘But I also live in the real world and the next two years there is a spending challenge we have to meet. I’ve got my envelope.

‘Inflation is the biggest enemy of me with a capital budget that ranges between £15 to 18 billion a year, roughly. That level of capital, unlike other departments, means that I am particularly vulnerable to inflation and exchange rate pressures.

‘So I would like to get through that and then plan into the longer term.’

The assessment came after the premier and Mr Hunt concluded that soaking the rich and taking an axe to public spending in the Autumn Statement will not be enough to balance the books.

Instead, broad-based tax rises will be needed, with speculation that thresholds will be frozen for longer to drag millions of people deeper into the system by ‘stealth’.

The government is expected to stick to manifesto pledges not to hike the headline rates of income tax, national insurance or VAT.

Meanwhile, public sector workers could face a 2 per cent cap on pay rises next year, far below the expected rate of inflation, as the government seeks to split the fiscal tightening 50-50 between trimming spending and raising revenue.