Support for Scottish independence has dramatically surged in recent weeks with almost six in 10 Scots now supporting the break up of the United Kingdom.

In a major blow to Boris Johnson’s pro-union administration in London, a new poll today outlines the battle he faces to keep Britain united in the face of Brexit and coronavirus.

The analysis by Ipsos Mori for STV found that among those who would be likely to vote in an independence referendum, 58 per cent say they would vote Yes, while 42 per cent would vote No.

At the last referendum in 2014, 55 per cent of Scots voted to stay a part of the UK, with 45 per cent backing secession.

Additionally, almost two thirds (64 per cent) of Scots believe that Mr Johnson should permit a fresh vote within the next five years if the SNP wins a majority in Holyrood elections next May. This is something he has ruled out.

Emily Gray, managing director of Ipsos Mori Scotland, said: ‘Our latest poll will put a spring in the step of nationalists but makes grim reading for unionists.

‘The Scottish public have shifted even further towards supporting an independent Scotland, with record numbers now saying they would vote Yes. 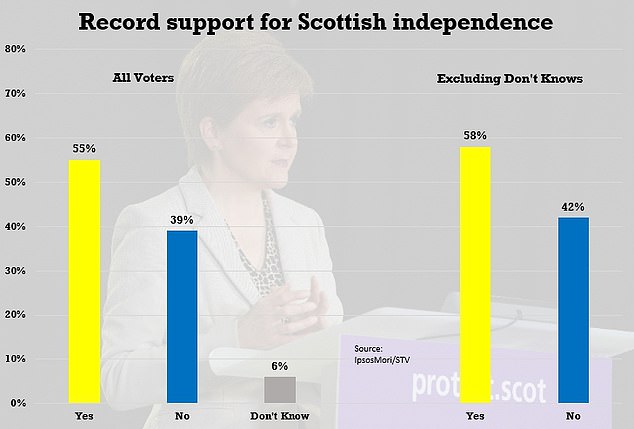 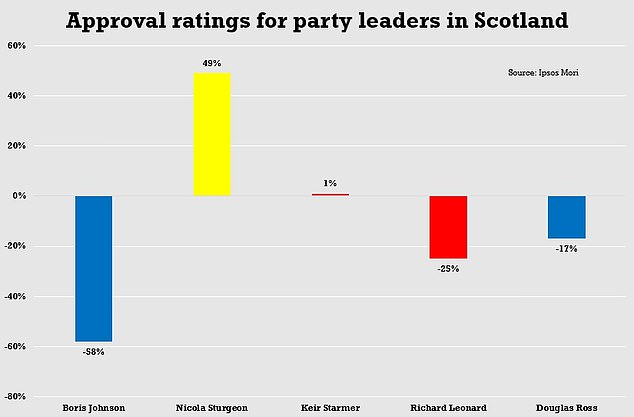 ‘Of course, we are still a long way out from next May’s Holyrood elections, but SNP support currently looks very strong, buoyed by Nicola Sturgeon’s high satisfaction ratings among Scottish voters.

Our poll suggests that there will be significant public pressure for the UK Government to transfer powers to the Scottish Parliament to hold a second independence referendum if the SNP win a majority at next year’s Holyrood elections.’

The poll showed the SNP has a commanding lead ahead of the May vote, which is expected to keep Ms Sturgeon as First Minister.

Ms Sturgeon’s personal ratings are extremely positive, with a net approval rating of 49 per cent.

This compares with negative net satisfaction ratings for the other party leaders, with new Conservative chief Douglas Ross on -17 per cent, Labour’s Richard Leonard  at -25 per cent and Liberal Democrat Willie Rennie on -1 per cent.

More than three quarters of Scots (76 per cent) are dissatisfied with the way Boris Johnson is doing his job as Prime Minister, the lowest ratings Ipsos Mori has ever recorded for him in Scotland. Just 19 per cent are satisfied with him while 5 per cent don’t know.

Labour’s Keir Starmer is the only party leader other than Nicola Sturgeon to receive a positive net satisfaction rating from the Scottish public, at 16 per cent.

SNP MSP Keith Brown said: ‘This is a landmark poll which shows that independence has now become the settled will of the majority of people in Scotland.

‘Faced with the chaotic and incompetent government of Boris Johnson and a Westminster system which treats Scotland as an afterthought at best, more and more people are deciding that the best way forward for Scotland is as an equal, independent country.

‘And if there is a clear majority for pro-independence, pro-referendum parties in next year’s election – as this poll shows there would be by some considerable margin – then no Tory or any UK Government has the right to stand in the way.’