Chief Health Officer Brett Sutton says there is clear evidence to prove food prepared by I Cook Foods caused an elderly patient to die while suffering from listeria.

Appearing at parliamentary inquiry into the forced closure of the Dandenong business, Professor Sutton said genetic testing showed the listeria samples found in the woman were a “very close match” to samples found at the food company’s premises.

The patient’s samples were a closer match to those from the company than any other listeria samples taken in Australia for years, he said.

The then acting chief health officer signed off on an order to close the business in early 2019 because officials determined it had provided food to an 86-year-old Knox private hospital patient who died from a listeria infection.

All charges against the company were later dropped and a former Dandenong Council official claimed she witnessed a health inspector editing a picture to remove traces of a tissue that carried the slug that was allegedly planted inside I Cook Food’s premises.

The inquiry into the closure was relaunched after new emails were unearthed in recent weeks. The documents show a Knox City Council official found the 86-year-old woman was on a diet of soft foods not provided by I Cook Foods.

However, Professor Sutton said his decision to close the business in early 2019 would not have changed had he been aware of the emails, which were only shown to him in recent weeks.

He said it may have been true that the woman was on a soft diet later in her illness, but the department’s own investigations showed she was eating a standard diet, which included I Cook Foods sandwiches at some point in her hospital stay.

“There’s no other reasonable explanation that the source … was anything other than I Cook Foods,” Professor Sutton said.

The patient’s daughters also gave evidence to the inquiry, on what would have been their mother’s birthday. 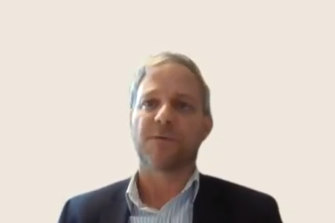 Screengrab of Chief Health Officer Professor Brett Sutton speaking at the inquiry into the closure of I Cook Foods Pty Ltd.

One daughter confirmed that her mother was eating sandwiches during her stay, denting the theory that she ate nothing other than soft foods. She confirmed her mother began eating a soft diet later in her stay as her condition deteriorated.

Professor Sutton apologised for erroneous evidence he gave at a previous parliamentary inquiry when he said I Cook Foods was the only supplier of food to the hospital.

He said he had been of the belief the Dandenong caterer was the sole provider of meals to Knox Private Hospital, but subsequent evidence has shown there were several.

Some of the other companies were also found to be non-compliant with food safety standards, but no listeria was detected.

Professor Sutton said the information he had relied on about I Cook Foods being the sole supplier was incorrect.

“I do apologise for any confusion caused,” he said.