Taipei: Taiwan says the US Navy is free to sail through its strait after an American warship did so soon after Beijing warned against foreign interference in its relationship with the island.

Taiwan's Defence Ministry said the warship sailed northward through the Taiwan Strait. It said joint a intelligence, surveillance and reconnaissance taskforce was monitoring surrounding waters from start to finish and nothing "unusual" took place. 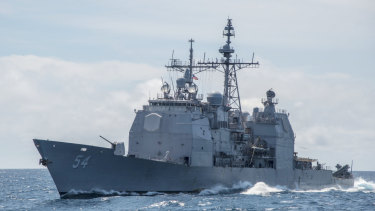 Taiwan says the US Navy is free to sail through its strait after an American warship defied Beijing’s warnings and did so.Credit:US Navy/AP

Commander Clay Doss, a spokesman for the US Navy's Seventh Fleet, said the "USS Antietam conducted a routine Taiwan Strait transit" on Wednesday to Thursday "in accordance with international law."

The transit "demonstrates the US commitment to a free and open Indo-Pacific," Doss said. "The US Navy will continue to fly, sail and operate anywhere international law allows."

China on Wednesday warned that it could use force against anyone who intervenes in its efforts to reunify Taiwan, a democratically-governed island which China considers its territory.

The democratically governed island split from the mainland amid civil war in 1949.

25/07/2019 World News Comments Off on Taiwan strait: US warship sails through amid China tensions
Lifestyle