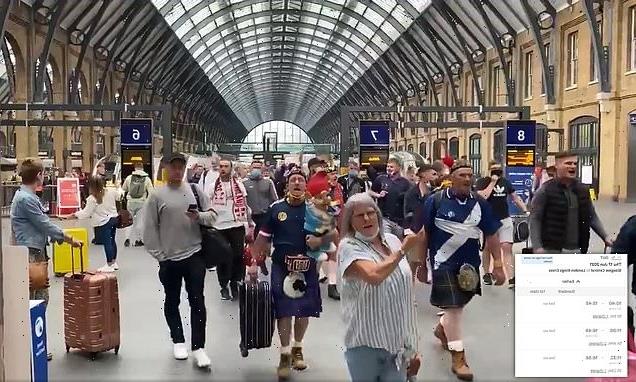 Tartan Army invades London: Fans in Kilts and waving Saltires pour off sold out trains ahead of Scotland’s Euro 2020 clash against England as police and ambulance chiefs brace for arrival of 20,000 ticketless supporters

Scotland fans are already flooding into London ahead of the nation’s Euro 2020 clash against England in Wembley tomorrow night – with the Tartan Army selling out trains from Glasgow and Edinburgh.

As many as 6,000 Scots are expected to descend on London by Friday, according to the Scottish Football Supporters Association – while other estimates put the figure at 20,000.

This is despite only 3,000 tickets sold for tomorrow’s match at Wembley against England, the Auld Enemy, which doesn’t kick off until 8pm.

All 15 of the train services going straight to London from Glasgow in time for the match on Friday were sold out by Monday this week. And nearly all of the 17 trains from Edinburgh were also fully booked for standard tickets.

All bar one train arriving from Glasgow on Thursday was sold out today, meaning the influx of fans has begun more than 24 hours before kick off. 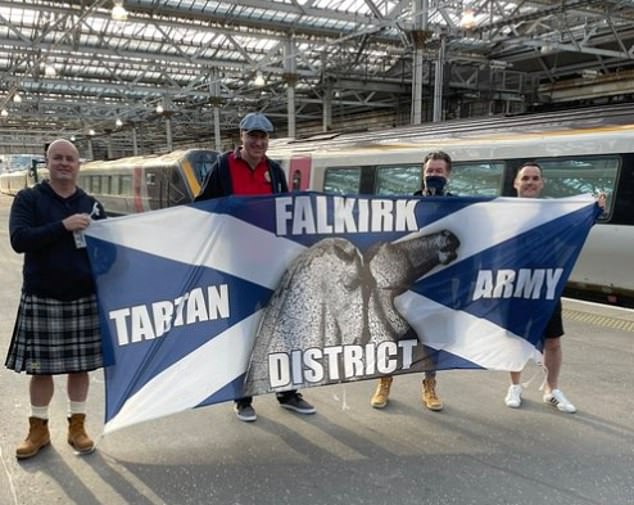 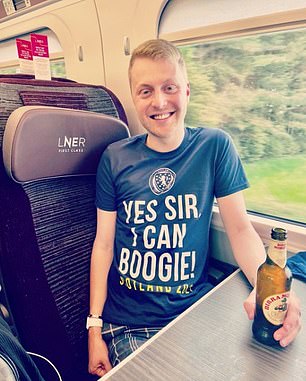 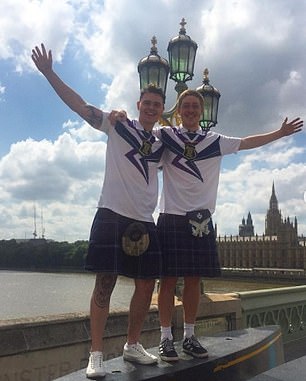 As many as 6,000 Scots are expected to descend on the capital by Friday, according to the Scottish Football Supporters Association – while other estimates put the figure at 20,000. Left: A Scotland fan arriving by train. Right: Two visiting supporters posing in front of the Houses of Parliament

Several chanted ‘we’ll be coming down the road’, a Scotland Football Team song.

Tomorrow marks the first clash between the two teams in four years.

It is thought that Scotland will join England in taking a knee to protest racial inequality during Friday’s game.

Following tomorrow’s match, Scotland will return to Hampden Park in Glasgow for the final group game against Croatia on 22 June.

About 12,000 people descended on Hampden to watch their match against the Czech Republic on Monday.

This week, ticketless Scotland supporters were urged to stay away from Wembley amid an influx of fans.

Sadiq Khan this week performed a u-turn on Scottish fans travelling up to London.

After previously welcoming fans as a much-needed boost to the capital’s hard-hit hospitality industry, the London mayor said they pose a ‘serious risk’ to spreading Covid. 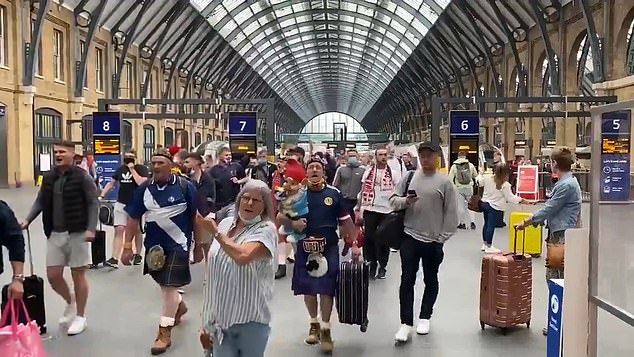 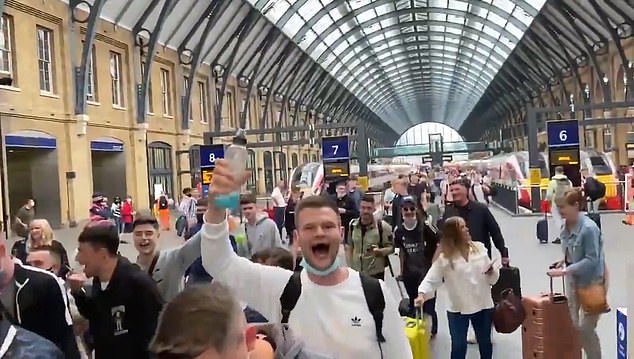 Several chanted ‘we’ll be coming down the road’, a Scotland Football Team song

He urged those without a ticket to avoid travel and ‘enjoy the game from Scotland’.

His warning came amid concerns that those without tickets could meet in Hyde Park for a mass party after the match – with London Ambulance bosses putting the potential meet up ‘on their radar’.

London Ambulance Service urged visitors to be sensible with their drinking and said it has  ‘no plans’ to have an increased amount of medics on standby, The Evening Standard reports. 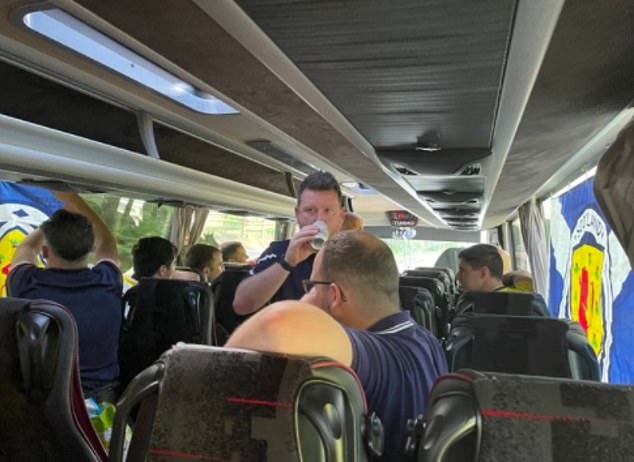 Sadiq Khan this week performed a u-turn on Scottish fans travelling up to London. Pictured: Fans heading to London on a coach

Mr Khan said: ‘Scottish fans are renowned around the world for bringing a party atmosphere with them to the big tournaments but with COVID restrictions still in place on both sides of the border, the best thing for fans without tickets to the game or a safe place to watch it is to enjoy the game from Scotland and not come to London.

‘In an ideal world I would welcome the Tartan Army to London for this match with open arms – but with Covid cases increasing, and with so much at stake as we fight this awful virus, I’m afraid that it just cannot be this time, so the best thing to do is not to come to London and instead enjoy the game at home.’

Hundreds of Met Police officers will form a ring of steel at Wembley to prevent ticketless fans accessing the stadium.

There will also be a significant police presence in tourist areas of such as Trafalgar Square, as well as at Kings Cross and Euston stations.

Scotland have a ticket allocation of 2,800 in the reduced capacity crowd of 22,500, but thousands are expected to travel to London regardless.

There are also concerns about Scotland fans infiltrating the home areas of the stadium as tickets are still changing hands on various resale websites.

The police will work with stewards to stop ticketless fans accessing Wembley Way, and travelling fans in the England sections risk being ejected from the stadium.

Scottish Football Supporters Association founder, Paul Goodwin, questioned why there was no fan zone provided for supporters without tickets in London, adding that Glasgow has one that can take 6,000 seated and socially distanced people. 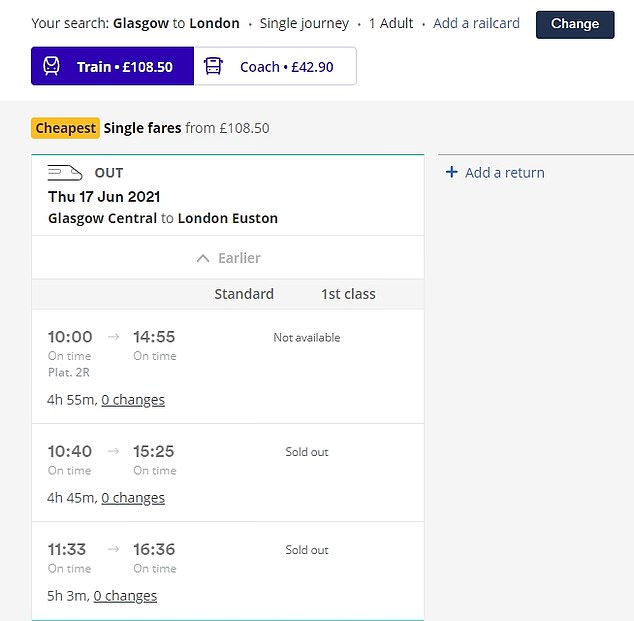 All 15 of the train services going straight to London from Glasgow in time for the match on Friday were sold out by Monday this week. Pictured: Trainline search results for today 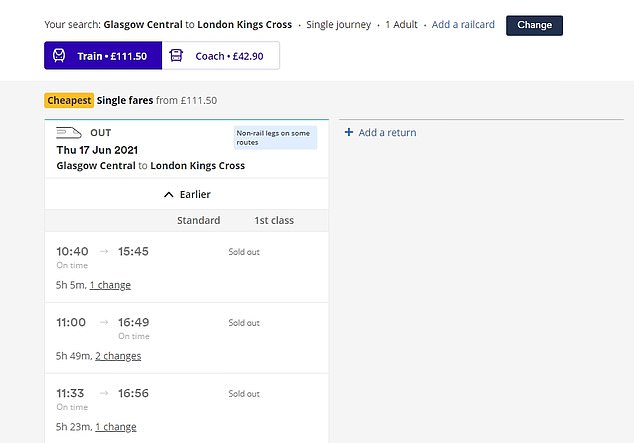 All bar one train arriving on Thursday was sold out (pictured), meaning the influx of fans has begun more than 24 hours before kick off 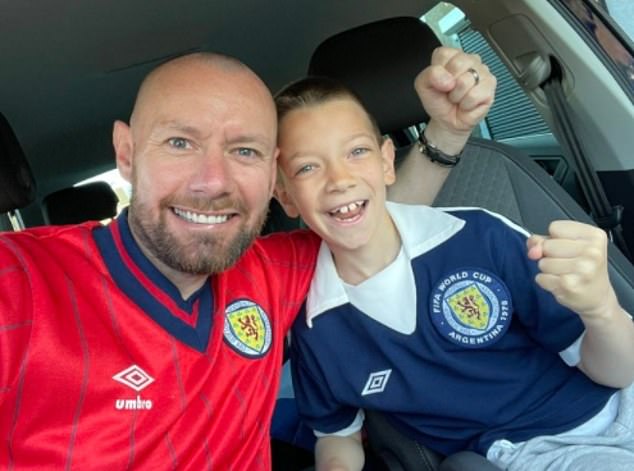 Following tomorrow’s match, Scotland will return to Hampden Park in Glasgow for the final group game against Croatia on 22 June. Pictured: Other fans opted to drive to London

He told The Times: ‘There will be plenty of tartan on display as we like coming down and showing off. The fact we have not been part of it [a major tournament] for such a long time is a factor.’

Sven Lister, part of the Roysth Tartan Army supporters club, said that not facilitating a way for fans to watch the match could bring about trouble.

‘I reckon there will be about 20,000 or so turning out. It just worries me that they’ve not done anything. There’s going to be groups wandering, possibly not getting to see the football, which would cause trouble,’ he told MyLondon.

But Goodwin said that Scottish fans have won awards for their friendliness and good behaviour at the previous two tournaments.

The news comes following disappointment for Scotland fans after their country lost 2-0 in their first match in a major tournament in 23 years, which saw a Czech Republic player score an extraordinary goal from the halfway line.

The game was played at Hampden Park in Glasgow in front of a socially-distanced crowd of 12,000 fans.

The Met’s Deputy Assistant Comissioner, Jane Connors, told Sportsmail the force were preparing to deal with an invasion of ticketless fans for Scotland’s first game at Wembley since a World Cup qualifier five years ago in what will be only their second tournament meeting in 114 fixtures.

‘We anticipate a significant number of fans are expecting to travel to London,’ Connors said.

‘I would urge people: please, only come to London if you have a ticket for a match, or fanzone. There are no alternative sites for fans to gather in large numbers and there are limited spaces in pubs and bars and you could end up missing the game. London is still in lockdown and must observe current Government guidelines.’

Mr Goodwin added that said Steve Clarke side’s defeat by the Czech Republic may have deterred fans from travelling and complained about the lack of a fanzone for the visitors in London.

‘There’s less likely to be a mass invasion as people are feeling deflated after the Czech result, but there will be a few thousand without tickets, that’s for sure,’ Goodwin said.

‘In addition to those travelling, as someone who lived in London for 16 years I know how big the Scottish community is down there.

‘The official allocation is 3,000 so it could be double that or even more. A Scottish fanzone would have helped keep people away from Wembley. Maybe that decision was taken to stop people from travelling.’