Singapore: Singapore’s minister for law and home affairs has defended a series of hangings that have drawn international outcry this year, rejecting suggestions that the city-state’s reputation has been damaged by its resumption of executions.

The south-east Asian financial hub is known for its hardline stance on drugs, which it credits for its standing as one of the safest places in the world. 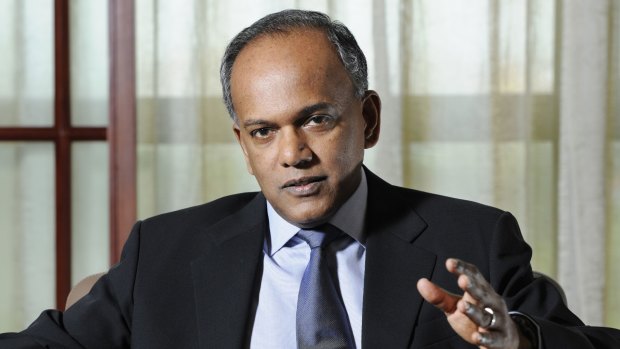 But after not carrying out a death sentence since 2019, a spate of 10 executions of drug trafficking offenders within four months has put Singapore’s deployment of capital punishment back into the spotlight this year.

Most notably was the hanging at Changi prison in April of Malaysian man Nagaenthran Dharmalingam, who had brought 42 grams of heroin across the border in 2009 but whose lawyers argued should be spared under international convention because of an intellectual impairment.

The frequency of the executions between March and August alarmed United Nations human rights experts and organisations such as the European Union, which have called on Singapore to abolish death sentences for drugs crimes.

In an interview with The Sydney Morning Herald and The Age, however, Singapore Law and Home Affairs Minister K. Shanmugam issued a staunch defence of the country’s execution of drug traffickers. 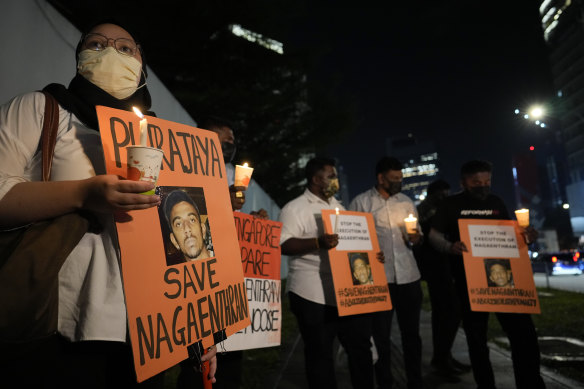 Malaysian activists campaign in April to spare Nagaenthran Dharmalingam from the death penalty.Credit:AP

“Survey after survey shows that more than 80 per cent of Singaporeans support the death penalty. So, domestically, there is overwhelming support,” he said.

“Internationally, there are some statements issued by UN special rapporteurs. The European Union has an ideological focus on the death penalty. But I would like to ask them if they have a better solution. The chief of the largest police union in [the] Netherlands says that [the] Netherlands is effectively a narco state. What about the people who die of drugs? The gang violence in Sweden is such that it’s become a major election issue. Nobody talks about this. So, when the European Union is able to tell us there is a better solution, we will listen.”

The reaffirming of Singapore’s stance comes as nearby Malaysia shifts towards removing mandatory death sentences for drug trafficking and 22 other offences and as Thailand liberalises the consumption of cannabis.

Thailand’s decision to become the first country in Asia to decriminalise marijuana has not come without significant complications, with politicians expressing mounting concern about it being used recreationally rather than for medical reasons, as the government in Bangkok intended. 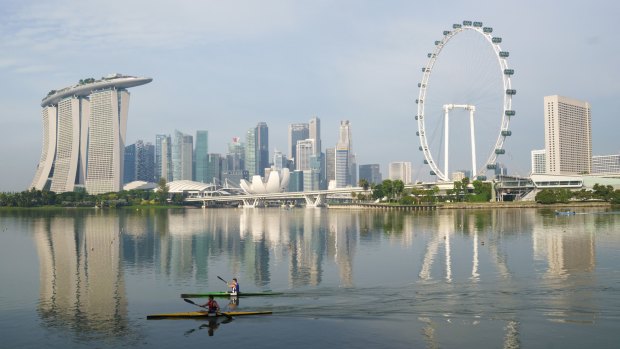 Singapore says its tough stance on drugs has made it one of the safest cities in the world.Credit:Bloomberg

It is certainly a path Singapore won’t be following. Instead, it is doubling down on an approach it says is keeping its streets secure, and for which it makes no apologies.

“Singapore is clean, crime-free effectively, safe. And the only way it can remain that way is that we are tough on traffickers.”

Anti-death penalty advocates stress there is no evidence that the death penalty acts as a deterrent against drug trafficking and that the punishment ensnares only vulnerable low-level mules, not the kingpins who send them.

The most high profile of the campaigners, Virgin Group founder Richard Branson, even warned this year that Singapore’s use of the death penalty may instead be a “deterrent to those seeking to invest and trade in the future”.

Shanmugam, however, disputes that Singapore’s appeal as a global financial hub has been dented at all.

He also takes aim at questions about deterrence, quoting a survey by Singapore in neighbouring countries in which, he said, about 80 per cent of respondents replied that the threat of capital punishment made them not want to commit serious crimes in the island nation.

Shanmugam said Singapore had no power to catch drug lords, who capitalised on the flood of illicit substances pouring out of the Golden Triangle region on the borders of Thailand, Laos and Myanmar but were unlikely to dare venturing to the city-state themselves.

“So what are we supposed to do about that? Now, if I say I don’t catch traffickers and wait for the kingpins, basically my drug policy will be out of the window,” he said.

“Are we only catching the small guys and not the big guys? It’s a non-question because, you know, the big guys don’t come into Singapore for good reasons. Imagine if they were in Singapore, Singapore would be a very different place. That’s why they don’t come in.”

On Nagaenthran, whose ultimately unsuccessful last-minute appeal this year garnered international headlines, Shanmugam has pointed to the decision of judges in Singapore, who determined that he did not have an intellectual disability despite an IQ of 69.

“I would accept that his IQ was lower than the average person. But in law, that is not the main point,” he said.

“Has anyone raised an eyebrow when the US executed at the same time last year in October, two others with the same IQ? And the US courts dismissed the same arguments. Because the fact that you have a low IQ by itself is not the main point in law. The question is, did you know what you’re doing? And he knew what he was doing. In fact, he was creating excuses and finding new ways of trying to explain away his conduct.”

Beyond culpability for the crime, lawyers for Nagaenthran also claimed his mental capacity had declined in his 12 years on death row and that he should not be hanged under the UN Convention of Rights of Persons with Disabilities, which forbids execution of the intellectually disabled.

Two psychologists, from Australia and Britain, made submissions to his last-ditch bid to have his sentence commuted to life in prison, describing deterioration in his neurocognitive function that was “clear and significant”.

But Shanmugam said they were irrelevant because neither had seen the prisoner but had only reviewed the reports of other experts.

“I think our prime minister with your different prime ministers have had a very good relationship [and] see eye to eye. And so, the economic relationship, the political relationship, is good. With the other countries in South-East Asia I would say Australia has been leaning forward. It’s a question of whether different countries have had their own priorities. Some have leaned forward, some haven’t. So, I think that’s where I see some gaps. And I think this [Australian] government is keen to close those gaps, and rightly so.”

Tension between the US and China and staying neutral

“We are very concerned about it. We are all subject to the vagaries of the tensions. So obviously, we want the tensions to cool down, and if we take sides, that is highly disruptive, either for our security or our economy or many other aspects. Maybe at some point we will be forced to make a choice, but Singapore’s position is we will not make a choice.”

“I think the pandemic has burnished our reputation because of the way the healthcare was handled. Our fatality rate is 300 [deaths] per million. [Singapore’s] position has never been stronger. We stand out as a place to go to if you want to do business in this region.”

18/09/2022 World News Comments Off on ‘Tell us a better solution, we will listen’: Singapore defends spate of executions
Lifestyle