As damaging winds swept through Victoria on Tuesday evening, Dandenong Ranges residents hunkered down, bracing to hear the crack and thunk of falling trees – sounds all too familiar to the weather-battered community.

The weather wasn’t anywhere near as bad as the storms of June 9, which damaged homes and left a trail of debris and branches on streets. However, for many in the community, including PhD student Belinda Young, Tuesday evening was still terrifying.

“We are all very traumatised by the wind. It was terrifying last night again, even though you could tell the wind wasn’t as bad [as the June 9 storms],” Ms Young said.

“It was still terrifying to hear these trees falling right in front of you and not knowing whether you’d make it through the night. Everyone’s nerves are completely frayed.”

Kalomara resident Jenny Lutz said she saw parents posting on Facebook on Tuesday evening that they were putting earphones on their children so they didn’t hear the wind.

Ms Young, who runs the Mums of the Hills Facebook group, said three trees had fallen overnight where she lives in Sassafras, taking out power lines. The Bureau of Meteorology recorded top wind gusts of 67km/h at Coldstream about 8.30pm on Tuesday evening, but winds were much more intense elsewhere in the state. 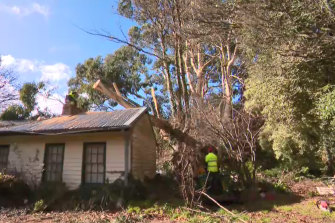 Winds reached 119km/h at Mount Buller about 10.20pm on Tuesday and topped 120km/h at Mount Hotham about 1.10am on Wednesday.

Strong winds persisted throughout Wednesday, with top guts of about 100km/h on the south coast, and winds of 93km/h recorded at St Kilda about 9.45am.

Between about 10am and 4pm on Wednesday, the SES had received 170 requests for assistance. Of the calls, 127 were for trees down, and 27 were for building damage.

Electricity distributor AusNet Services said a number of power outages on Wednesday afternoon were affecting hundreds of people in the area. The new outages come after some residents of the Dandenongs had to deal with 20 days without power after the June storms.

Students at The Patch Primary School weren’t letting the latest blackout dampen their first day back in the classroom since the lockdown lifted, with assistant principal Michelle Rayner saying they weren’t missing the computer screens they’d relied on so heavily for remote learning.

“They’re saying we won’t have power back on until midnight because we still have lines down on the road, but the kids have been extraordinary, they’re robust now due to all the disappointments they’ve had in the past year,” Ms Rayner said.

“We’ve had pretty horrendous weather for most of the day, hail and strong winds, which has been a bit triggering for some of the kids who lost homes back on June 9, it’s brought back a few scary memories, but they’ve picked up brooms and rakes and just helped out.”

But Ms Young was frustrated by the local outage, and also by the fact many in the Dandenongs had now been without NBN for seven weeks. They’d been left with nowhere to work during the state’s lockdown unless they could afford prepaid portal modems. 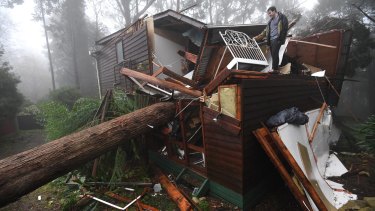 James Pickford was very lucky to escape after a large tree smashed through his Olinda bedroom in the June storms.Credit:Joe Armao

“It’s been pretty impossible and very stressful for everyone. It’s quite frustrating that we seem to have been forgotten,” she said.

“We just get that horrible statement saying ‘we’re doing the best we can’. I’m not sure they are, if I’m honest. If you transplanted this situation and put it into the centre of Melbourne, do you really think central Melbourne would accept seven weeks without internet?”

Ms Lutz, the Kalomara resident, normally lives with her 16-year-old son. During the lockdown, he had to live elsewhere because he couldn’t learn from home without the NBN.

She said she noticed the internet had finally come back on Tuesday evening, but by Wednesday morning, it was gone again. She said NBN’s response to the issue had been shocking.

“[I was] fairly uncomfortable and nervous last night … being on my own,” Ms Lutz said.

“[Not having the internet] just creates a more complex and complicated environment at home between family members.

“Obviously, I’d like my son to be home with me, and he can’t be, and then you’ve got lockdown as well, so he can’t come backwards and forwards.”

NBN Co has restored about 170,000 services that were lost because of the June 9 storms. It had about 700 premises left to reconnect, but Tuesday night’s strong winds forced it to halt that work. 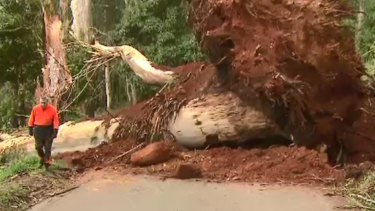 The SES received 170 requests for assistance over a six-hour period on Saturday.Credit:Nine

“We will resume work as soon as it’s safe to do so, and work to restore impacted services safely and as quickly as possible,” an NBN Co spokesman said.

“We appreciate the extended loss of connectivity due to the June storms has been difficult for impacted residents and businesses, and we thank them for their patience and understanding.”

The NBN spokesman said it was assessing the further impact to its network following the damaging overnight winds, and it has so far restored almost 1000 lost services. There were another 650 premises still without service.

Forecasters said weather conditions were set to ease by Wednesday evening and only moderate winds were expected across most of the state on Thursday.