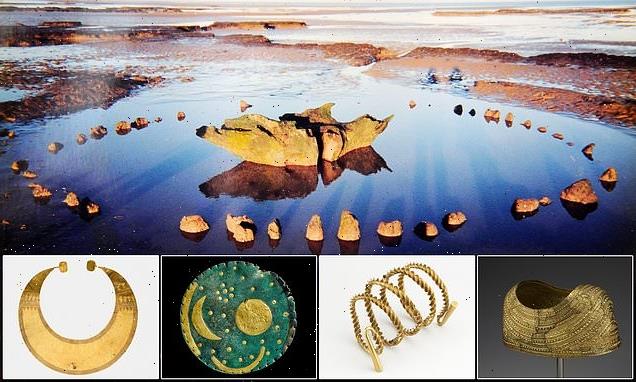 The cosmic mystery of Seahenge: For 4,000 years it lay hidden beneath the Norfolk sands. Now, as it goes on show, a battle is raging over the true purpose of the awesome monument

From the outside — to the Bronze Age eye, at least — it must have had the awe-inspiring proportions of a cathedral.

Set in a remote, windswept salt marsh next to the sea, 54 wooden posts 10ft high stood lashed into a circle, so tightly bound together it was almost impossible to see through the cracks.

At the circle’s centre was an upturned tree, its roots reaching toward the heavens like branches.

All was silence and darkness —until midsummer dawned. Then, a small wooden door positioned to meet the sunrise at the solstice was flung open — and the space filled with dazzling light.

‘It must have been a cosmic experience,’ says Dr Jennifer Wexler, a specialist in prehistoric and ancient archaeology.

‘If you were inside the circle, it would be almost as if you were entering another realm.’

Now the mysterious structure, known as Seahenge, will go on display for the first time as part of the British Museum’s blockbuster exhibition, The World of Stonehenge, which opens in February. Like the mythical lost city of Atlantis, Seahenge lay silently waiting to be discovered for thousands of years.

Wendy George’s photo of Seahenge which was discovered on Holme Beach at the time of excavation and will go on display for the first time as part of the British Museum’s blockbuster exhibition, The World of Stonehenge, which opens in February

But while Atlantis fired the imagination of dreamers and scholars, no one guessed at the existence of the curious timber circle — until a massive storm blew away the dunes on a remote Norfolk beach in 1998.

Imagine the astonishment of archaeologists called to Holme-next-the Sea, who arrived to find this huge, Bronze Age structure, more than 4,000 years old, intact.

Such circles had been the subject of speculation for years. But unlike Stonehenge, which was still standing after 5,000 years, timber circles had all but vanished.

Archaeologists had found post holes in the ground and the occasional sliver of wood, but here was the real thing.

‘It is a mysterious site,’ says Dr Wexler. ‘Seahenge was mystical and intriguing, perhaps a place of worship, perhaps a way for the people who built it to connect to the cosmos. But the really extraordinary thing is that it survived.’

Like Stonehenge, Seahenge is helping to shape our understanding of Neolithic and Bronze Age culture. The circle’s exact use and purpose remain a mystery, but some tantalising clues and theories have emerged.

Some think it may have been used for rituals associated with death, most probably the practice of ‘excarnation’, in which a body would be placed on the upturned tree, allowing the flesh to rot (or be eaten) from the bones, thus freeing the person’s spirit. 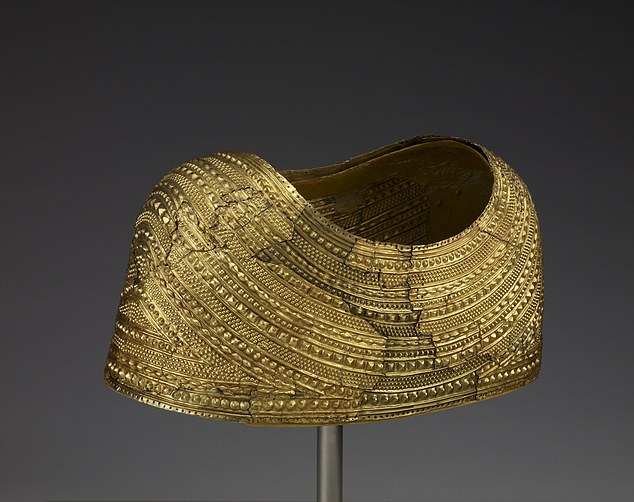 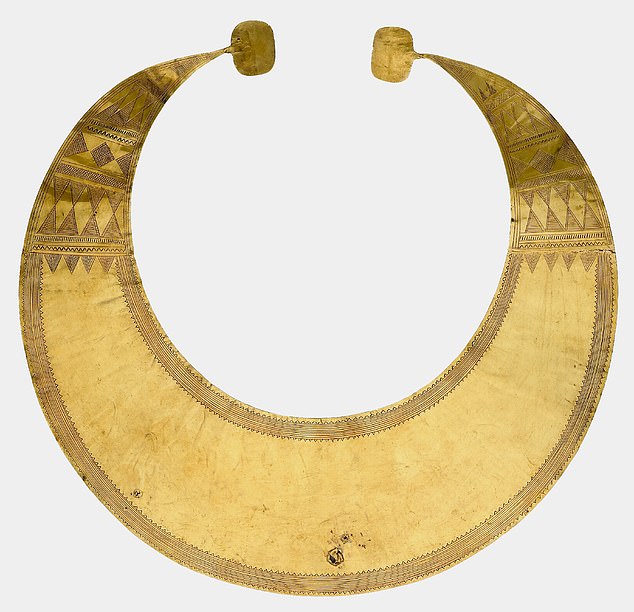 Lunula, a crescent moon shaped pendant worn in ancient Rome, believed to be from between 2400 to 2000 BC

‘It may also have been a place to connect with ancestors,’ says Dr Wexler. ‘We know the people who built Seahenge were farmers, closely connected to the seasons and beliefs about regeneration.’

In the 20 or so years since Seahenge was discovered, archaeological techniques have become refined enough to give us some astonishing details.

Thanks to carbon-dating and tree rings found in the remaining stumps, we know Seahenge was built in the spring or summer of 2049 BC.

The upturned oak at its centre was probably a tree that had blown down in a storm and was dragged to the salt marsh using a rope of woven honeysuckle.

After its discovery, Seahenge was excavated and experts who had helped save Henry VIII’s warship, the Mary Rose, advised on timber preservation.

Part of the circle went on display in nearby King’s Lynn, but for space reasons, the whole structure could not be exhibited.

But now, for the British Museum’s new exhibition, the circle will be reconstructed in its entirety and shown alongside other wonders of the Bronze Age.

These include elaborate, cone-shaped hats made from solid gold: one from Germany, one from France, both decorated with elaborate solar motifs that demonstrate the religious importance of the sun to prehistoric people.

In addition, the famous ‘gold lozenge’ found at the burial site of the Bush Barrow chieftain, close to Stonehenge, will also be shown.

This circular barrow, discovered in 1808, was filled with items of such importance its occupant is believed to have been a person of significance, probably a priest, warrior or chief.

The lozenge, made from gold and with inscribed intricate patterns — suggesting the person who made it had a knowledge of geometry — is believed to be the finest example of Bronze Age gold craftsmanship found in Britain.

Markings in Seahenge’s oak posts show that 51 bronze axes were used in its construction, suggesting a large community came together to create it.

They would have lived in humble wattle and daub huts, cooked on open fires and worn woollen tunics. 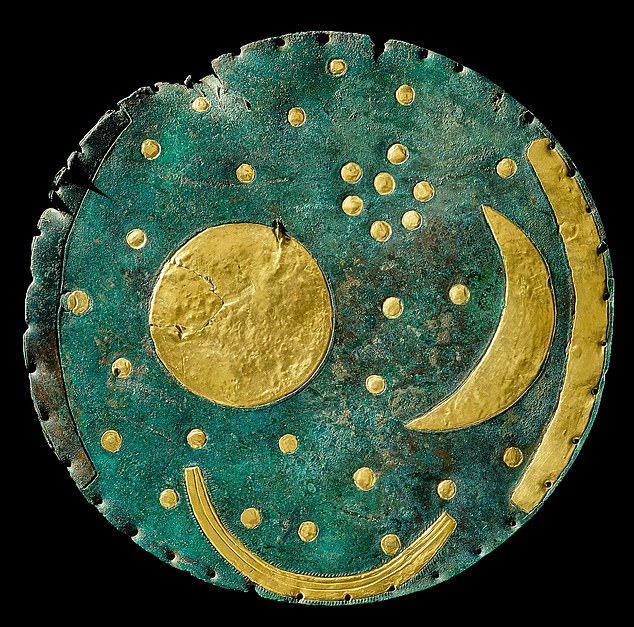 The Nebra Sky Disc, Germany, from around 1600 BC will be on display as part of the UK’s first ever story of Stonehenge 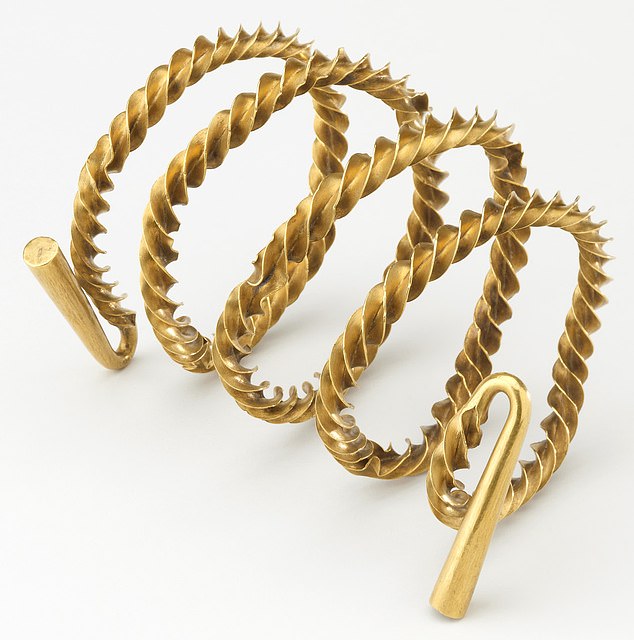 A gold flange twisted spiral torc estimated to be from between 1400BC-1100BC in Dover.

‘Occasionally as an archaeologist you find a finger mark on a [clay] pot and think, “Wow, this is the person who made this pot”,’ says Dr Wexler.

‘You get a sense of that person. Once you can imagine the person who made them, the circle is not just a static monument, it’s dynamic and real.’

Earlier this year, in her book Stonehenge — Temple Cipher Roof, architect Sarah Ewbank outlined a theory that Stonehenge had once been a building, with the stone monoliths acting as supports for a circular, pitched roof.

She believes Seahenge might well have had a similar roof structure.

‘If you think of Bronze Age people being rather like us, it makes perfect sense,’ she says.

‘For three–quarters of the year, Britain is a pretty miserable place. If it’s pouring with rain, would you want your ceremonies outside?’

She believes Bronze Age people would have been capable of creating complex structures: ‘These are people who noticed that if you got certain rocks very hot, metal came out,’ she says.

‘We like to think that because we’ve got mobile phones and things we’re much cleverer than people in the past. But we’ve built on what past people have learnt, so the person who alloyed metal to make bronze were equivalent in intelligence, I would say, to software engineers nowadays.

‘The engineering that went into building the pyramids [which were constructed around the same time as the timber circle] is as good as anything we can do today, bearing in mind we have machines.’

Dr Wexler is sceptical about the roof theory, but says: ‘The great thing about Stonehenge is there are so many theories about it we need to keep exploring.’

For the new exhibition she has chosen a piece of writing by Geoffrey of Monmouth, a cleric credited with popularising the legend of King Arthur, with an illustration showing Merlin lifting into place one of the stones that created Stonehenge. Monmouth was writing in the 12th century.

‘So even 1,000 years ago they were trying to figure out what was going on at Stonehenge,’ she says. ‘They saw it as a mythological, folkloric place. This monument continues to inspire imagination.’

The same goes for Seahenge: the wonder that was hidden for so long but has returned to intrigue and inspire us again.

n The World of Stonehenge runs from February 17 to July 17 at the British Museum.