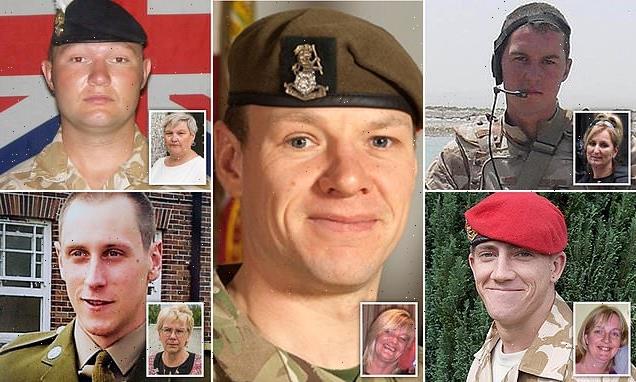 As bereaved mothers, we are heartbroken by Tony Blair’s knighthood. We beg Your Majesty to revoke it: Read the gut-wrenching cry over former Prime Minister’s honour… from five parents who lost their sons in Afghanistan 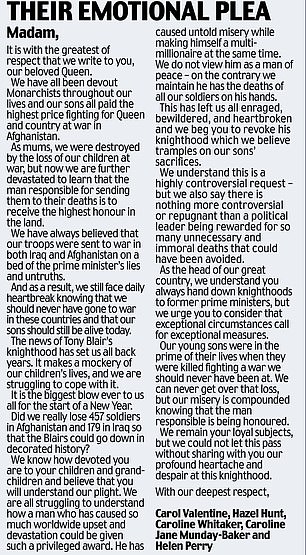 Five mothers who lost their soldier sons during the war in Afghanistan have written to the Queen urging her to strip Tony Blair of his knighthood.

The ‘heartbroken’ mothers claim the former prime minister caused ‘untold misery’ when he sent British troops to fight in Helmand Province and Iraq ‘on a bed of lies’.

In a desperate letter to their ‘beloved’ monarch, Carol Valentine, Hazel Hunt, Caroline Whitaker, Caroline Jane Munday-Baker and Helen Perry, pleaded with her to overturn the decision to give the 68-year-old the top gong.

‘We beg you to revoke his knighthood which we believe tramples on our sons’ sacrifices,’ they said.

The mothers – whose sons were aged between 21 and 29 when they died – say Sir Tony has soldiers’ deaths on his hands and should face a war crimes trial instead of receiving an honour. 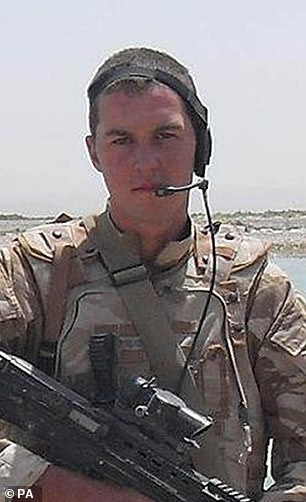 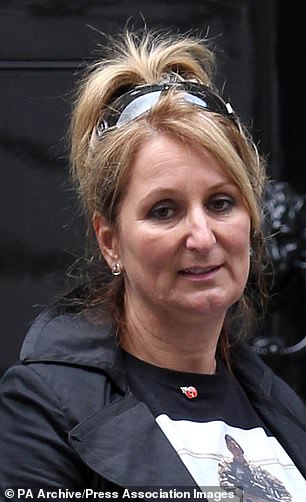 Hit explosive as he was driving: Trooper James Munday, 21, (left) son of Caroline Jane Munday-Baker (right), served alongside Princes William and Harry in D Squadron of The Household Cavalry. Both royals said they were ‘deeply saddened’ to hear news of the ‘exceptional’ soldier’s death in October 2008. Known as ‘Magpie’, the rugby fan died at the scene when the Jackal armoured vehicle he was driving hit an explosive device while on routine patrol in Helmand Province. In tributes, senior officers described Munday, from Birmingham, as ‘among the best of his generation’.

Some of them even threatened to send back the Elizabeth Crosses bestowed onto them by the Queen in national recognition of the sacrifice borne by their families.

In the open letter, the women say: ‘As mums, we were destroyed by the loss of our children at war, but now we are further devastated to learn that the man responsible for sending them to their deaths is to receive the highest honour in the land.

‘It makes a mockery of our children’s lives, and we are struggling to cope.’

The mothers say they believe the Queen – herself a ‘devoted’ mother and grandmother – ‘will understand our plight’.

They continue: ‘We are all struggling to understand how a man who has caused so much worldwide upset and devastation could be given such a privileged award. 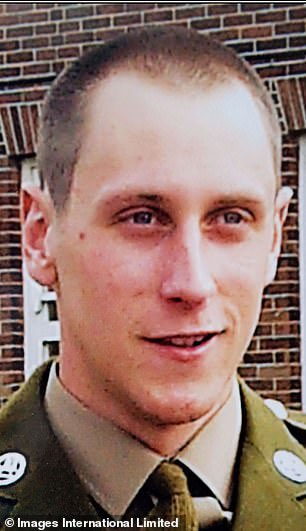 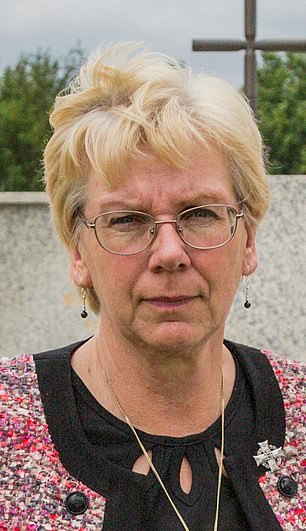 Fatally wounded while on patrol: Private Richard Hunt (left), son of Hazel Hunt (right), had been in the Army less than two years when he became the 200th British soldier to die in the war in Afghanistan. He was fatally wounded when his armoured vehicle was blown up while on patrol near Musa Qala in Helmand Province. Private Hunt, of Abergavenny, Monmouthshire, served with the Royal Welsh Regiment. The 21-year-old, known as ‘Hunty,’ died from his injuries at the Royal College of Defence Medicine in Selly Oak, Birmingham, on August 15, 2009, two days after the explosion. 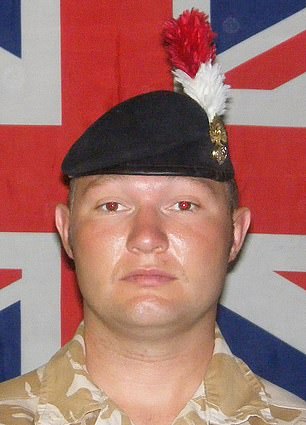 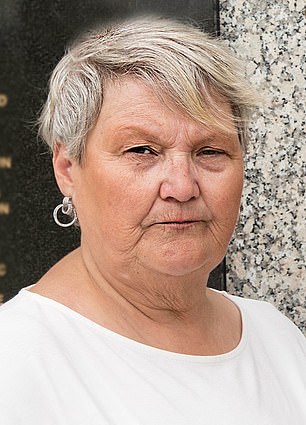 Killed trying to clear landmines: Sergeant Simon Valentine (left), son of Carol Valentine (right), was killed on August 15, 2009, while trying to clear landmines on foot patrol near Sangin, Helmand Province. The 29-year-old was an experienced soldier, from Bedworth, Warwickshire. He had survived tours in Kosovo, Northern Ireland and Iraq, during his time with the Royal Regiment of Fusiliers. Married to his wife Gemma, he was described as a born leader who was loved by his troops.

‘He has caused untold misery while making himself a multi-millionaire at the same time. We do not view him as a man of peace – on the contrary, we maintain he has the deaths of all our soldiers on his hands.

‘This has left us all enraged, bewildered, and heartbroken and we beg you to revoke his knighthood which we believe tramples on our sons’ sacrifices.’

The letter emerged as Sir Keir Starmer insisted his predecessor ‘deserves the honour’ – despite nearly 600,000 people signing a petition calling for it to be rescinded.

The Labour leader also went on the attack, saying Boris Johnson had not ‘earned the right’ to be knighted and that there was a ‘world of difference’ between the two PMs. Sir Keir, who marched against the Iraq War in 2003, added: ‘I understand there are strong views on the Iraq War. There were back at the time and there still are.

‘But that does not detract from the fact that Tony Blair was a very successful prime minister and made a huge difference to the lives of millions of people in this country.’

But Mrs Valentine – whose son Sgt Simon Valentine, 29, was killed while trying to clear land mines near Sangin in 2009 – said she hoped the Queen ‘slips with her sword and cuts his bloody head off’. She added: ‘Tony Blair should not be rewarded for taking our sons from us. He deserves nothing less than a war crimes trial. 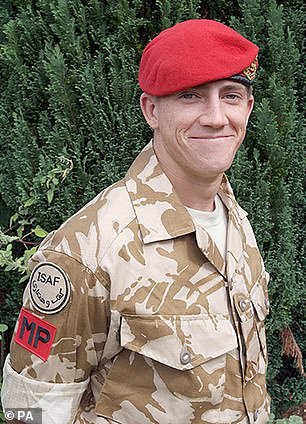 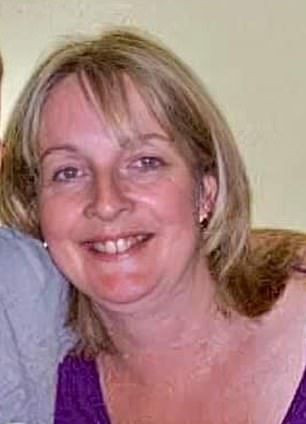 Shot in ‘friendly fire’ incident: Lance Corporal Michael Pritchard (left), son of Helen Perry (right), was killed in a ‘friendly fire’ incident in Sangin on December 20, 2009. The 22-year-old soldier, of the 4th Regiment, Royal Military Police, was born in Maidstone, Kent, but lived in Eastbourne, East Sussex. He had been deployed to an observation post to check Taliban fighters were not planting IEDs (improvised explosive devices) on a road. It is thought that another British soldier fired at him thinking that L/Cpl Pritchard was an insurgent, an inquest heard. 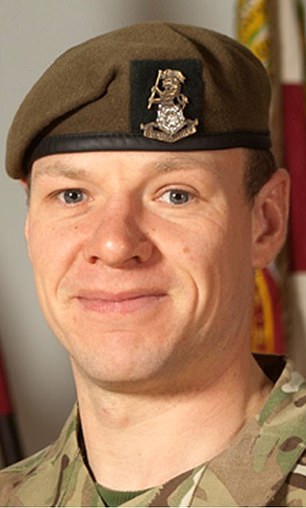 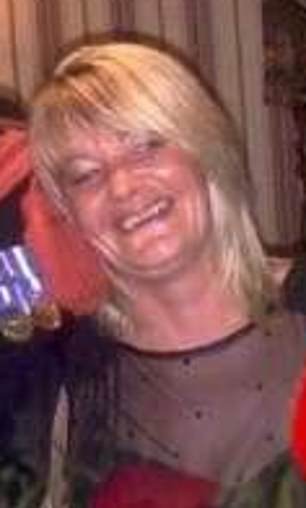 Gunned down by rogue policeman: Sergeant Gareth Thursby, 29, (left) son of Caroline Whitaker (right), was shot dead by a rogue Afghan policeman alongside another British soldier at a checkpoint in Helmand Province on September 15, 2012. The married father of two from Skipton, North Yorkshire, served in the 3rd Battalion, Yorkshire Regiment. He was an inspirational leader known to his men as ‘Dad’. An inquest heard that no motive was found for the lethal attack.

‘The troops always referred to our Queen as “the boss” and now I feel so let down by this knighthood.’ Mrs Hunt, whose son Private Richard Hunt died aged 21 following an explosion while on patrol in Musa Qala, said she would give back her Elizabeth Cross in ‘disgust’.

‘I will never call him Sir no matter what happens. He’s not fit to lace our soldiers’ boots,’ she added. And Mrs Munday-Baker, who lost her trooper son James Munday at the age of 21 when his vehicle blew up, said the gong was a ‘travesty’.

She added: ‘Blair should have his head bent, alright, but in shame, not to receive a knighthood. He should be made to walk through a field of IEDs like our children did.’ Mrs Perry, who lost her military police officer son Michael Pritchard, 22, to a ‘friendly fire’ incident, said she ‘nearly choked’ when she heard about the honour.

And Mrs Whitaker, whose 29-year-old son Sgt Gareth Thursby was shot dead by an Afghan policeman in 2012, said the bereaved mothers were members of a ‘club’ none of them wanted to belong to.

‘On the days I can’t hold it together they pick me up and I do the same for them when they fall,’ she said. ‘I can’t get my head around this decision to knight Blair. Our sons may have been cannon fodder to him, but they were our flesh and blood.’

The Prime Minister’s official spokesman yesterday refused to comment on the issue, saying that knighthoods were a matter for the Queen. However he pointed out that ‘every former prime minister before Tony Blair has received the Order of the Garter or Thistle’.

Asked whether Mr Johnson believed the petition’s signatories were wrong, the spokesman said it was ‘a matter for the Queen’.