WASHINGTON — Reps. Troy Nehls, R-Texas, and Sara Jacobs, D-Calif., were only a few days into their tenures as lawmakers on Jan. 6 when a mob attacked the U.S. Capitol, trapping them in the House chamber.

They are just two of the 64 House freshmen who arrived in Washington a year ago. But even after they experienced the riot that day in the same room, their reflections about what happened couldn’t be more different, emblematic of the divisions about that day that remain on Capitol Hill.

Troy Nehls, dressed in a blue shirt and a jacket, took a seat in the House chamber along the aisle on Jan. 6, hoping to get a chance to meet Vice President Mike Pence when he walked by.

“I wanted to say: ‘Hey, I’m a member of Congress.’ I’ve been here for three days, and I’ve got Vice President Pence within 10 feet of me!” he said.

But within hours, Nehls, a former sheriff, would shed his jacket and find himself helping to barricade the chamber doors against rioters who were trying to break inside — with that blue shirt becoming one of the day’s most iconic images.

He felt the doors shake. The glass shattered by a flagpole — a dark irony not lost on the man who served in the Army Reserves for more than 20 years. 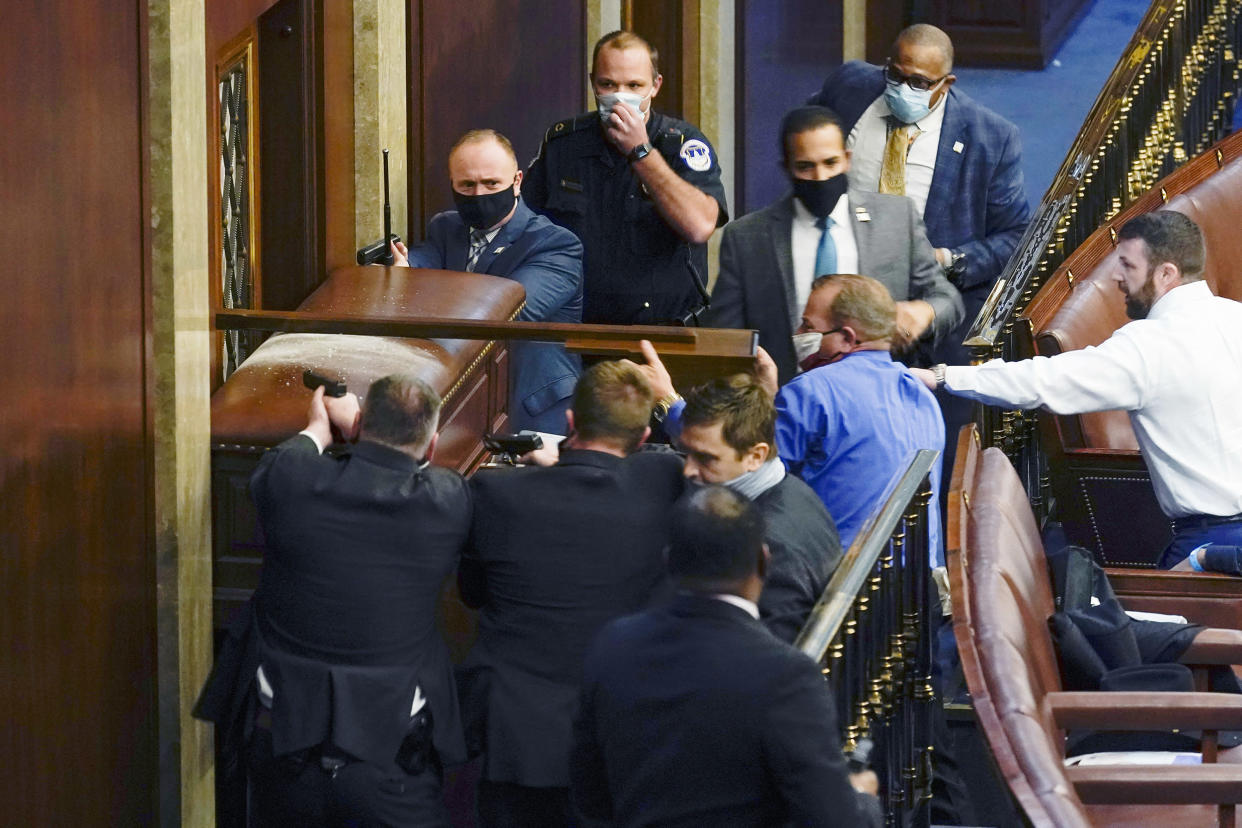 He was within shouting distance of the rioters who were trying to get inside.

“I had my Texas mask on, and he looked at me through that broken glass, and he said: ‘You’re from Texas. You should be with us.’ … And at that point I said: ‘No, sir, I cannot support what you’re doing. This is criminal.’”

Nehls believes he was there to help hold off the rioters thanks to “a little divine intervention.”

“I’m a man of faith, and I believe He had me there at that time for that purpose,” he said.

Over the last year, he has committed himself to understanding what led to the violence that day — “there were many, many mistakes that were made” — while drawing a controversial distinction that not everyone who infiltrated the Capitol was there to wreak havoc.

Sara Jacobs still can’t watch videos of the Jan. 6 riot with the sound on.

“There’s this buzzing that I will never forget,” she said, describing the sound that came from the gas hood she wore in the chamber. “It’s all-consuming, because you have this hood on, and it’s like all you can hear.”

Before she was elected to Congress, Jacobs worked for the State Department and the United Nations. She never thought that one of her first times in the House Chamber would be where she would come the closest to dying.

Jan. 6 was far from the day she had planned.

Jacobs had gone to the Capitol that morning ready to certify an election, learn her way around her new workplace and bask in the glow of Democrats’ control of Congress — making plans to hold a toast with fellow freshmen in honor of the Democrats’ Senate victories in Georgia.

Instead, as rioters neared the House chamber, she huddled in the second-floor balcony overlooking the floor, pulling the gas hood onto her head while simultaneously introducing herself to her new co-workers.

Jacobs said her instincts as a millennial who came of age in the era of mass shootings kicked in when law enforcement officers evacuated them from the chamber. She was convinced that there could be a gun around every corner.

A year later, she fears that Jan. 6 was a harbinger, a flashpoint for a struggling democracy like those she had previously studied as an outsider looking in. “I feel like a lot of people believe that January 6th was the end,” she said, “and I believe January 6th was the beginning.”

She is keenly aware that the way she began her congressional tenure is virtually unique.

“When you first start in Congress, they say, ‘Whenever you stop feeling that feeling inside of seeing the Capitol Dome, that’s when you need to leave Congress,’” Jacobs said. “And I’m sitting here like, well, they tried to kill me here on my fourth day. Of course I don’t feel the same kinds of warm and fuzzies about this place. That is where I came closest to I’ve ever felt to dying.”

03/01/2022 World News Comments Off on The Jan. 6 attack through the eyes of two freshmen lawmakers
Lifestyle