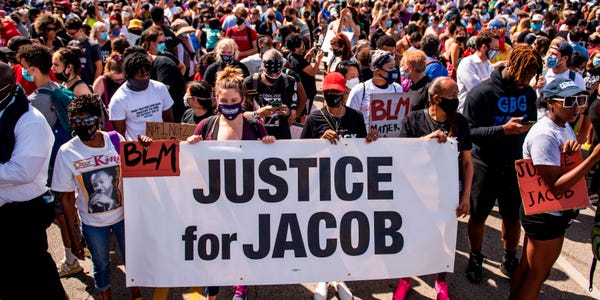 The sole survivor among the three men shot in the Kenosha protest shooting might have never made it if he didn't bring his own medical kit, he said in his first interview about the incident.

"That was a grievous wound. Had I not had my training and proper equipment … to treat a gunshot wound, I might not be here doing this interview," Gaige Grosskreutz told CNN on Tuesday, for an interview published on Friday.

22-year-old Grosskreutz and two others were shot on August 25 during demonstrations protesting the police shooting of Jacob Blake.

Grosskreutz, who lives in Milwaukee, attended the Kenosha protests after seeing the video of Blake being shot. He's a trained paramedic, so he brought his medic bag to the protests in case he needed to help anyone.

He told CNN he also brought his licensed gun, saying he was concerned for people's safety after reading about calls to arms on Facebook in a group called "Kenosha Guard." Facebook has since said the Kenosha Guard post violated its militia organization policy, according to The Verge.

Grosskreutz said he never shot his gun at the protest, but his medic kit came into use when shots rang out.

"I never fired my gun," Grosskreutz said. "I was there to help people. Not hurt people."

"He was down there to try to provide assistance to everybody indiscriminately," Grosskreutz' lawyer, Kimberley Motley, told CNN.

According to a criminal complaint, Rittenhouse shot Rosenbaum after Rosenbaum threw a plastic bag at him and tried to wrestle away his rifle. Video of the incident shows Rittenhouse running away as people chased after him.

Prosecutors say Rittenhouse then shot Huber when he also tried to take the teen's rifle. When Grosskreutz approached him with a pistol in his hand, Rittenhouse opened fire again, prosecutors say.

Grosskruetz can be seen in video of the incident shouting for help from paramedics. He used a tourniquet from his own medic kit to help alleviate bleeding, and police then drove him to the hospital.

"I was shot point-blank with a .223 round from the shooter," Grosskreutz told CNN. "And I am now missing 90% of my bicep. This has not been easy emotionally, physically. I'm in constant pain, like excruciating pain that just doesn't go away — both in my arm, in my heart."

Rittenhouse's attorney, John Pierce, told NBC News that he plans to argue that his client shot in self-defense.

"We will obtain justice for Kyle no matter how hard the fight or how long it takes," he said.