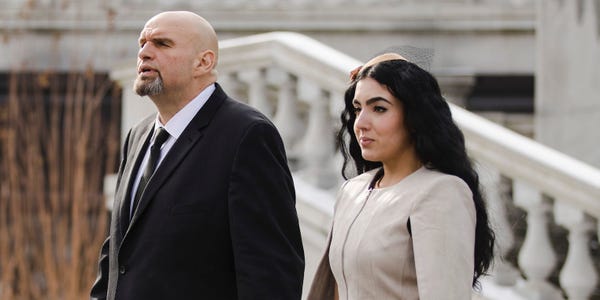 Gisele Barreto Fetterman, the wife of Pennsylvania's Lieutenant Governor John Fetterman, says she was verbally assaulted while grocery shopping over the weekend.

She recorded part of the incident from her car and shared a two-second clip on Twitter Sunday in which a woman can be seen looking at her and saying, "You're a n—–" before walking away.

Barreto Fetterman, who was born in Brazil and became a US citizen in 2009, told CNN that she was at an Aldi grocery store in Forest Hills, outside Pittsburgh, buying golden kiwis when the woman approached her in line.

"A woman walks past me and stops and looks at me, and then says, 'Ugh, there's that n-word that Fetterman married," Barreto Fetterman, who had gone into the store without any security guards, said. "And, she said 'You don't belong here,' and she called me a thief, and uttered some other ramblings. And, (she) kept walking, went to the other aisle, came back, said a few more things."

Barreto Fetterman told CNN that the woman later approached her car outside the store, and that's when she called her the n-word a second time.

The woman who accosted Fetterman has not been publicly identified.

Barreto Fetterman told NBC News that the incident reminded her of her childhood when she and her family lived in the US undocumented for a decade after fleeing violence in Rio de Janeiro.

"Words really matter. I've had an entire career, I'm a citizen, I'm second lady, I've done all this work, and within seconds I was an 8-year-old little scared undocumented child again," she told NBC News. "By the time I got to the car I was bawling and trying to compose myself and look strong, but I just don't have it in me."

In a statement to CNN, Aldi criticized the woman's actions.

"We must stand together against racism in America. We absolutely do not tolerate harassment, discrimination or mistreatment of our customers or employees, and we condemn it in all forms," the statement reads. "We are reaching out to the Second Lady today to reiterate our stance, and ensure she feels safe and welcome in our stores anytime."

"No one should ever be made to feel unwelcome in our commonwealth because of their race or ethnicity," he wrote on Twitter. "Gisele Fetterman spends much of her time making our state and world a better place and she — and every Pennsylvanian — deserves our respect, not the hatred too often displayed by people who seek only to further divide this country at a time when unity is so desperately needed."