Waiting for the other shoe to drop! This was the expression correspondents would use to describe the aftermath of an endless series of Middle East convulsions.

Sure enough and before too long a shoe would drop in the form of revenge air strikes, or acts of sabotage, or a quid pro quo assassination, or a cross-border incursion. Middle East players are not much given to turning the other cheek. However, in the case of what is a blatant assault by Iran at the very heart of Saudi Arabia’s oil industry, retaliatory options are limited and risky. 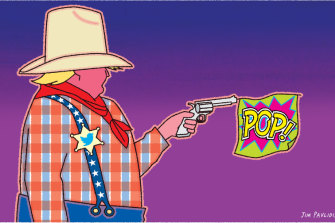 The best option for all concerned is to de-escalate the conflict, ease sanctions to encourage Iran to return to the negotiating table, and redo the 2015 Joint Comprehensive Plan of Action that, despite its imperfections, was working.

The JCPOA, negotiated painstakingly over several years and signed by the five permanent members of the United Nations Security Council plus Germany, provides inspections safeguards against an Iranian breakout acquisition of a nuclear capability. 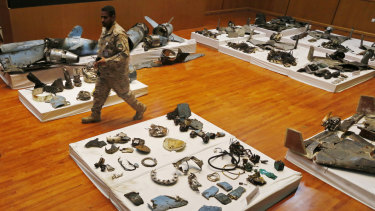 A Saudi military officer walks by what was described as the remains of Iranian cruise missiles and drones used in an attack that targeted the heart of Saudi Arabia’s oil industry. Credit:AP

Let’s repeat. The JCPOA was working before Trump recklessly dragged the US out of it and, last year, re-imposed harsh sanctions. These have brought Iran’s economy to its knees, effectively cornering the regime.

Predictably, Iran is not taking this lying down, although few would have predicted such as audacious response as a strike at the heart of the Saudi Arabian oil industry and the global oil economy. What the Iranian attacks tell us in a broader sense is that Iran retains the capability to cause mayhem in the Gulf in an asymmetrical conflict with the US and its allies. Oil installations the length and breadth of the Gulf are vulnerable from low-flying land-based cruise missiles; tanker traffic is exposed; oil pipelines are, likewise, susceptible to attack; and so, too, are warships with limited room for manoeuvre in confined Gulf waters.

Whether a Trump administration is capable of backtracking on one of the signature foreign policy decisions of the presidency, namely withdrawing from the JCPOA, is moot. Not least of issues for the White House is further erosion of America’s foreign policy credibility. Failure to respond in a way that either relieves tensions or deters Iran will weigh heavily on Washington’s ability to maintain its authority in the region. In Tehran, the New York Times quoted Ali Bigdeli, a political analyst, as saying of the US President: "He is not a lion – he is a rabbit."

In Washington, hawks like the retired four-star general Jack Keane, who has the President’s ear, have been urging retaliatory air strikes. In Keane’s view the US needs to "impose a cost" on Iran that would deter it from further destabilising the region.

All this reminds us of the original folly of the rush to war in Iraq in 2003. Trump’s calculation that the last thing America needs is further conflict in the Gulf is laudable, but his actions have belied his instincts.

What should be kept in mind in calculating risk and reward in the latest situation are the staggering costs to the US of its wars in the Middle East. In a country that is running trillion dollar budget deficits, the mounting bill for its post September 11 wars has now reached US$6 trillion, according to the Costs of War Project at Brown University’s Watson Institute. Half a million people have been killed in these post September 11 conflicts. War with Iran would resemble a tea party compared with those in Iraq and Afghanistan.

In light of this and polls indicating little appetite in American for renewed conflict, it’s not surprising the Trump White House has dialled back on rhetoric first heard in the immediate aftermath of the cruise missile strikes against Saudi Arabia’s Abqaiq and Kurais refineries.

Secretary of State Mike Pompeo was quick to describe the attacks as an “act of war”. This implied the US would feel compelled to respond militarily. In Washington over the weekend, the Trump White House may have indulged a state visit by the Australian Prime Minister, but away from the ceremonial artifice the administration’s real preoccupation will be whether and how to drop a shoe.

Tony Walker is a former Middle East correspondent for the Financial Times and Fairfax newspapers.

22/09/2019 World News Comments Off on The world is watching: the Middle East is primed
Lifestyle