Cars were piled up, bumper to bumper, for three kilometres from the warehouse back down the highway – all the way to the West Gate Bridge – and David McNamara was the reason why.

The Foodbank Victoria CEO had spent pandemic lockdowns running supplies all over Melbourne to those in need, sometimes out of his own car. When demand kept soaring, he turned the charity’s aircraft-hangar-sized warehouse into a drive-through. People could pick up fresh groceries and other staples for free, no questions asked. But, by the state’s sixth lockdown in 2021, the line was so long “the cops had to shut us down”, McNamara says. 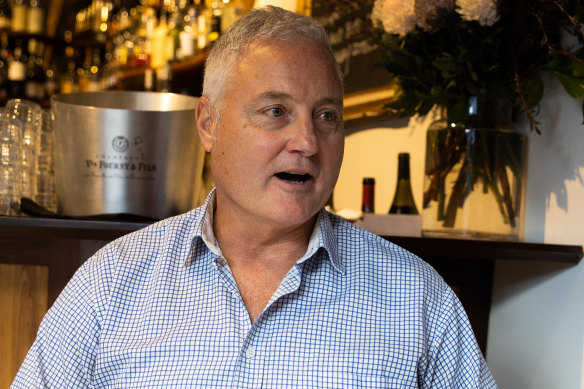 “Everyone deserves a seat at the table.” Foodbank CEO David McNamara at Bellota wine bar.Credit:Jason South

”We’d had 450 cars come through just in the first hour. That’s how much people were hurting. There were single mums with kids crying from hunger in the back seat, Afghan war vets, but also business owners in their shiny SUVs.”

A year on, that demand hasn’t gone away. In recent months, Foodbank even had to run its first drive-throughs outside a lockdown to help Victorians cope with a sharp cost-of-living spike in the spiralling economic fallout from Russia’s war in Ukraine.

“Food really is the linchpin to so much, not just for the individual but to hold societies together,” McNamara muses. He’d know. A country is invaded in eastern Europe, a deadly virus spreads throughout the world, and suddenly he’s shutting down the West Gate Bridge.

We should probably just count ourselves lucky whenever we sit down to a good meal, full stop. And I am feeling lucky today. We’re at Bellota Wine Bar in South Melbourne, a cosy European bistro co-owned by McNamara’s brother, Michael, and boasting a grand cellar of wines thanks to its adjourning wine shop. I’m ripping into a golden quartet of sausage rolls, which, as a particular favourite of McNamara himself, I don’t feel unreasonably childish in ordering, especially swirling my glass of nebbiolo.

McNamara is having the salt-baked beetroot entrée and then the risotto, on a rare long lunch break. But he admits he and the rest of the family are often hanging around Bellota for a feed.

The eldest of four brothers, McNamara has lived his life in busy kitchens, first helping his mother and grandmother serve the international guests of his father’s work who often filled the house when he was a kid, then two decades spent running or working at some of Melbourne’s livelier restaurants, including a long stint for the Mario brothers at the Continental Cafe in Fitzroy, before transforming a Sacred Heart soup kitchen into a free restaurant for those in need.

These days, though, he likes to say he’s catering for 50,000 people a day through Foodbank, the state’s food relief service and “charity pantry”. It supplies close to 500 not-for-profit groups, feeding “the equivalent of an AFL grand final crowd every two days”. 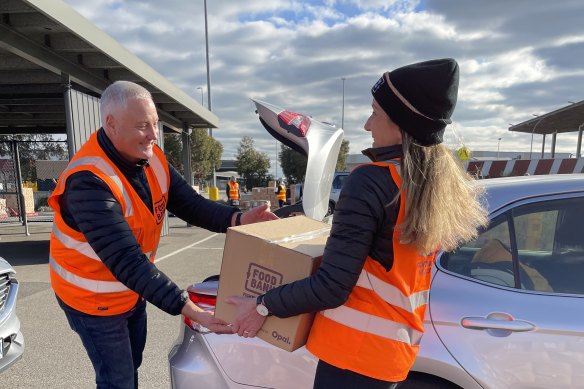 It’s a mammoth logistical feat – greater even than those rowdy days as a chef and manager at the Continental music venue in Prahran back in the day, running live music shows for headliners such as K.D. Lang and Harry Connick Junior, and “piss-taking in the heat and sweat of [the kitchen] when the dockets were piling up and you’re finishing at one in the morning still high on adrenaline knowing you’ve got to be back for the breakfast shift at six”.

Still, he insists he’s the most subdued of the McNamara clan. (“We were usually the loudest family in the restaurant growing up.“) Perhaps more calm than reserved, McNamara has been at the centre of many a storm to hit the state since he joined Foodbank in 2008. In fact, just eight months into the job, with the-then CEO on leave, he found himself running the show during the devastating Black Saturday bushfires. “What no one had really explained to me then was that we don’t just supply charities, we’re also [a key plank] of the state’s disaster response,” he says.

They helicopter food to flooded towns and load up army trucks to supply fire-zone evacuation centres (with extra energy bars for the firefighters). “We learned a lot after Black Saturday so when Black Summer came, we were ready. We ended up using an oil rig carrier to take the first food into Mallacoota after they were hit.” 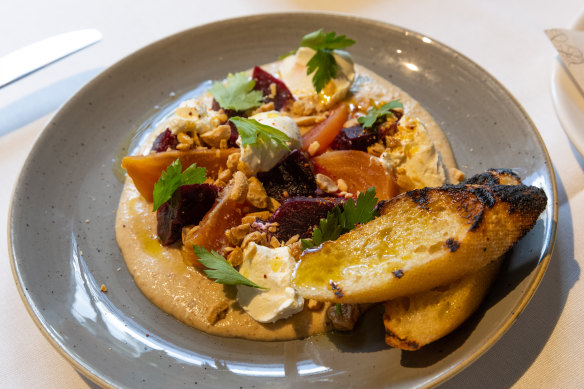 He admits he still gets tingles recalling the generosity of people that summer: at the peak of the crisis, nearly 1500 people were turning up with car boots full of groceries to donate each day. But more devastation was to follow as the worst pandemic in a century shut down much of the world –including supply chains.

Suddenly – the shelves stripped bare in that first flurry of panic-buying – Melbourne “had a taste of what one in six people deal with every day here, not being able to get enough food”, McNamara says. “It used to be people on the street. Now, it’s people in your street too. Well, people helped during the fires. So we’ve started donating back to them with the drive-throughs.”

Before he sidestepped into the charity sector from food, IT and even a brief stint in banking (“I hated it”), McNamara used to think that it was just people sleeping rough who would need free food. But when an old friend from his chef days suffered a mental health crisis and fell on hard times, McNamara went to visit the Sacred Heart soup kitchen he’d been “raving about”. In that big dining hall, there were families, elderly pensioners; “a whole cornucopia of humanity”. But “then I looked at the food that was being served with the absolute best intention. And I thought ‘oh my god, my mate’s eating this’. This is something I can fix.”

He tossed in his restaurant career and turned the hall into a free French and Italian bistro, bringing in a second chef and training many of those using the service as baristas and kitchenhands. “We brought in colour and fabrics to make the dining room less institutional and within a couple of months, you’d notice the change, just in the noise. There was more laughter. People had started to fill out in their faces, they looked healthier.”

That buzz he remembered from his own childhood “hearing amazing stories from around the world” at the dinner table, was now in the air. 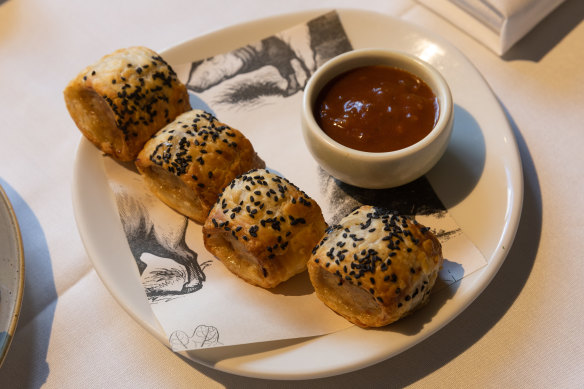 A few years later, after complaining to Foodbank, which supplied Sacred Heart, about the lack of fresh produce, he found himself as its newest hire. He’s since made healthy food central to its mission – going direct to farmers for their “ugly” unsellables and holding pop-up fresh markets in charity car parks (“often they’re just working out of a regular fridge”) or mobile supermarkets in converted buses to let people pick out what they need.

That all costs money, forcing the charity to fundraise outside government grants. Before the McNamara era, Foodbank ran on more of “a surprise chain than a supply chain”. “We had to take what we could get. Now we’ve gone from sourcing 35,000 kilos of fresh fruit and veg a year to over two and a half million.”

And what else do people need? “Exactly what you do: bread, milk, meat – meat’s a nightmare – pasta, noodles. We want people to thrive, not just survive. They’re already forced into these poor diets.”

Like his restaurant days, McNamara admits he doesn’t always get much sleep, though he’s kept up a lockdown habit of daily ocean swimming at Williamstown beach. (His eyes light up as he tells me about the seal that bobbed up alongside him the morning before.)

He’s also been mapping disadvantage across the state, surveying charities and examining government statistics to better understand how to tailor offerings to each neighbourhood’s social and cultural needs. “This is a sector that’s run on heart, but maths never hurts,” he smiles. He rattles off the numbers with ease over his risotto. “If you’re a food-insecure person, you’re going to need 50 kilos of food a year, which is at least 100 meals. We want to make up about 70 per cent of that, so 35 kilos. Right now, we’re sitting at about 21.“

That leaves a target of 14.2 million kilograms of healthy food to source in the next four years.

One shortcut? Feeding the most vulnerable – children – first. Since Foodbank partnered with the Victorian government in 2016 to launch a free breakfast program in public schools, it’s expanded to more than a thousand across the state , offering emergency lunches and meals for school holidays too. One school requested the program after a boy was mistakenly scolded for chewing gum – it turned out he was chewing paper as there was no food at home. “But it’s not just ‘the poor kids are having breakfast now’,” says McNamara. “It’s all the students, it becomes a community. You see truancy go down, bullying go down, even grades improve.”

He remembers one eight-year-old he met at a regional school – half his family were in jail, and he was already in trouble with police. “Breakfast club changed that, he started coming in again, and they figured out that he loved dancing. He even showed me a dance. Now he’s in secondary school, still dancing. “

There are plans in the works to partner more closely with health services too and offer a “food prescription” of supplies, in consultation with doctors. Already Foodbank’s lively cooking class for parents and students has proven a hit – there, everyone gets a box of fresh ingredients and recipe book to take home.

“That’s about getting the kids engaged, helping families open up to each other, to get them feeling that tingle that I used to feel cooking with my mum and my nana.”

Big picture, McNamara wants to “do what Rosie Batty did for domestic violence: remove the shame of not being able to feed your family”.

As the plates are cleared away, he recalls listening to a reporter once question how singer Sting could truly call himself a social campaigner while drinking champagne in a villa. “And Sting said: ‘I believe everyone should be able to live like this’. 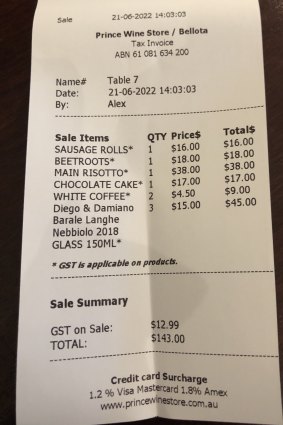 The bill at Bellota wine bar after a long lunch (and cake) with David McNamara.Credit:

“Well, everyone should eat like this,” McNamara says. “Everyone deserves a seat at the table. ”

23/09/2022 World News Comments Off on ‘Then the cops had to shut us down’: the ex-chef stopping Victorians going hungry
Lifestyle