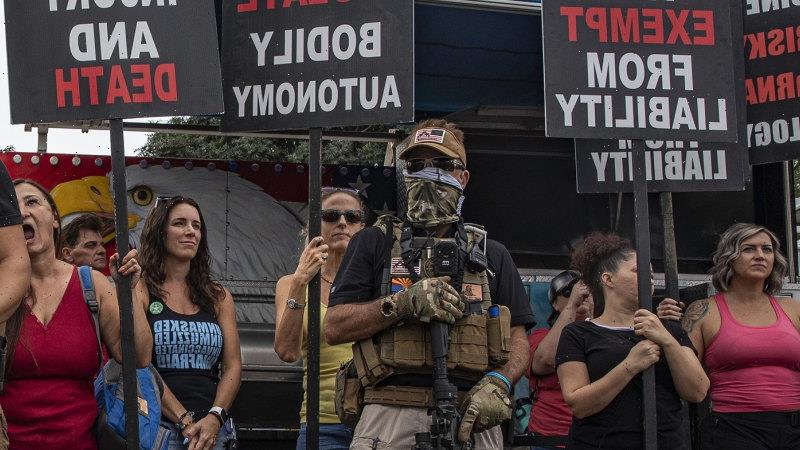 New York: Before he died of COVID-19 in September, Nick Bledsoe was not shy about publicly sharing his opposition to masks and vaccines on Facebook. In April, Bledsoe, an auto mechanic from Opelika, Alabama, added a frame declaring “I don’t care if you’ve had your vaccine” to his profile photo and urged his father not to get the shot.

During the summer, he posted a petition against school mask requirements, cursed President Joe “Biden and his vaccine,” and in his final post, shared a video casting doubt on the safety of vaccination against the coronavirus. Then, with his last words before being placed on a ventilator, Bledsoe agreed to get vaccinated once he recuperated, according to his father. But he never left the hospital, dying at the age of 41 and leaving behind a wife and four children. The day after Bledsoe died, his father started urging those who were unvaccinated to get the shots. 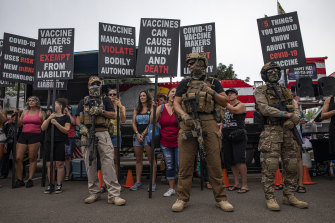 The details of Bledsoe’s death and desperation-fuelled change of heart stayed largely confined to his Facebook page. That is, until they appeared in screen-shotted detail the following week on a website that compiles the coronavirus deaths of vocal vaccine opponents.

“They were making comments that he should have died, that he deserved to die,” said his father, Hal Bledsoe. “It hurt.”

These and many other losses fill a host of websites that claim to be educational, but are fuelled by schadenfreude at the deaths of the unvaccinated whose social media posts included Trump memes and conservative conspiracy theories. An exhortation on one such site reads: “Everyone listed on this site helped spread COVID-19 misinformation and then paid the price for their views. Share to stop others from making the same mistake.” 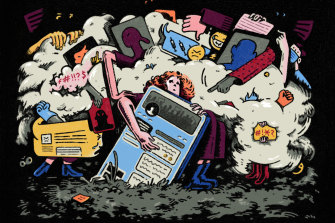 The social media profiles of anti-vaccine victims of the pandemic have made them and their families targets of trolling, even after their deaths. Credit:Susan Farquhar/The New York Times

Just as mobile phones have changed American policing, social media has transformed the way Americans chronicle their lives and, increasingly, their demise.

It has also resulted in many people leaving behind a trail of ideology that’s hard to untangle from their untimely deaths. And in a hyperpartisan culture plagued by “alternative facts” and debates over the most basic scientific realities of the pandemic, many among the vaccinated are eager to brandish such accounts as the final, indubitable proof that the COVID deniers and those who are anti-vaccine are dangerously misguided.

Tapping into the outrage are Reddit forums where there are entries focused on “suicide by COVID” and “awards” granted to those who died. The cruel sentiments have migrated offline as well, manifested in things like gravestone lawn ornaments engraved with the phrase “I did my own research,” images of which were shared widely on social media before Halloween.

Colin Wayne Leach, a psychology professor at Barnard College who has studied emotions like schadenfreude and gloating, said the sentiments underpinning these websites are an outgrowth of the nation’s extreme polarisation. “When it’s a serious rivalry, which is what politics is these days, it’s not just taking a little pleasure in somebody’s misfortune,” he said. “In many ways, it’s seeing your enemies suffer because of what they believe. That is the sweetest justice, and that’s partly why it’s so satisfying to the other side.”

Furious with the anti-vaccine memes and conspiracy theories flooding social media, one administrator of such a site said he sought to highlight the political and geographic patterns of the Delta wave, which has disproportionately torn through conservative communities and red states with low vaccination rates.

The stories are often remarkably similar: Anti-government memes and posts dismissing the coronavirus or vaccines give way to announcements about feeling sick and testing positive for the virus. Then there are often requests for prayers. Sometimes there are selfies taken while hooked up to breathing machines and fearful updates about imminent intubation. Most end with loved ones sharing RIP posts. Many include links to GoFundMe campaigns created to defray funeral costs.

Among the dead are a father and son, husbands and wives, an Idaho man whose final post was a petition opposing a university vaccine mandate, a nurse who campaigned against masks in schools, and a 50-year-old hospitalised COVID patient who declared: “I’m still not screaming for people to wear their mask or get vaccinated” on Facebook three weeks before he died from the virus. “I say live free,” the man wrote.

While some of the websites’ comments are vicious, other readers have expressed thanks for providing a record of anti-vaccine deaths that have helped them persuade sceptics to get the shots.

The creator of at least one of the sites asks readers “not to cheer” the deaths, but the Facebook profiles of the deceased routinely get bombarded with mockery, a grim legacy their loved ones must contend with even as they mourn.

The design of social media platforms amplifies moral outrage and sets off the brain’s reward centres through punishment and shaming, particularly shaming that is motivated by schadenfreude, according to Molly Crockett, a psychologist at Yale University. But “likes” and sharing expressions of moral outrage bolster more “extreme” views and can lead to harassment, the spread of misinformation and increased polarisation, some studies have found.

“Play stupid games, win stupid prizes” is a common refrain on Facebook pages of the anti-vaccine dead, as is “misinformation kills.” One commenter who mocked Nick Bledsoe’s death on Bledsoe’s Facebook page was asked by another Facebook user to remove the remarks out of respect for Bledsoe’s family. The commenter refused. “I am not the problem, he WAS,” she wrote.

Reached by phone, the commenter said she stood by her online sentiments. “I do believe in everything I say,” she said. “I can be very passionate, sometimes a little too passionate.” She declined to discuss the matter further, but shortly after the call ended, her Facebook comments disappeared.

Grappling With Grief, and Critics

Drew Scott and his wife, Farrah Scott, both 45, chose not to get vaccinated because they felt they were young and healthy enough to survive. The couple, who were high school sweethearts, also had deep suspicions about the virus’s origin and the safety of the vaccines.

“Drew put his faith in the Lord, not man, and he questioned not only the virus being released, but the vaccine being created,” said Farrah Scott of her husband, a machine operator in Whitesburg, Georgia.

On Facebook, Drew Scott questioned the vaccines and the outcome of the 2020 election, often enough to draw the attention of a childhood friend, Richard Green, a paleogeneticist at the University of California, Santa Cruz, who is vaccinated and tried to gently dispel the misinformation.

“These are my friends, how can you not engage?” Green said in a phone interview. In late August, Drew Scott wrote a post comparing the vaccines to Russian roulette, and the comment section is filled with Green’s efforts to correct conspiracy theories. Much of that conversation was later posted to a site that mocks those who died and remains there despite Green’s efforts to have it removed.

“Drew’s so much more than some dude who didn’t trust the vaccine,” he said, recalling a talented guitar player who loved Pearl Jam and was deeply devoted to his family.

By August 31, Drew Scott was hospitalised with COVID pneumonia, said his wife, who was also infected but posted frequent Facebook updates on his ordeal, from oxygen mask to the ICU to ventilator. He died on September 10, leaving behind Farrah Scott, their three grown children and a grandchild, with another on the way.

Farrah Scott said she felt as if her husband sacrificed himself so the rest of their family could stay safe, noting that their 19-year-old daughter got her first shot not long after he died. “Obviously the unvaccinated are the ones dying,” she said.

Yet Farrah Scott and their other daughters have not been vaccinated, and that includes their eldest, a nurse at the hospital where Drew Scott was admitted and who was able to say “I love you” to him right before he was intubated, never to regain consciousness. She has refused the vaccine because she is pregnant and worries about its effects on the baby, Farrah Scott said. Federal data found that COVID-19 poses a significantly higher risk to women who are pregnant, and far outweighs the risks of vaccination.

Even as Farrah Scott and her daughters grapple with grief, they have also had to focus on deleting the scathing comments that have flooded their social media accounts. “Within hours of him dying, they were attacking on Facebook,” Scott recalled. “They said, ‘Had your husband got the vaccine you would be with him now,’ or ‘How good of a man was he? He wouldn’t even get vaccinated.’ Just very cruel jabs.”

Still, Scott said she did not want the people behind those comments or their families to face similar treatment, “even those that are trolling pages and being ugly”.

30/11/2021 World News Comments Off on They died from COVID. Then the online attacks started
Lifestyle