They don’t expect thanks, nor do they seek the spotlight. They’re the kind souls quietly doing good works in our community, year after year. If you’ve had enough of celebrity news, here is the antidote, our local heroes.

When four kangaroos entered the North East Link roadworks at Greensborough in Melbourne’s northeast a few months ago, emergency services called the charity Vets for Compassion to help.

With the aid of tranquiliser darts, the charity’s founder, veterinary surgeon Dr Elaine Ong, and fellow volunteers including her vet husband Dr Chris Barton caught the animals and later released them in the bush. 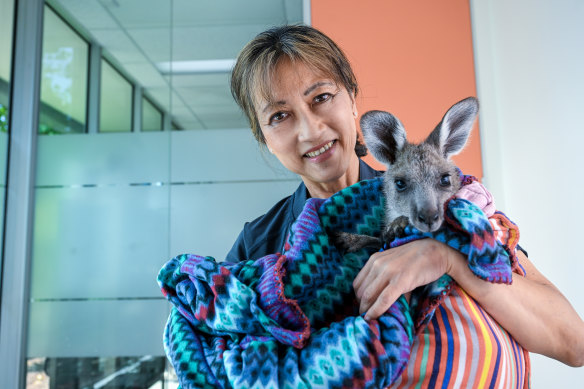 They weren’t paid for their work; they did it for the love of animals.

While Ong treats mostly dogs and cats by day at Balwyn Central Vet hospital, in Melbourne’s east, she does unpaid animal rescue work at all hours. She offers discounts and does free call-outs for Guide Dogs Victoria.

Ong, a Malaysian migrant, hopes her AM – Member in the General Division of the Order of Australia – in the Australia Day honours on Thursday will prompt more help for injured wildlife.

Vets For Compassion, which she founded in 2009, gets no government funding and relies on donations.

Ong has visited China 15 times at her own expense to train local vets in desexing stray dogs and cats.

About 25 years ago when volunteering after a bushfire in north-eastern Victoria, she saw a kangaroo on fire and felt helpless at not being able to catch it.

“I remember thinking, ‘we can’t catch this poor animal’,” she said.

After volunteering in the wake of the 2009 Black Saturday bushfires, Ong obtained a dart gun licence to catch injured animals.

Ong treated injured and distressed animals after the Mallacoota bushfires in 2019, and was among 43 volunteer vets and nurses who helped out during the floods in Lismore, NSW,

Ong often rescues kangaroos that have been lost or hit by cars amid Melbourne’s construction boom and urban sprawl.

Her heart goes out to them. “We’re bulldozing through their habitat,” she said. “There was one poor kangaroo in Templestowe that ended up dashing on to a busy road, was hit by a car and we had to put it to sleep.

“During development we’ve forgotten about our kangaroos. We just push them out and hope they find a place to live.”

“We volunteers feel that they are forgotten and we capture them humanely and help them. Otherwise they end up on the road and there’s nowhere for them to go.”

Another honours list recipient, Fred Alale, will this weekend enjoy a very Australian pastime – a barbecue with family and friends beside the Murray River at Echuca.

Nigerian-born Alale has been recognised for his service to Victoria’s African communities with an AM, a member in the General Division of the Order of Australia.

The 45-year-old is a chartered accountant who migrated to Australia from the UK in 2010 and cofounded the African Music and Cultural Festival held every November at Federation Square. 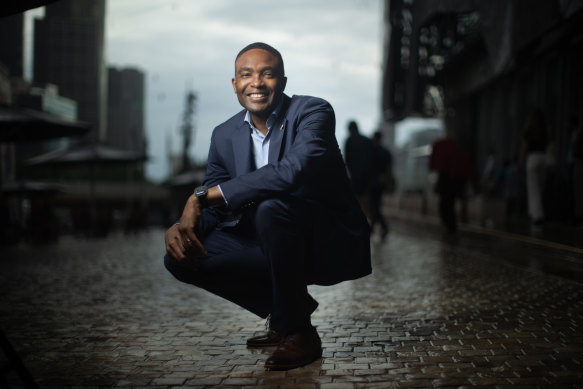 Fred Alale has been recognised for his service to the African communities of Victoria. Credit:Simon Schluter

It draws 40,000 people, offering food, music, dance, crafts and clothes from 35 African communities. “We bring the vibes, sounds, tastes and rhythms of Africa into the heart of Melbourne and create and atmosphere where everyone has a good time,” Alale said.

“It’s also a platform where the wider community can engage and learn more about their fellow Australians of African heritage.”

Alale also volunteers helping organise Africa Day Australia events each May, such as forums on community issues, a sports festival, a talent quest and a gala dinner at Melbourne Town Hall for over 400 people.

Alale worked with the state government on the African communities action plan that aims to address issues such as mental health, jobs, unemployment and youth engagement.

He is also active in community groups, such as a resident’s association and a community garden in his suburb of Waterways, near Mordialloc in Melbourne’s south-east.

He says growing up in Lagos, Nigeria, his mother, Stella, “instilled in me the value of giving back and helping others”.

“It’s something I’ve always been passionate about.”

In 2000, when Carmelo “Charlie” Desira retired from his job as a postal transport manager, a priest at Holy Eucharist Catholic Church in St Albans asked him to open a food bank for refugees and the poor. 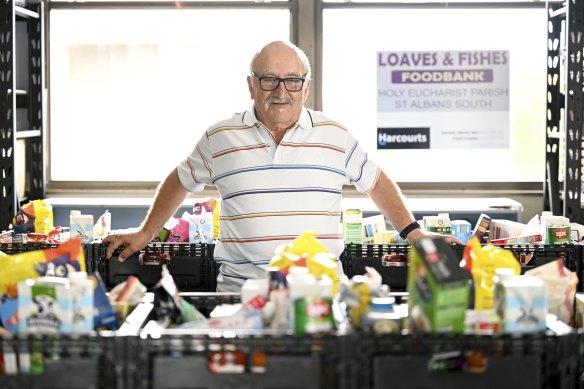 Carmelo “Charlie” Desira volunteers up to 30 hours a week delivering hampers and collecting, sorting and handing out food at the Loaves and Fishes food bank in St Albans.Credit:Penny Stephens

It was the perfect volunteer role for Desira, who in the early 1990s, while working in Melbourne’s CBD, would talk to homeless people and vowed to try and help them one day.

Desira, 78, a Maltese immigrant, has received the OAM in the Australia Day honours for service to the community.

Every Friday he and other volunteers give out hundreds of food parcels including vegetables, pasta and tinned food.

Some clients are homeless — sleeping in cars or outside. One client aged in his 30s who sleeps rough said he can’t afford the rent. Some people can’t pay electricity or gas bills.

Desira said at least giving them $100 of free food might mean they can heat their house. Sometimes he just listens to client’s problems. “You try to comfort them as much as you can.”

Desira said it gives him great satisfaction to help people.

“I think it’s a gift, doing this. I thank God that he gave me this opportunity to do it. I enjoy it.”

While many of us are having a well-earned rest this long weekend, Brian and Rae Heenan will be helping run a tennis competition. 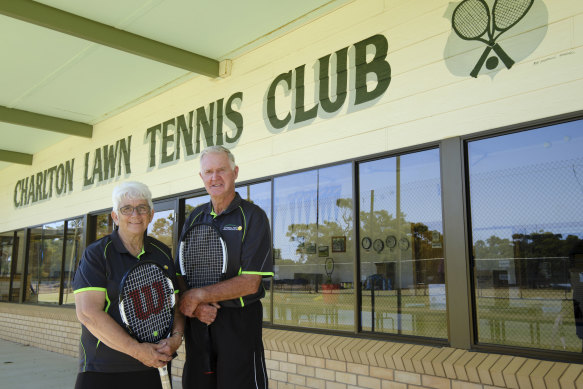 Forget the Australian Open; the Heenans will help organise the annual Australia Day tournament at the small northern Victorian town of Charlton.

Hundreds of people come from as far as Adelaide and Melbourne to play and watch.

Giving the event extra fizz this year is that the couple, who have helped organise it for 50 years, have each been given an OAM in the Australia Day honours list.

Brian, 78, and Rae, 72, have played, coached and organised at Charlton’s tennis and badminton clubs for 50 years.

Brian, a retired grain farmer, has also been the euphonium player in the Charlton brass band since 1956 when he was 12, and is now bandmaster. Rae, a retired shop assistant, was a Girl Guides leader for 20 years.

Buloke Shire Council mayor Alan Getley, who is from Charlton, is very pleased the pair are being honoured. “They’ve made an outstanding contribution to the community of Charlton,” Getley said.

In winter, Rae teaches badminton to Charlton children – some of whose parents she coached.

Brian and Rae, who have three children and nine grandchildren, still play tennis twice a week.

It’s Rae’s 44th year as the Australia Day tournament secretary, but she enjoys it. “They’re our tennis family” is how she refers to the annual visitors.

25/01/2023 World News Comments Off on They do it for love: meet the local heroes on the Australia Day honours list
Lifestyle