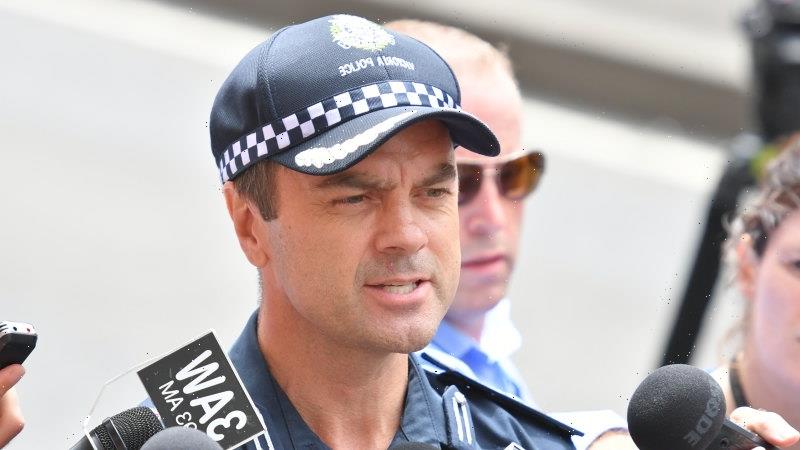 A decorated Victoria Police commander says he is not guilty of leaking information about a secret corruption probe into allegations police improperly influenced a sexual misconduct investigation.

Stuart Bateson, a key investigator in Melbourne’s gangland war and prominent senior officer who was depicted in the TV series Underbelly, is facing Melbourne Magistrates Court this week contesting charges he told a junior policewoman about a secret Independent Broad-based Anti-corruption Commission investigation. 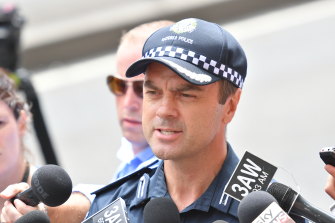 Stuart Bateson (pictured in 2017) has been suspended from Victoria Police after he was charged with leaking information about an IBAC investigation.Credit:Eddie Jim

His lawyer, Marcus Dempsey, said his client was not guilty of the three charges laid under section 44 of the IBAC Act.

Prosecutor Sarah Thomas told the court on Monday that IBAC started an investigation in March 2018 called Operation Horton, which was looking into allegations of improper influence in a Victoria Police Salus investigation. Salus was a police taskforce established to investigate sexual harassment, sexual assault and predatory behaviour in the force.

In 2018, IBAC called Commander Bateson to give evidence in a private examination, and he was served with a confidentiality notice to keep the commission’s probe a secret, the court heard. 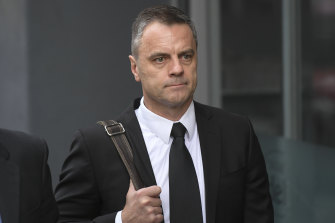 Commander Bateson, whose work in the gangland war led to his portrayal as a main character in the Underbelly series, was suspended from the force with pay after he was charged about two years ago with telling a junior officer about the IBAC investigation.

The junior officer, who reported Commander Bateson to authorities, told the court on Monday that he visited her at home and was “really fidgety” and that was “not usually like him”.

The policewoman, whose identity has been suppressed by the court, said Commander Bateson told her “he had been called in and asked questions” and was not “afforded the opportunity to not answer any questions or say no comment”.

“He said that I may be called in and spoken to,” she said.

“He said that I was to be honest and not to try and protect him.”

She alleged Commander Bateson told her that if he spoke about the investigation he would go to jail. While he denied it was an internal investigation run by professional standards command, she claimed that when she asked if it was IBAC, he had replied he couldn’t talk about it.

She had asked him if he had “thrown her under the bus” and accused him of talking in riddles. 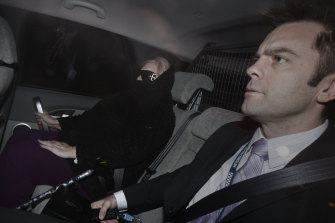 The officer when he was a detective senior sergeant in 2009, with the matriarch of the Moran crime family, Judy Moran.Credit:Justin McManus

She said Commander Bateson told her, “I haven’t spoken about the investigation, have I.”

“I said, ‘Thanks for the mic drop’ and he imitated a mic drop and then left,” the policewoman told the court.

The policewoman said she searched the internet afterwards and found an article about an investigation into high-ranking police, corruption and nepotism.

She said she saw Commander Bateson again after this encounter, and he showed her a news article on an iPad about the pertinent IBAC investigation. 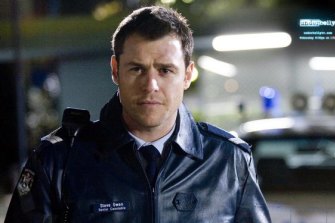 Actor Rodger Corser played a character based on Stuart Bateson in the Underbelly series.

The junior officer alleged Commander Bateson told her the name of the female police officer the investigation was related to, and he asked her if she had been called yet.

“He said he was disappointed in Victoria Police and that he was not afforded his own opportunity for privacy.”

In another conversation, the policewoman said Commander Bateson told her investigators thought they “had him” in relation to another female officer.

She said Commander Bateson told her he had never slept with the officer and he was asked to name all the people he had sex with in the past five years.

“I was shocked and surprised because that’s a very personal question,” she said.

The officer claimed she felt intimidated and pressured to maintain a friendship with Commander Bateson.

“I felt coached because he said, ‘If I were asked, I would say.’ Given the age difference and the significant rank difference, and this was clearly work-related, I felt quite pressured to oblige,” she said.

The officer told the court she reported Commander Bateson in November 2018.

Mr Dempsey told magistrate Simon Zebrowski that Commander Bateson would concede there were meetings and discussions, “but not they were accompanied by any criminality”.