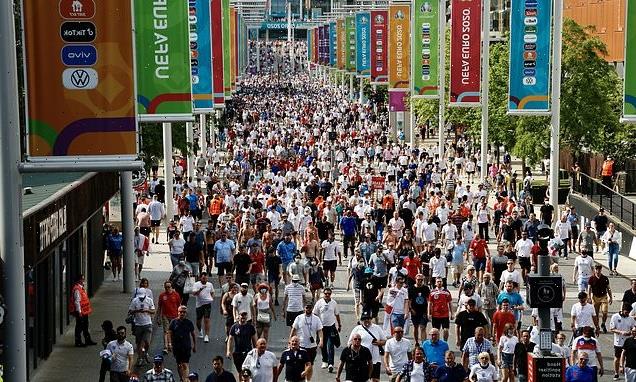 Foul! Touts are selling coveted £43 tickets for England-Scotland Euro clash for £2,000 EACH

Touts are selling tickets for England’s Euros match against Scotland for up to £2,000 – 46 times their face value.

Seats bought for the official price of £43 for ‘The Battle of Britain’ are being resold on high-profile websites at a mark-up of more than 4,000 per cent.

The touts are cashing in as fans clamour to be one of the 22,500 at Wembley tomorrow.

England have only clashed with Scotland in the final stages of an international tournament once, winning the group stage game 2-0 at Euro 96 at Wembley.

Tournament organisers Uefa yesterday warned that fans who used websites to buy tickets could be refused entry. But its own ticketing app is open to abuse as it allows people to resell seats. 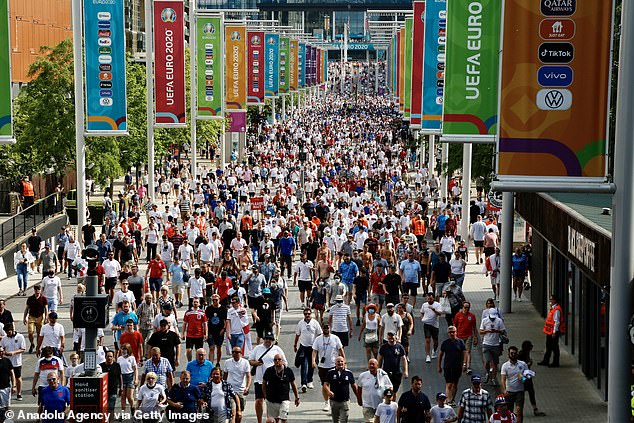 Touts are selling tickets for England’s Euros match against Scotland for up to £2,000. Pictured: England fans arriving at Wembley last week for the match against Croatia

Around 400 Welsh fans travelled to the Olympic Stadium in Baku, Azerbaijan, to see the 2-0 win.

They were outnumbered by more than 20,000 Turkish fans, including president Erdogan and locals supporting the nation it has close ties with. Wales now have four points with one group stage match left, making it next to impossible for them not to get to the round of 16.

It is the nation’s second time in the finals of the Euros, after they reached the 2016 semi-finals.

Fans who cannot go to a game are encouraged to transfer tickets to a ‘friend or family member’ via the app.

It only allows the holder to accept its face value but there is nothing to stop a vendor from adding an additional fee through a bank transfer.

Police warned supporters to avoid online touts and revealed there had been 1,085 reports of ticket fraud in the UK this year – with an average loss of £850 per victim.

The Mail found more than 30 seats for the next England game for sale on ticket resale site Ticombo.

The site claims it is ‘where organisers, resellers and fans can buy and sell tickets in a fair, easy and secure way’ but does not mention that Uefa bars resales except through its own platform.

Ticombo is run by Norwegian ‘super tout’ Atle Barlaup, who was also behind Euroteam, which collapsed after the 2012 Olympics leaving up to 15,000 customers without tickets.

The site owed more than £1million and was fined £150,000 by Norwegian financial authorities.

‘The listings don’t mention the chance of being refused entry or the actual face value of tickets. My advice would be to avoid this site.’ 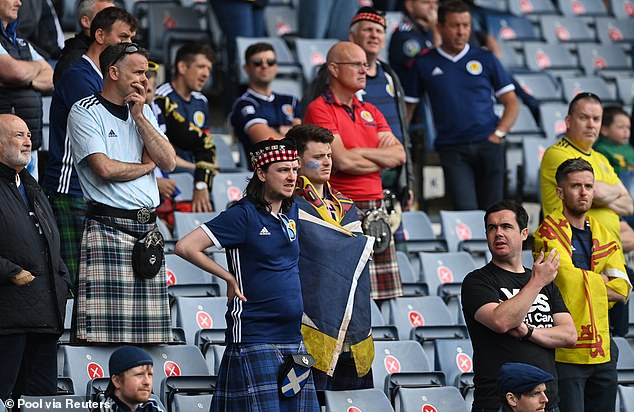 Tournament organisers Uefa yesterday warned that fans who used websites to buy tickets could be refused entry. Pictured: Fans at Scotland vs Czech Republic on June 14

A Uefa spokesman said: ‘Uefa encourages fans not to be duped by touts who demand exorbitant prices despite often not being in possession of the tickets they claim to have for sale.’

Ticombo and Live Football Tickets did not respond to requests for comment.

17/06/2021 World News Comments Off on Touts are selling tickets for England-Scotland Euro clash for £2,000
Lifestyle