Trade talks between U.S. and China end without a deal as Beijing refuses to back down on ‘issues of principle’ while Trump prepares to hike tariffs on $200billion of Chinese imports

Donald Trump said he would slap fresh tariffs on Chinese goods on Friday as trade talks between the Washington and Beijing ended without a deal.

However,  China and the United States have agreed to hold more trade talks in the near future, according to Vice Premier Liu He, who said he was optimistic on reaching an agreement, but said there were ‘issues of principle’ on which China would not back down.

Meanwhile, President Trump ordered his trade chief to begin the process of imposing tariffs on all remaining imports from China by hiking levies on $200billion worth of Chinese goods – an attempt to rescue a trade deal.

Trump issued orders for the tariff increase, saying China ‘broke the deal’ by reneging on earlier commitments made during months of negotiations.

‘Negotiations have not broken down,’ Liu, China’s chief negotiator in the talks, said, according to state television. 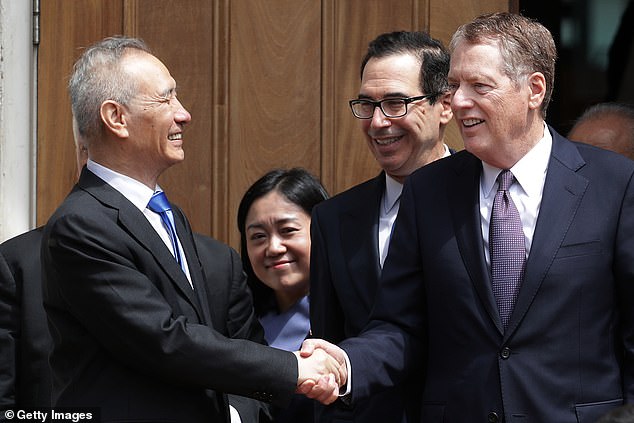 ‘Quite the opposite, I think small setbacks are normal and inevitable during the negotiations of both countries. Looking forward, we are still cautiously optimistic,’ Liu said.

China strongly opposes the latest U.S. tariff hike, and as a nation, has to respond to that, Liu told a small group of Chinese reporters in the video clip.

‘Right now, both sides have reached mutual understanding in many things, but frankly speaking, there are also differences. We think these differences are significant issues of principle,’ Liu said.

‘We absolutely cannot make concessions on such issues of principle.’

He added that talks would continue in Beijing, but gave no details.

But underscoring a lack of progress in the talks, Trump ordered a further escalation of tariffs.

Trump’s move would subject about $300billion worth of Chinese imports to punitive tariffs, U.S. Trade Representative Robert Lighthizer said in a statement.

Lighthizer said a final decision has not been made on the new duties, which would come on top of an early Friday tariff rate increase, to 25% from 10%, on $200billion worth of Chinese imports.

Three differences remain between the two countries, according to China’s account of the latest talks.

One of those is over tariffs, Liu said, according to a transcript of the Q&A published by Phoenix, a Hong Kong-based television station that is close to Beijing.

China believes that tariffs were the genesis of the trade dispute, and that if both sides wanted to reach an agreement, then all tariffs must be eliminated, Liu said.

The second is about procurement, on which an initial consensus was reached between the leaders of the two countries in Argentina late last year.

The two sides now have differing views on the volumes, Liu said.

The third is over how balanced the text of the draft agreement should be, he said.

‘Every nation has its dignity, so the text ought to be balanced,’ Liu said. 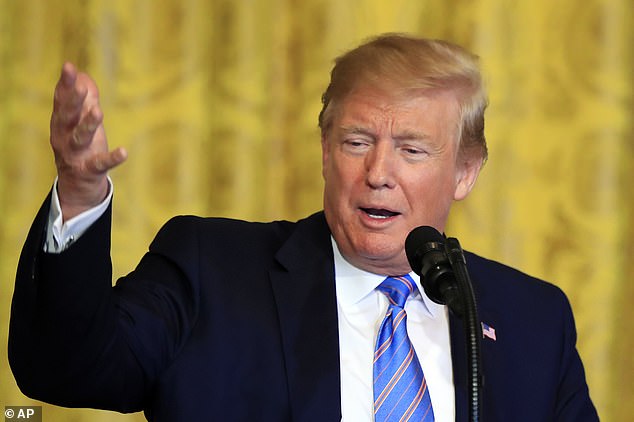 Sources told Reuters this week that China had deleted its commitments in the draft agreement that said it would change laws to resolve core complaints of the United States: theft of U.S. intellectual property and trade secrets; forced technology transfers; competition policy; access to financial services; and currency manipulation.

Liu denied the accusations of China’s reneging on promises, saying China thought it was normal to make changes before a final deal.

Both sides had differing views on how to phrase it, he said.

Liu said he hoped this issue would be resolved, so it was unnecessary to ‘over react’ to that point.

Similar to Liu, Chinese state media said China would not give in on its core interests.

‘China clearly requires that the trade procurement figures should be realistic; the text must be balanced and expressed in terms that are acceptable to the Chinese people and do not undermine the sovereignty and dignity of the country,’ the ruling Communist Party’s official People’s Daily said in a commentary on Saturday.

The trade war has weighed on the Chinese economy.

When asked about domestic concerns on how the latest tariffs could further pressure the economy, Liu said he was optimistic about China’s economy in the longer term, adding that it had entered an up-cycle after bottoming out somewhat last year.

He said he believed the Chinese economy would maintain a stable and healthy trend despite some downward pressure, and that China had ample room for fiscal and monetary policy maneuvers.

On Monday, hours after Trump said he intended to raise tariffs, the Chinese central bank cut the amount of reserves that some small and medium-sized banks need to hold, freeing up more funds for lending to cash-strapped firms.

11/05/2019 World News Comments Off on Trade talks between U.S. and China end without a deal
Lifestyle