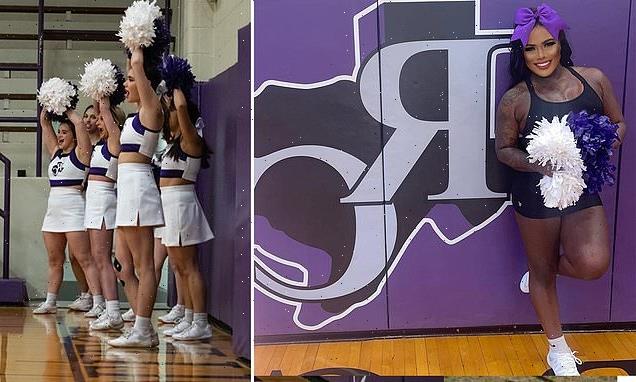 Trans cheerleader, 25, is given assault citation after ‘choking out’ teammate, 17, who called her a ‘man with a penis’ at cheer camp as video taken afterwards shows attacker saying ‘I barely touched her’

A transgender cheerleader was kicked out of a Texas college cheer camp after she allegedly attacked a teammate who called her a ‘man with a penis’.

Averie Chanel Medlock, 25, was booted from the Ranger College cheerleading camp in Texas, and given a criminal assault by physical contact citation last week. She is accused of choking a 17 year-old teammate, only identified by her first name, Karleigh, who she claimed made transphobic remarks toward her.

The girl and other teammates allegedly locked themselves in a locker room to hide from the raging Medlock, who claimed that she was being targeted for her race and gender.

Police were called to the scene, along with Karleigh’s father, Mike Jones, and Medlock was removed from the campus.

Medlock posted a video on her Facebook where she can be heard talking to teammates – albeit angrily – which she said proved she had not been physically violent during the argument.

Jones however has said the video is only a part of the truth and has called for security footage and body camera footage from the police response to be released.

During that clip, Averie can be heard to say: ‘If anyone has a problem, come address it to my face like an adult.’ She can be then heard adding that ‘I barely touched Karleigh’ and that she was ‘only joking.’

That appears to contradict a subsequent Facebook claim made by Medlock that no physical contact was made.

From the other side of the door, female voices could also be heard telling Medlock: ‘You’re a man,’ and ‘You have a penis.’

A friend of Medlock’s who was stood outside told the girls behind the door that they’d ‘crossed a line’, with Medlock ending the confrontation by saying: ‘There’s no beef between me and you, sorry to upset you.’ 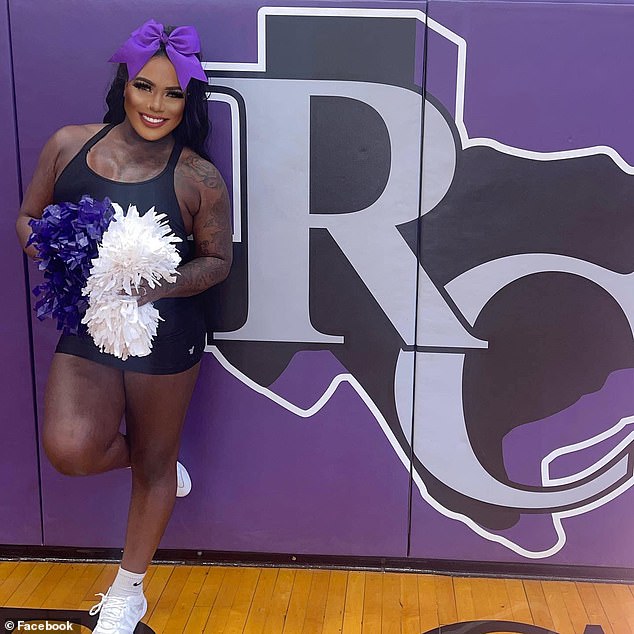 Averie Chanel Medlock, 25, was booted from the Ranger College cheerleading camp and given a criminal assault by physical contact citation last week 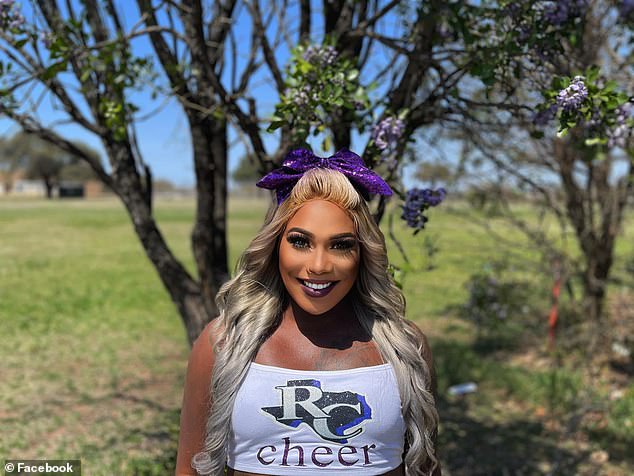 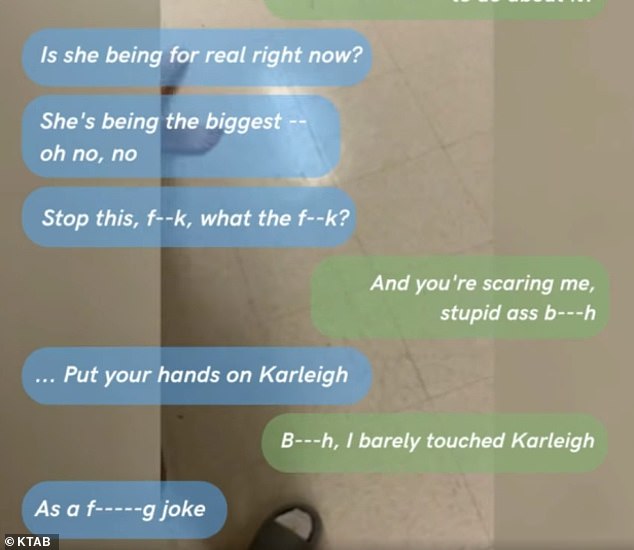 This is a subtitled grab from a video shot by Medlock after the choking incident, which saw her confront Karleigh and her friends from the other side of a door

‘Well guys I’m officially retired as a cheerleader as of last night at 5:30 AM,’ Medlock wrote in that Facebook post, which she shared last week, ‘A girl on the team was being very disrespectful and told me I am a MAN with a PENIS and that [guys] should not be on the team.’

‘I stood up for myself and she called her mom and dad because she was scared because I [stood] up for myself. Her father said ‘she still has testosterone and a penis and I will kill anyone who comes after my daughter.”

Jones’ account of the incident was far different, however, writing in a Facebook post that he was called by his terrified daughter at 1am after she barricaded herself behind a door to hide from Medlock, who had allegedly choked her out. Several teammates corroborated this account of events.

‘I ask you what you would have done when receiving a phone call at 1 o’clock in the morning from your daughter stating they had locked themselves in the room with other girls, after this person said You want to fight, and proceeded to put their hands around my daughters neck,’ he wrote. 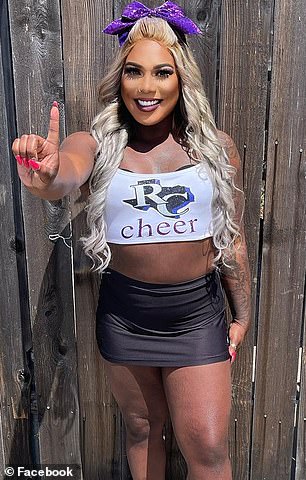 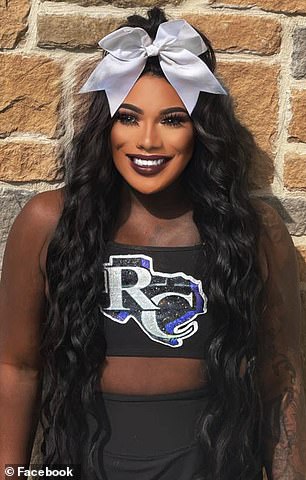 Medlock posted a video on her Facebook where she can be heard talking to teammates – albeit angrily – which she said proved she had not been physically violent during the argument. In the video she says anything she did to Karleigh was just a joke 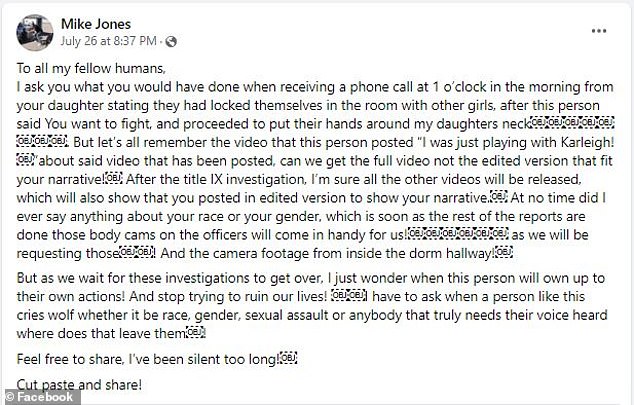 Mike Jones, the father of the girl who Medlock allegedly assaulted, asked that security footage from the hallway where the incident occurred be released

Speaking to KTAB and KRBC, Medlock insisted the problems were started by Jones and Karleigh, and that she was being targeted because of her gender.

‘I was kicked off the team for assumptions because of the dad’s assumptions of what happened.’

The outlet noted that throughout their conversation with Medlock she repeatedly claimed the citation she received was only for assault, yet a copy of the citation and a call to the Eastland County District Attorney’s Office revealed it was for unwanted touching.

In the video of the altercation Medlock posted – which consists mostly of audio – the cheerleader can be heard telling off teammates behind a closed door for their transphobic comments.

She can also be heard telling the teammates that she ‘barely touched’ Karleigh and insisting any contact was merely a joke.

‘B***h come outside then,’ Medlock tells one of them women locked in the room.

‘You’re a man,’ the woman responds. When Medlock responds that she is a girl, the woman in the room says ‘You have a penis.’ 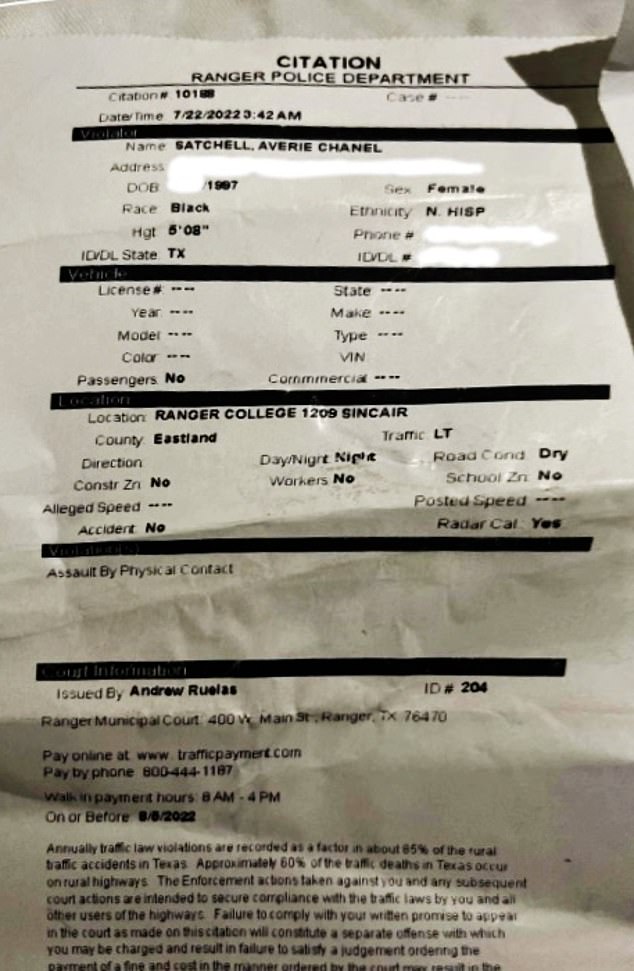 The assault citation issued to Medlock on the night of the incident. It cited her for ‘Assault by physical contact’ 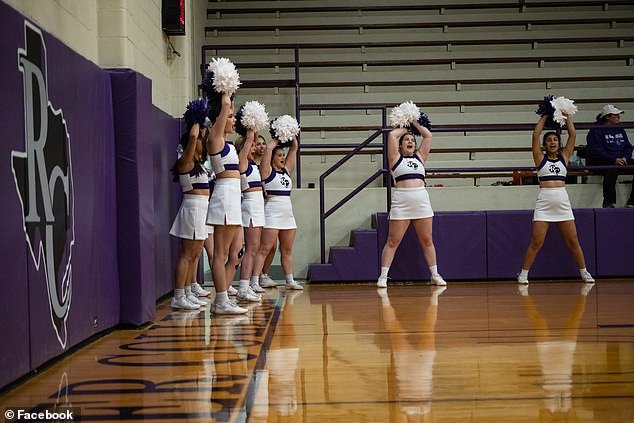 In a statement, Ranger College said the school was opening a Title IX investigation into the incident

In a statement, Ranger College said the school was opening a Title IX investigation into the incident.

‘Ranger College takes all allegations of this nature seriously and is committed to providing a learning environment free from discrimination. At this time, Ranger College is following all applicable Title IX regulations and Board Policies,’ the school said.

News of the debacle comes as the place of transgender people in sports has been hotly debated across the country after UPenn swimmer Lia Thomas smashed swimming records to win the NCAA Division 1 women’s national championship.

Thomas was born as a male and competed on the UPenn mens’ swim team from 2017 to 2020, but transitioned and began competing – and racking up medals – with the womens’ team in 2021.