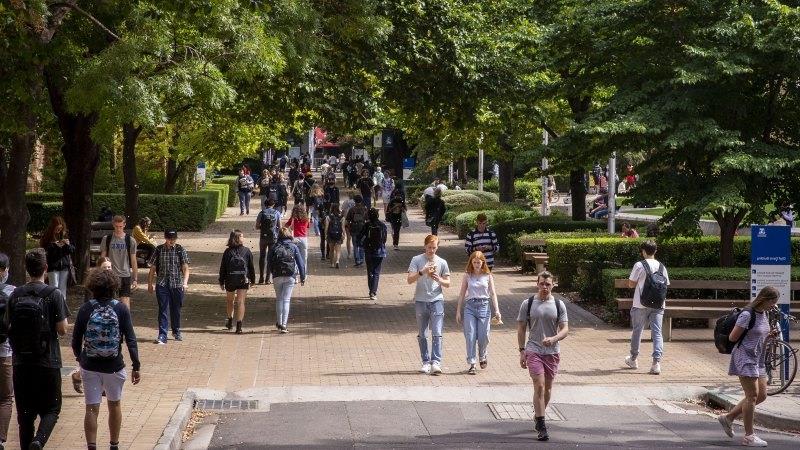 It was the first week back on campus for students at Melbourne University in 2021, and a hateful slogan had just been scrawled on a window of the arts building. 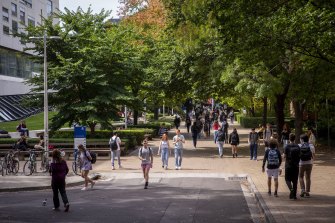 Students walk around the University of Melbourne.Credit:Wayne Taylor

(TERF stands for trans-exclusionary radical feminist, a term coined for feminists who reject the argument that transgender and gender-diverse people are women.)

Amelia Bright, an office bearer in the student union’s queer political action collective, is in no doubt about what had inspired the transphobic graffiti.

Days earlier, University of Melbourne associate professor in political philosophy Holly Lawford-Smith had launched a website, No Conflict, They Said, calling for women assigned female at birth to anonymously share stories of times they had felt threatened by transgender women. 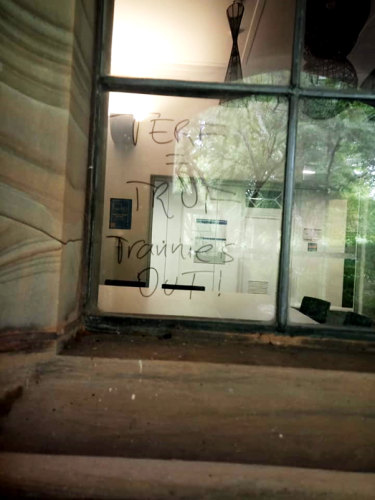 Transphobic graffiti scrawled on a window at Melbourne University in February.

“When you have this kind of rhetoric that is in most cases blatantly false … the narrative that transgender women are inherently predatory, it incites violence against trans people,” Ms Bright said.

It was not the first time transphobic rhetoric had been put up around campus. In 2019, posters were stuck inside women’s toilets referencing overseas cases of transgender people convicted of sexual abuse, one of which blared in all-caps, “Coming soon to a toilet with you”.

Dr Lawford-Smith said the graffiti and posters were transphobic, but should not silence discussion.

The debate on transgender identity has become a running source of conflict at Melbourne University, and a stress test for its stance on academic freedom. 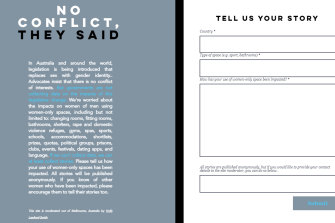 So much so that Vice-Chancellor Duncan Maskell acknowledged the “deep disagreements and widely divergent views amongst our community about questions concerning gender identity” in an all-staff address on Tuesday night.

Professor Maskell said that all sides should be respected in the debate, but added a note of caution that “emotional distress and anguish caused to transgender people by inappropriate words being spoken and written is very real, and it is the responsibility of all of us not to add to this burden”.

The university is also close to finalising its gender affirmation policy which, if adopted in its current draft form, would enable it to veto public events and discourse it views as potentially harmful to transgender and gender-diverse staff and students.

Andrew Norton, a professor in the practice of higher education policy at ANU, said it was unlikely the gender affirmation policy would limit academic freedom.

But he said the section that would enable the university to veto events it judged potentially harmful to transgender and gender-diverse people was problematically vague in its language and “combined with a high level of administrative discretion”.

“Because it allows the decision-maker to define harm in a broad way, the federal government may deem it non-compliant with its model code on the protection of freedom of speech and academic freedom,” Professor Norton said.

“The code requires a high level of harm – likely to humiliate or intimidate. Simply being offended or insulted is not enough.”

The model code has been backed by the Morrison government but has limited legal authority. A review of universities’ alignment with the code last year, by former Deakin University vice-chancellor Sally Walker, placed Melbourne University among 14 universities that were “mostly aligned, with some areas not aligned”.

Federal Education Minister Alan Tudge declined to comment for this story, but tweeted about the issue of free speech after The Age reported on Melbourne University’s draft gender affirmation policy.

Dr Lawford-Smith, who describes herself as “gender-critical”, said the graffiti and posters were no reason “to silence discussion in good faith”.

“I’m not going to stop talking because of one time when a student who is completely unreasonable does graffiti that hurts someone’s feelings,” she said.

There is no question her work has become a lightning rod for disputes on the issue. On March 31, students held a rally on campus to condemn her website.

Cheryl Hercus, a retired academic, feminist author and one-time federal Greens candidate, attended as part of a small group of women in support of Dr Lawford-Smith.

A small number of students at the rally became verbally abusive towards them. One splashed Ms Hercus with water.

The former sociology lecturer at James Cook University said their behaviour demonstrated that many students these days could not accept a divergence of views on an issue such as transgender identity.

“There is so much vitriol directed specifically to women who question,” she said.

The University of Melbourne’s draft gender affirmation policy showed the institution had been captured by a growing intolerance for debate, she argued.

“They are pandering to a group of students who don’t want to discuss the issues, they want to shut down the debate.”

Ms Bright says Melbourne University’s free speech policy is clear and will not be weakened by the adoption of a policy on gender affirmation intended to protect gender-diverse people from being vilified.

“The university does not support the exercise of freedom of speech when it undermines the capacity of individuals to participate fully in the university, or prejudices the fulfillment by the university of its duty to foster the wellbeing and safety of staff and students,” she said, quoting its free speech policy.