Train, tram and bus use on the weekend has doubled in inner Melbourne during stage four lockdown, as more people get out in improving weather.

But all forms of public transport use remains drastically low, diving to nine per cent on normal levels. 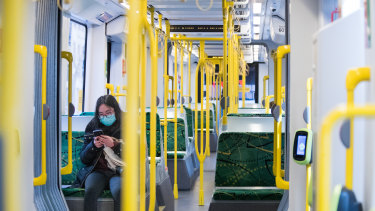 A lone commuter under stage four restrictions, at the start of August. Credit:Jason South

It comes as new research finds that people over the age of 45 are avoiding public transport more than young commuters, most likely due to infection fears.

Those who are required to travel for work say they have less work now than they did before the pandemic and fear losing more work, the Sydney University research found.

Good weather lured more Victorians outside on the weekend of August 29 and 30, with road volumes rising 12 per cent, public transport use increasing 20 per cent and city foot traffic jumping 55 per cent.

On August 29, tram journeys crept up across a host of inner local government areas — by about 50 per cent in Glen Eira and Port Phillip to more than 1000 and 4000 trips, respectively.

Tram use rose nearly 90 per cent to around 2000 trips in Moreland.

Train trips increased in south-eastern areas of Frankston (45 per cent), Bayside (48 per cent) and Kingston (49 per cent) on the last Saturday of last month, but also dropped by nearly 90 per cent in Maroondah and the Yarra Ranges.

Weekday movement from August 24 to 28 was relatively stable compared with the previous week.

Public Transport Minister Ben Carroll said slight increases in movement were due to people getting outside for exercise as the weather warmed up.

He said 95 extra weekly train services were added and two new tram shuttle routes added in the CBD to make it easier for commuters to socially distance.

"As the curfew is extended and exercise and recreation time is increased to two hours per day, we expect to see this figure rise again – but consistently low levels of public transport and road patronage show that most Victorians are following the Chief Health Officer's directions," Mr Carroll said.

Victorians plan to favour their cars over public transport after the pandemic subsides, Sydney University research has also found.

But the number of people expecting to walk has doubled pre-pandemic levels to 13 per cent.

People from different age groups are moving around differently under lockdown, the data gathered in late August and early September showed.

Those aged 45 and above were more likely to use their cars.

By comparison, those aged 18 to 24 said they used the train once a week.

"Older people know their exposure to risk is higher and are more likely to use their car if they're going to travel," director of the Institute of Transport and Logistics Studies at Sydney University David Hensher said.

Those who could not work from home said they had less work now than pre-COVID-19 and feared losing more work.

"If your work can't be done within the home and you're not willing to travel to work due to infection risk, then the amount of work you can do is likely to dissipate,” Professor Hensher said.

He said new working-from-home practices called for a shift away from major infrastructure spending to smaller, local upgrades that would assist cyclists, pedestrians and smaller bus trips.

"Sixty to 70 investments each of $5 million or more would be more beneficial in terms of local activity than one project that has implications for a single location rather than the suburbs."

Peter Hewitt, who is 74, said he mostly drives his car to get around within a five-kilometre radius. But he hasn’t been permanently put off by public transport.

"I can imagine using the train again when the threat of the pandemic is over,” he said. “You just use your common sense … have a mask on hand, use hand sanitiser and keep distanced."

Get our Coronavirus Update newsletter for the day’s crucial developments and the numbers you need to know. Sign up to The Sydney Morning Herald’s newsletter here and The Age’s here.