Three people listening to music and drinking on an inflatable boat at a lake in Melbourne's west were among dozens fined on Sunday for breaching the state's coronavirus restrictions.

The trio were caught floating at Caroline Springs Lake, and each issued fines of $1652. 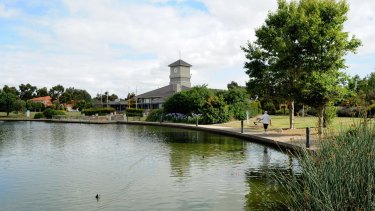 They were among 177 people fined by Victoria Police in the past 24 hours.

This included 11 infringements issued to people failing to wear a face covering for one of the four approved reasons, 28 at vehicle checkpoints and 68 for curfew breaches.

A man who was walking in the Whitehorse local government area after curfew was fined after he told police he knew he was breaching restrictions but didn't want to pay the surcharge for Uber Eats delivery.

Other examples of fines issued included a man who was stopped at the Little River checkpoint after curfew, who told officers he was on his way to "pick up a mate so they could go back to his house and drink", police said.

A man at Lilydale Railway Station, in the city's north-east, who was more than 40 kilometres from home told police he wanted to go for a day trip because he thought the restrictions had been lifted. 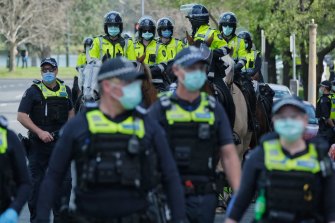 A total of 13,091 vehicles were checked at the vehicle checkpoints on Sunday and 3054 spot checks were carried out on people at homes, businesses and public places across the state.

Since Victoria's second lockdown began at midnight on July 8, Victoria Police has issued more than 9200 fines, equal to more than $15 million.

About 6700 of these fines have been issued since stage four restrictions came into place on August 2.

At an anti-lockdown rally in Melbourne's CBD on Saturday, police issued more than 180 fines to protesters and arrested 17 people during the demonstration.

Fifteen of the arrests were for failing to provide identification while in breach of the Chief Health Officer’s stay-at-home directions.

Seven people who were arrested were issued with a fine from police after providing their name and address.