Washington: The Trump administration is planning to move ahead with a significant reduction of US forces in Afghanistan before President Donald Trump leaves office in January, despite months of Pentagon warnings that doing so could jeopardise prospects for lasting peace.

According to officials familiar with the discussions, the White House is preparing to announce as soon as this week plans to roughly halve the number of US troops, from around 5000 to 2500, by the time President-elect Joe Biden assumes office on January 20. 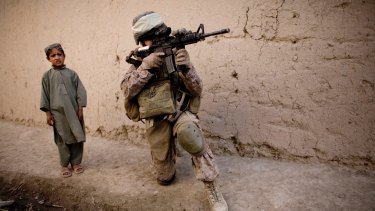 President Donald Trump has recently called for the further reduction of US troops in Afghanistan.Credit:AP

The decision to take a major step toward fulfilling Trump's long-delayed promise to bring home troops from America's longest war could bring to a head tensions that have been intensifying during a chaotic transition period that has plunged the Pentagon into uncertainty.

Officials cautioned that the plans from the White House, where foreign policy zigzags have been a common occurrence, could change. The planned cut was first reported by CNN.

The discussions come as violence surges in Afghanistan and the president continues to falsely assert victory in the November 3 election. Trump, who fired his defence secretary and elevated loyalists at the Pentagon last week, has also blocked agencies from working with Biden's transition team.

Days before being dismissed, former Pentagon chief Mark Esper sent Trump a classified memo that cautioned that conditions were not adequate to make additional troop cuts in Afghanistan, citing the possibility of undermining peace talks and a variety of other factors. His assessment was based on input from senior military leaders.

A deal struck between US and Taliban negotiators in February calls for the United States to withdraw all troops by May 2021 if the Taliban meets certain conditions, including making a break with al-Qaeda.

In practice, military officials have hoped they could. But each side has accused the other of violations, and military leaders have said for months that decisions about steps to meet that withdrawal objective would be based on the situation on the ground.