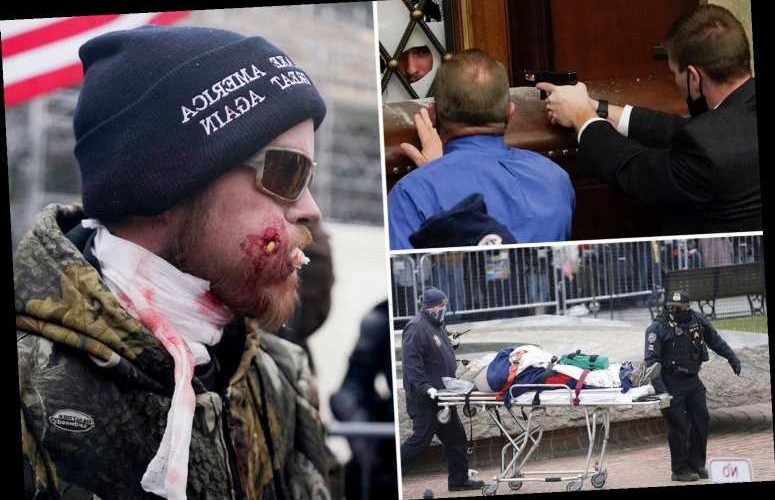 A TRUMP fan was spotted with a "hole in his face" and another was taken away on a stretcher as a MAGA rally stormed the Capitol on Wednesday.

The shocking photo comes as hundreds of Trump fans stormed inside the US Capitol building on Wednesday afternoon. 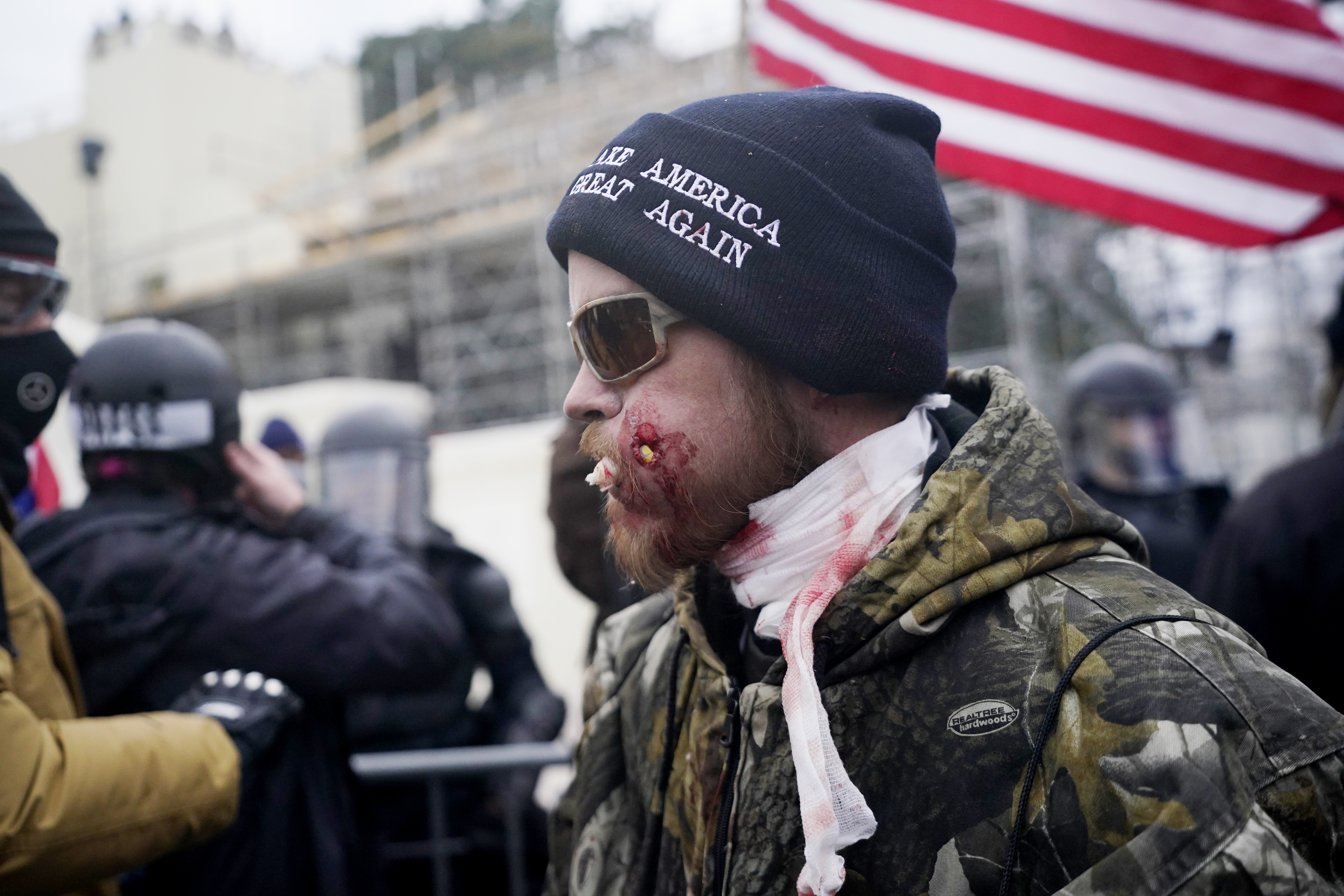 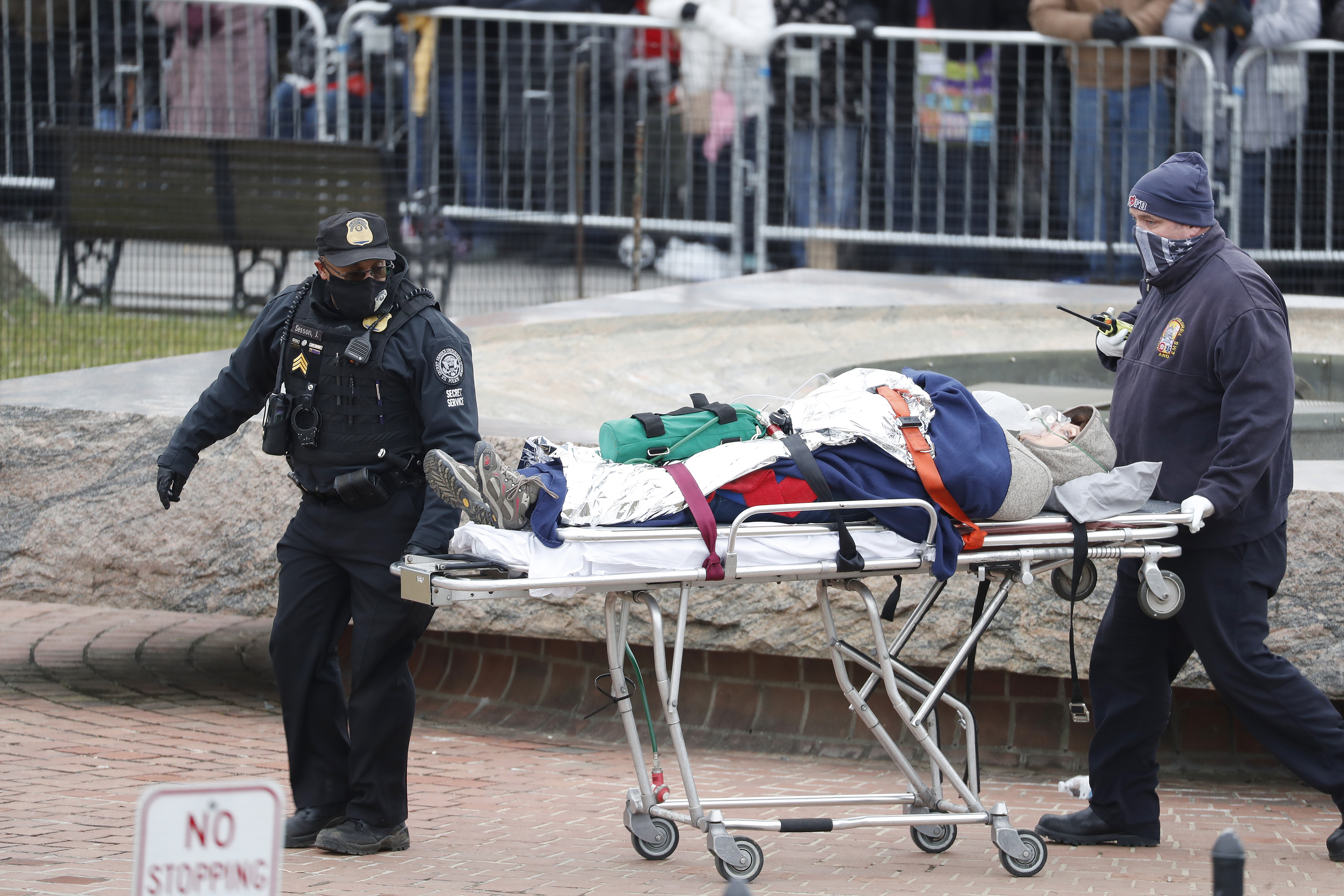 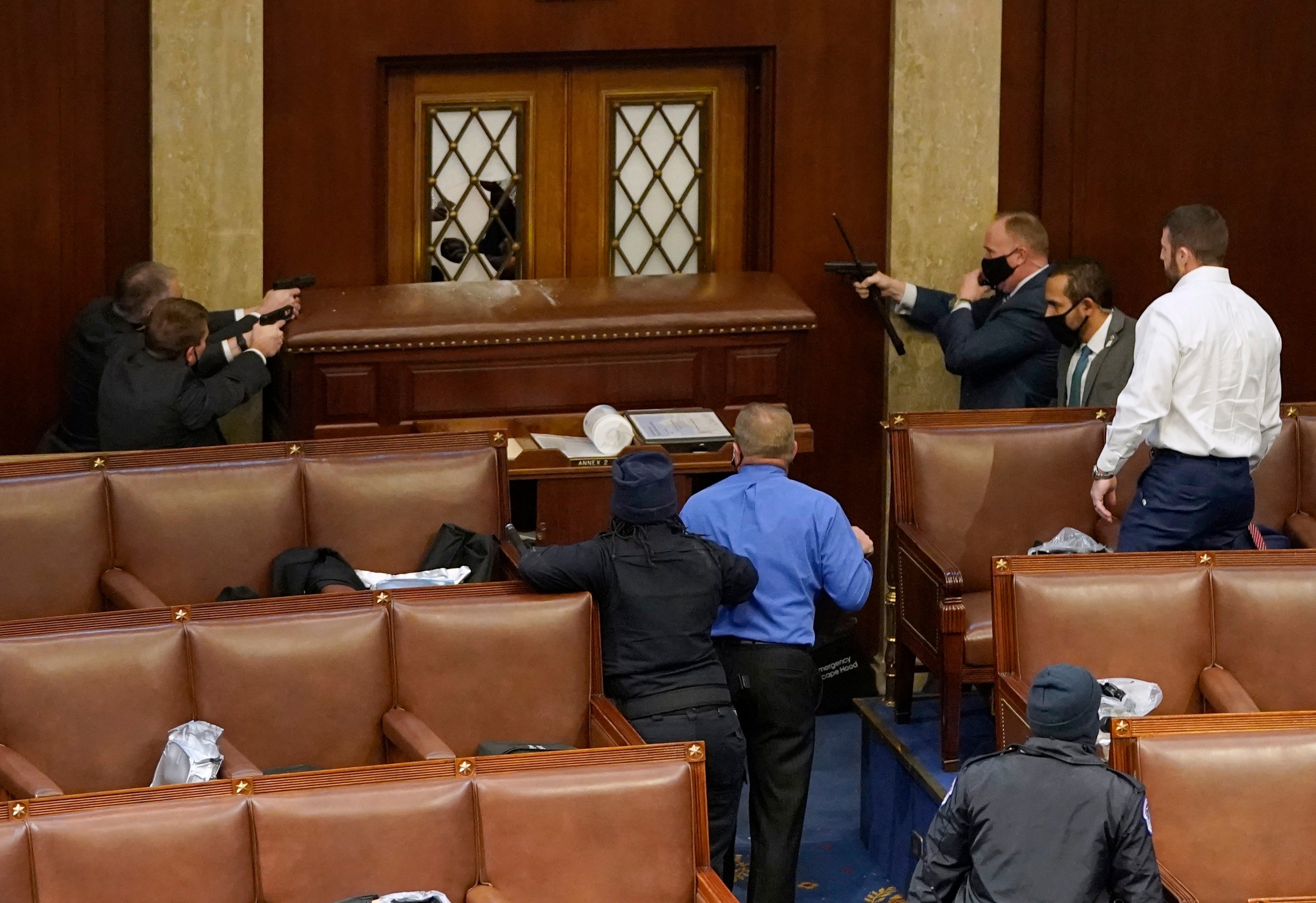 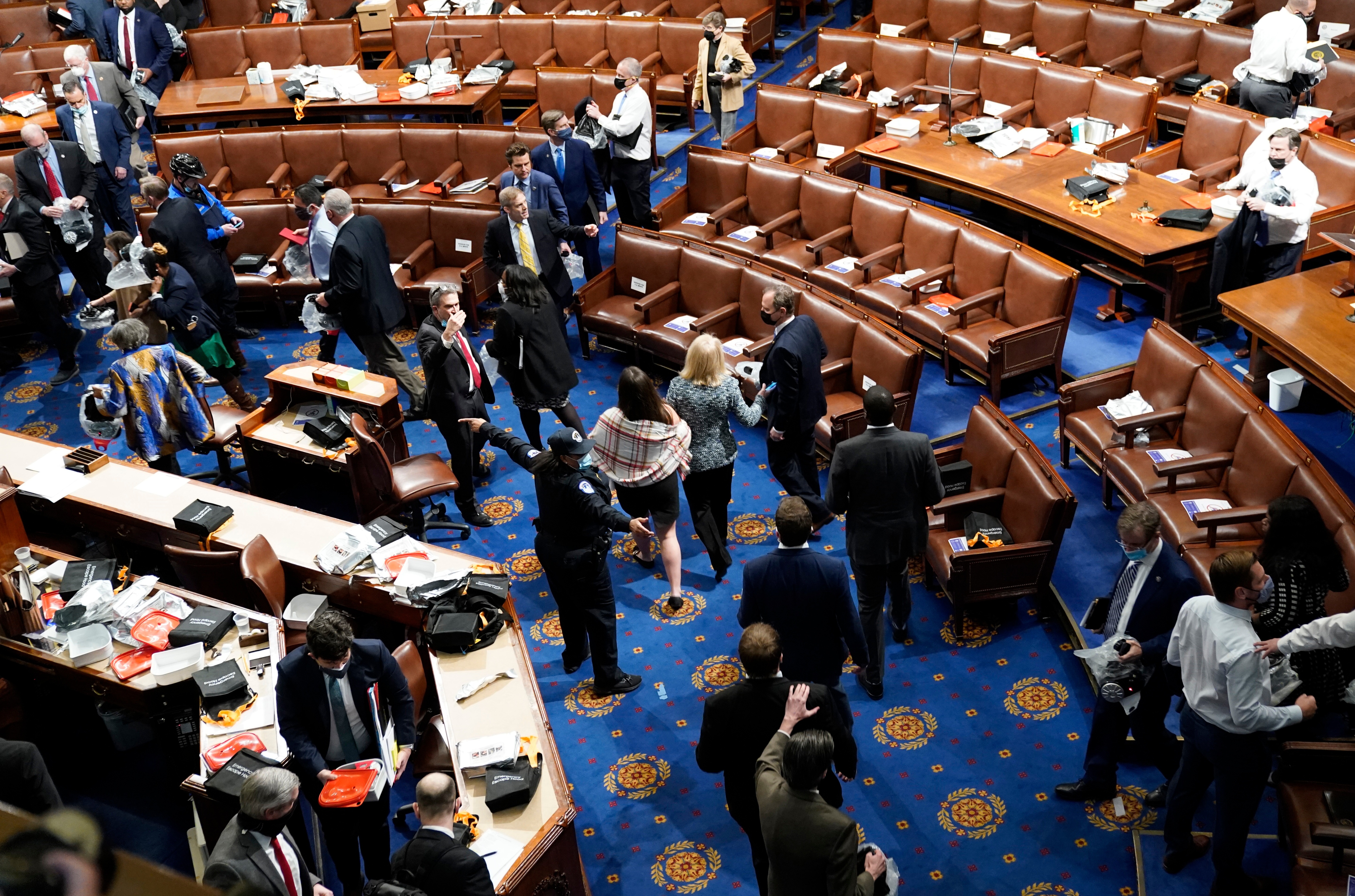 In the gruesome photo, a bearded man wearing a Make America Great Again beanie hat is seen with what appears to be a bloodied gauze bandage around his neck and some type of hole in his cheek.

The wounded man, also donning a Realtree camouflage jacket and sunglasses, seemed to have something small inside it – which appeared to be gauze.

Another person was photographed on a stretcher with an oxygen mask on their face.

Capitol police officers were photographed pointing their guns at a wrecked door in the House Chamber.

And members of Congress were seen evacuating the House floor as protesters tried to make their way in. 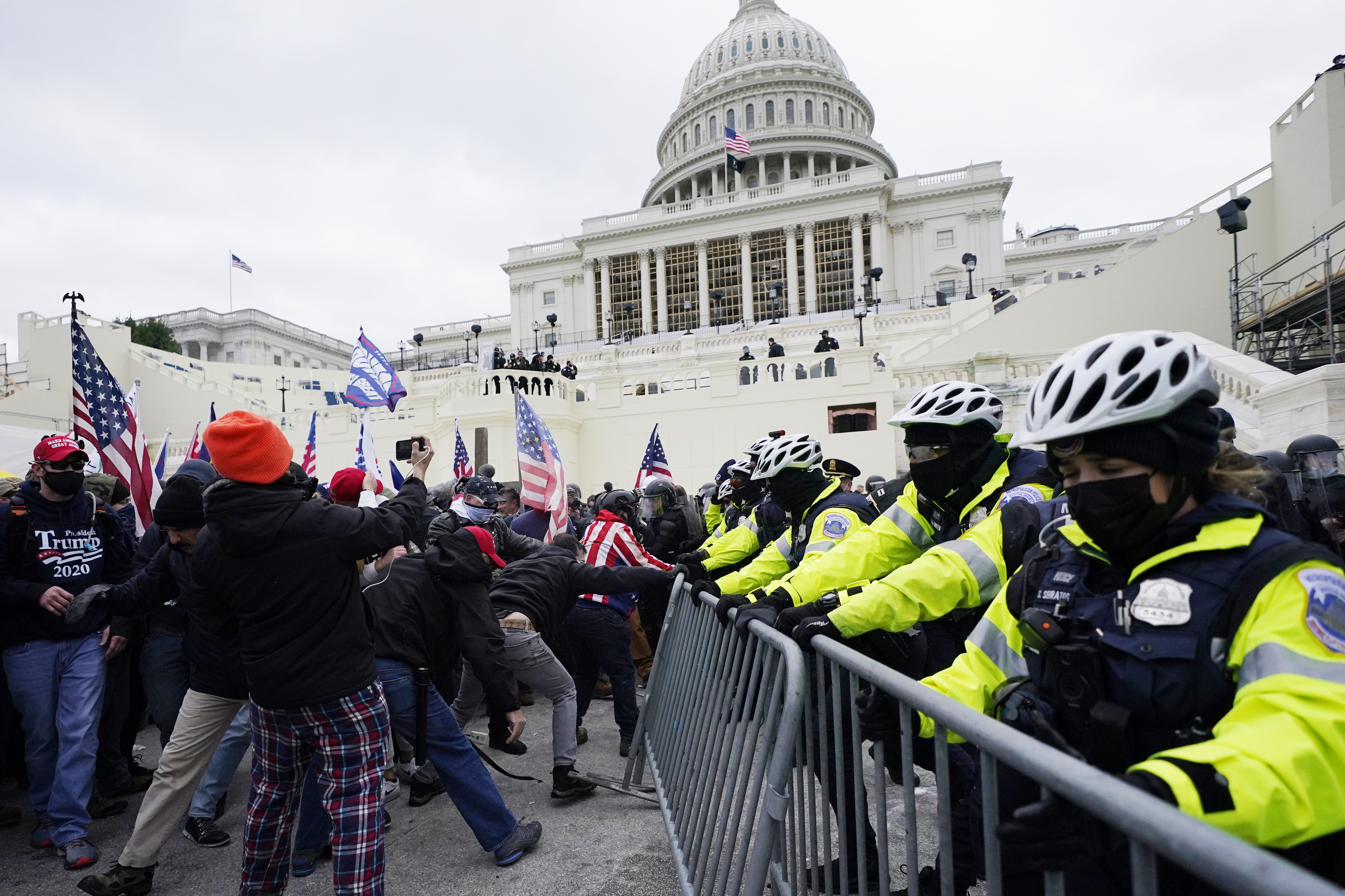 Vice President Mike Pence was evacuated from the Capitol, as the building was put on lockdown, sources told Bloomberg.

The chaos came as members of Congress were meeting to vote and certify the election results.

Senators started evacuating the building when police officers revealed tear gas had been deployed in the rotunda, according to reports.

One video shared on social media showed cops using batons as they clashed with demonstrators. 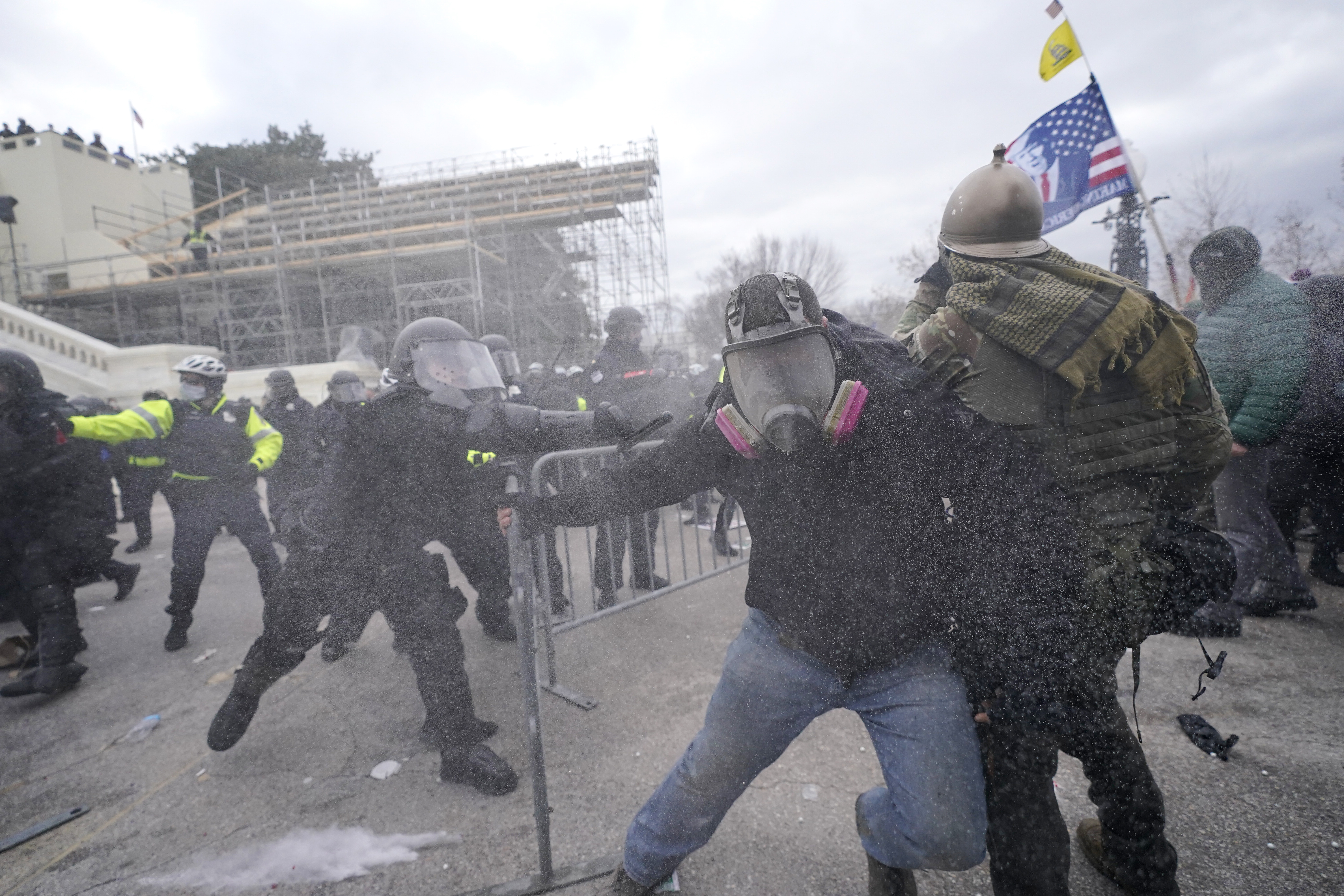 Video showed protesters running across the grass and toward the building in an attempt to occupy it after the fence was broken as some tried to occupy the building.

Photos also showed demonstrators inside the Capitol, as they were outside the Senate Chamber.

Demonstrators were seen arguing with cops as Senators were locked inside.

As protesters breached the inside of the Capitol, DC Mayor Muriel Bowser announced a 6pm curfew.

A statement from the mayor's office read: "Today, Mayor Muriel Bowser ordered a citywide curfew for the District of Columbia from 6 pm on Wednesday, January 6, until 6 am on Thursday, January 7.

"During the hours of the curfew, no person, other than persons designated by the Mayor, shall walk, bike, run, loiter, stand, or motor by car or other mode of transport upon any street, alley, park, or other public place within the District."

However, the curfew does not apply to essential workers or members of the media with outlet-issued credentials.

The National City Christian Church in Thomas Circle rolled out the banner earlier today as MAGA supporters gathered in the capital for a Save America March to protest at what they see as a rigged election.