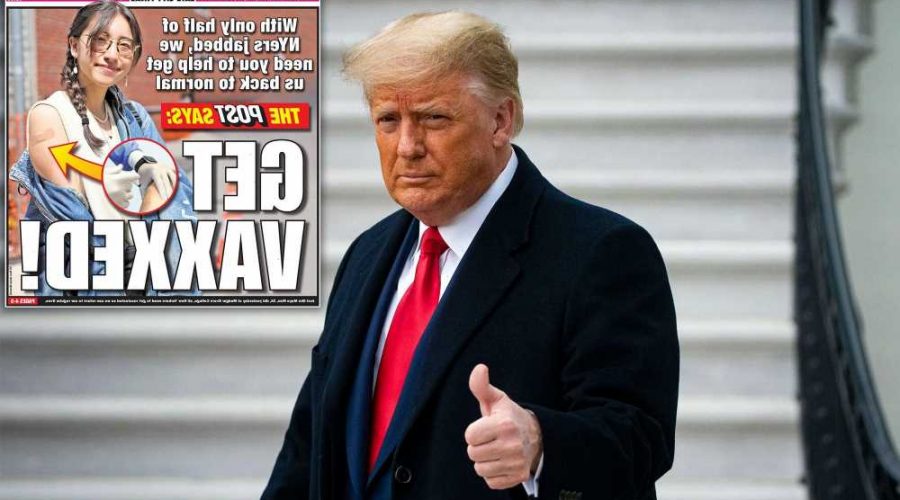 The Post’s push to get New Yorkers to roll up their sleeves and get vaccinated against the coronavirus is drawing a big thumbs-up from Donald Trump. The former president is on board with the campaign to get more people immunized so the city can get up and running at full speed.

“I’m all in favor of the vaccine,” Trump said Thursday. “It’s one of the great achievements, a true miracle, and not only for the United States. We’re saving tens of millions of lives throughout the world. We’re saving entire countries.”

Speaking by telephone to Post columnist Michael Goodwin, Trump said he got his first shot before leaving the White House in January, and his second in Florida, where he now lives. Former First Lady Melania Trump also has been vaccinated, and neither had any adverse reactions.

“Not even a bit of arm soreness,” he said. “It’s pretty amazing stuff.”

Trump remains understandably proud of Operation Warp Speed, the program he commanded that dramatically reduced the time for vaccine research, development and human trials. No previous vaccine had come to market in fewer than five years, while this one went from start to finish in about nine months. The first doses were shipped to the states in the middle of December.

Trump and his successor, Joe Biden, don’t agree on much else, but both believe this vaccine saves lives.

“If we didn’t have a vaccine, it would have been just like the 1918 Spanish flu,” Trump said of the pandemic that took as many 100 million lives around the world.

Globally, some 141 million people have contracted COVID-19, with more than 3 million deaths.

Nearly 570,000 of the fatalities have been in the United States.

“The vaccine is a great thing and people should take advantage of it” Trump said, before quickly adding that “nobody should be forced, we have our freedoms. But I strongly recommend it because it’s a real lifesaver.”