Washington: US President Donald Trump, who won the presidency in part on his image as a successful business mogul, lost $US1.7 billion ($2.4 billion) over 10 years on failed business deals, according to tax records obtained by The New York Times. 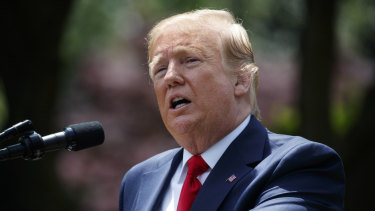 The losses, in the 1980s and 1990s, were greater than those reported by nearly any other American taxpayer during that period, according to Internal Revenue Service data The Times said it had reviewed.

In 1990 and 1991, according to The Times report, Trump's loses of $US250 million a year were more than double those of the nearest taxpayer the IRS collected information on.

Democrats in Congress have been battling for the release of the president's more recent returns, a clash that may likely end in court. Trump sold himself to voters as a master deal maker, who could bring the same success to the country as he did to his businesses.

The Times said it did not obtain the actual tax returns, but instead received Trump's IRS tax transcripts that included figures from his federal 1040 tax form from someone who had legal access to it. The Times said it was able to verify some of the figures by cross referencing them to other documents they had obtained.

The losses cover Trump's taxes from 1985 to 1994. The losses began with $US46.1 million in 1985 from casinos, hotels and retail space, and grew year after year, The Times reported.

The returns also show how Trump's primary sources of income changed each year from stock market earnings — in part from boosting stock prices by suggesting he would take over a company — to an unexplained $US52.9 million gain in interest income.

Yet the income was offset each year by losses, which were so great that Trump would have been able to avoid paying income taxes for eight of the 10 years.

On Monday, US Treasury Secretary Steven Mnuchin refused to release Trump’s personal and business tax returns from the past six years, setting up what could become one of the biggest legal showdowns between the president and a Congress seeking to investigate him.

Democrats, citing a section of the tax code from 1924, say the law is on their side. The law allows the chairmen of the House Ways and Means and Senate Finance committees and the Joint Committee on Taxation to request the tax returns of any taxpayer and that the Treasury secretary "shall" provide them.

The Times has previously reported on parts of Trump's tax returns from his 1995 filings after receiving some of the pages in the mail. They showed that Trump had reported a loss of $US915.7 million.

Trump's financial troubles over the period examined by the Times have been well documented with his companies having sought bankruptcy protection in 1991, 1992, 2004 and 2009