All of the following statements are true. 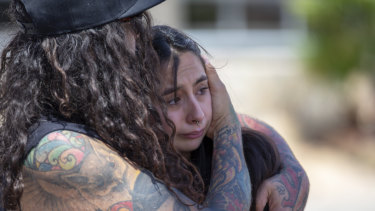 A couple embrace at the makeshift memorial for the victims of Saturday mass shooting at a shopping complex in El Paso, Texas. Credit:AP

President Donald Trump condemns racist language and actions when pressed to do so, but often backtracks from that condemnation. He has echoed white supremacist rhetoric in the past and made racist comments.

Trump frequently attacks immigrants to the United States from Mexico, Central America or predominantly Muslim countries in terms that suggest they are dangerous criminals or undeserving of being here.

Trump supports the ability of civilians to buy weapons such as the AR-15 that are largely similar to the rifles carried by American combat troops.

There is no reason these three things should necessarily blend together into a scenario where someone echoing Trump's rhetoric commits an act of violence targeting an immigrant community. But it's not hard to see how they could.

The motive of Saturday's mass shooting in El Paso, Texas which left 20 people dead has not yet been confirmed by law enforcement. There is reason to believe, however, that before opening fire the shooting suspect published a short screed disparaging immigrants to the United States and warning of an "invasion" of Hispanics. That term is one that Trump himself has used to describe migrants seeking entry to the United States from Mexico.

Trump has repeatedly hinted at meeting migrants with violence. In May, someone at one of Trump's rallies in Florida replied to his rhetorical question about how the arrival of migrants could be stopped by saying they should be shot. Trump made light of the comment: "That's only in the Panhandle you can get away with that statement."

It's probably only at a political rally for Trump that you could, too.

Trump holds the three positions articulated above at least in part because he thinks they're politically popular. He's not going to chastise someone for suggesting that migrants should be shot because being "tough" on immigration is his brand. He supported a ban on assault weapons as recently as 2000, but embraced hard-right rhetoric on guns during his 2016 campaign.

He has criticised mass shootings aimed at instilling terror in a particular community in the past – when the perpetrators were Muslim.

Shortly after the 2015 shooting in San Bernardino, California, in which 14 people were killed, Trump explicitly referred to the act as one of terrorism. He tweeted:

"The horrible shooting that took place in San Bernardino was an absolute act of terror that many people knew about. Why didn't they report?"

For months after, he insisted that people in the shooters' community knew they were planning an attack, a claim that's never been confirmed. Shortly after the shooting, he proposed a sweeping solution: Ban all Muslims from entering the country. After two Muslims, one an immigrant, killed 14 people to advance their political philosophy, all Muslims were considered by Trump too dangerous to be here.

After 20 people were killed in El Paso by someone who may have been motivated by hatred of immigrants from Mexico, Trump tweeted that the shooting was "not only tragic, it was an act of cowardice."

"There are no reasons or excuses that will ever justify killing innocent people," he wrote at about 8 p.m., later deleting the tweet and sending it out again a few hours later.

In that same hour as his initial tweet, someone posted a photo of Trump on Instagram, showing the president crashing an event hosted at his golf club in Bedminster, New Jersey, to cheers.

Trump has in the past played down the threat of white supremacist ideology. In March, he waved it off, saying that he see didn't see white nationalism as a rising threat. Late last month, FBI Director Christopher Wray said that domestic terrorism arrests made by the bureau had risen to nearly the number as arrests linked to international terrorism, and that most of the domestic arrests linked to a racial motive were white supremacists.

Trump's standard response to mass shootings that aren't committed by a Muslim is to suggest mental illness was a factor. Despite that, his annual budgets have proposed cuts to mental health programs. Cutting government is much more popular with the most vocal parts of his base than worrying about mass shootings.

Trump, like other opponents of new restrictions on firearm ownership, tends to respond to mass shootings by insisting the events shouldn't be politicised, deferring discussions of political responses until passions fade. He responds to incidents of racism by either ignoring them or issuing brief statements – while hyping even minor international terrorism incidents or crimes by immigrants.

There will be a robust debate over the coming days about the role Trump played in the shooting in El Paso and the way his rhetoric reflects and bolsters the rhetoric of overtly racist groups and individuals. At a minimum, though, Trump's willingness to coexist with racists, his belief that attacking nonwhites and immigrants as dangers to the country benefits him politically, and his indifference to amending the nation's laws on gun ownership make him uniquely incapable or unwilling to do anything about racist acts of violence besides to wring his hands in 280-character bursts on Twitter.