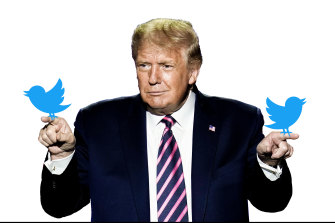 The US COVID-19 death toll of 200,000 leaves a terrible legacy of misery. However, President Donald Trump’s tweets tell a decidedly different story.

He’s blamed China; he’s blamed state governors. He’s blamed the CDC for the spread of inaccurate data, while retweeting misinformation himself. And interviews with journalist Bob Woodward reveal he knowingly misled the public all along.

Of the more than 5000 tweets and retweets President Trump has sent this year, some 300 have been related to his public messaging on COVID-19, which he first tweeted about on January 24 this year.

As coronavirus deaths in the US neared 200,000, a string of 18 interviews with journalist Bob Woodward from February this year were made public. They revealed the President knowingly understated the threat of the virus to the public from February 7, when he told Woodward it was "deadly stuff".

On the same day, Trump sent a tweet commending Chinese President Xi Jinping on his response to the pandemic, falsely predicting that warmer weather should offer hope for an end to the virus.

March saw a marked shift in Trump’s public messaging on COVID-19, which was eventually siphoned into alarm for the nation’s potential "depression" after New York went into lockdown following a mass outbreak.

Appearing on Fox News on March 24, Trump insisted the US would reopen in time for Easter.

“You can’t just come in and say let’s close up the United States of America: the biggest, the most successful country in the world by far,” he said.

Despite Trump’s comments, some governors imposed further restrictions, prompting Trump to shift his focus once more, blaming city lockdowns for slowing the US economy.

In a barrage of tweets, the President encouraged residents of Minnesota and Michigan to protest lockdowns in their respective states, while the US death toll rose from 1001 to 40,533 in the three weeks since his Fox News appearance on March 24.

As April drew to a close, Trump pivoted again, pointing to mass testing as the key driver for increased case numbers across the US. It was done as the US death toll reached 100,000 on May 27.

After the US COVID-19 death toll reached 100,000, mass testing became the core driver of Trump’s public messaging on COVID-19. And Trump, as has become expected of him, doubled down on Twitter.

In tweets Trump sent through June and July, he repeated claims of a lower mortality rate in the US, prompting questions of how the President's administration is measuring success.

In early-August, Trump fielded such questions in a video interview with journalist Jonathan Swan, who picked apart Trump’s messaging, which favoured death as a proportion of cases.

“I’m talking about death as a proportion of population. That’s where the US is really bad. Much worse than South Korea, Germany,” Swan said.

At the time, US COVID-19 deaths as a proportion of cases were 3.3 per cent. But health experts supported Swan’s line of questioning, asserting that the per capita death rate should be the primary indication of the overall disease threat to any given country.

At the time of publication the US COVID-19 deaths per 100,000 population was among the top 15 worst affected countries in the world, currently at 60.14, while Australia is at 3.30.