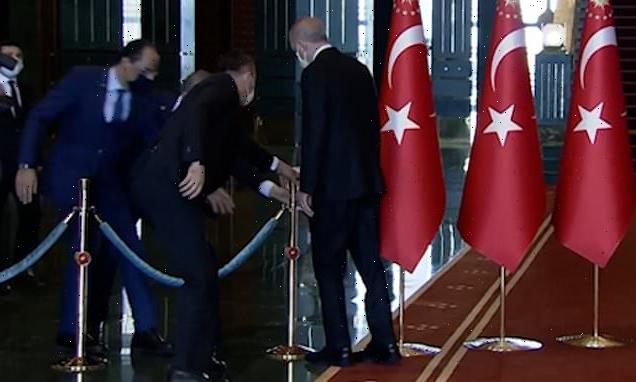 Allies of Turkish President Erdogan have been forced to deny he is suffering health problems after footage of him apparently struggling to walk emerged online.

Erdogan, 67, was filmed during Sunday’s G-20 summit in Rome appearing unsteady on his feet, leading to intense speculation about his health including rumours he had died after he then failed to show up at COP26.

Thirty people are now being investigated for ‘spreading disinformation’ after tweeting about Erdogan using the hashtag ‘olmus’, which roughly translates as ‘rumoured to be dead’.

Meanwhile the president’s allies have denied there is anything wrong, posting videos of him at an event in Ankara on Wednesday while insisting he looks ‘very healthy.’ 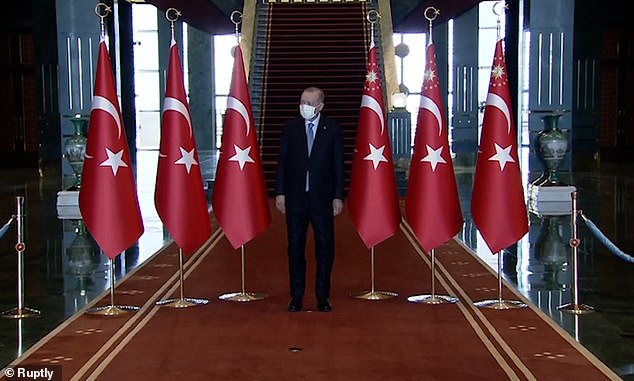 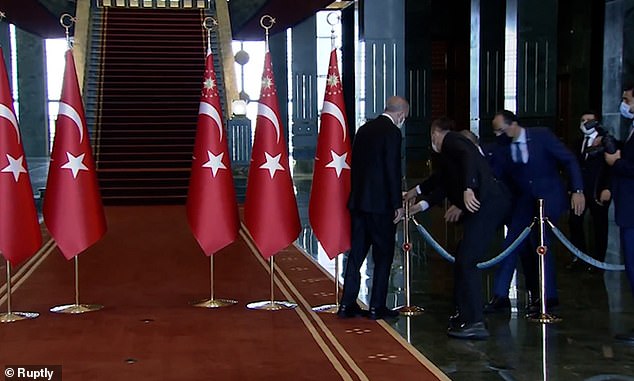 The Turkish president was filmed posing for a red-carpet photo before walking slowly off to one side, as guards rushed to move a rope barrier out of his way

Turkey’s disinformation law only came into force last month, and punishes users with up to five years in jail if they are caught spreading ‘false information’ – though campaigners say it will actually be used to stifle free speech.

The users are also being investigated for insulting the president, a years-old law which can result in up to four years in jail.

Speculation about Erdogan’s health is nothing new, with the latest round sparked by his appearance at the G-20 in Rome on Sunday.

After Erdogan posed for a red-carpet photo, he was filmed walking away – apparently unsteady on his feet as guards rushed to clear a rope barrier out of his way.

It took until Monday for the footage to emerge on social media, at the same time as it was confirmed Erdogan would not attend the COP26 summit in Glasgow that day – ostensibly because of security issues.

That quickly led social media users to begin circulating rumours that he was suffering from a serious health condition or had died.

Erdogan’s spokesman subsequently tweeted a video of him walking into an event in Ankara on Wednesday, as allies said he is ‘very healthy’

Erdogan then reappeared at an event to mark the 19th anniversary of his party taking power in Ankara which was held on Wednesday.

Fahrettin Altun, Erdogan’s spokesman, tweeted a video showing him walking into the event in an attempt to dispel the rumours.

He uploaded it along with the caption ‘trust the friend, fear the enemy’.

‘The chief has arrived from Istanbul to Ankara,’ another party member tweeted. ‘He is very healthy.’

Erdogan underwent two surgeries in 2011 and 2012 to fix polyps – growths in his small intestine.

Since then he has gone on record several times to deny suffering cancer. 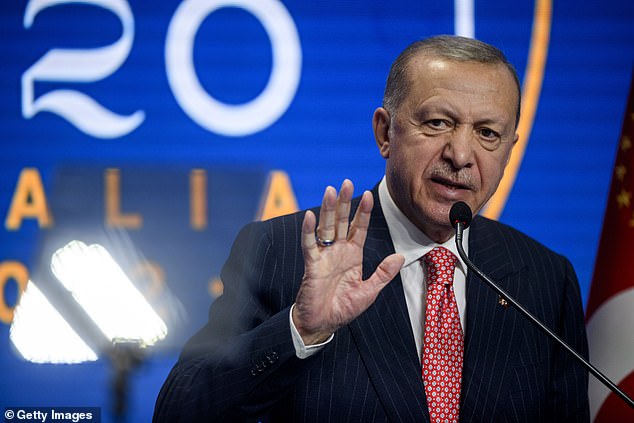 The video emerged as Erdogan announced he would skip the COP26 conference, leading some to speculate that he had died (pictured on Sunday at the G-20)

But rumours about his ill health began circulating at the start of the year when footage emerged which seemed to show him needing help to climb stairs.

A clip that showed him addressing members of his AKP party in July also showed him appearing to slur his words and trail off mid-sentence.

The strongman leader has dominated Turkish politics for the better part of two decades, as President since 2014 and as Prime Minister since 2003.

But his popularity appears to be waning, particularly among younger voters.

In 2019 mayoral elections, his party suffered several humiliating defeats in major cities such as Istanbul.

The next presidential elections are due to take place in 2023, with a recent article in Foreign Policy magazine questioning whether Erdogan will run.