In 1971, a 25-year-old high school science teacher named Jim Roberts found himself in a muddy hamlet 80 km outside Saigon, a “wide spot in the road,” as he called it, where the long slog of the Vietnam War felt particularly endless and futile.

Roberts, the son and grandson of military men, had enlisted over the heated objections of his father, who feared he would never return alive to his small West Virginia hometown. For Roberts, an Army infantry 1st lieutenant, the Vietnam conflict had become a “lonely war.” Photos he took one day of two kind women he met during that tour have led him on a 50-year quest to find them and thank them for breathing a little joy into his life so long ago. 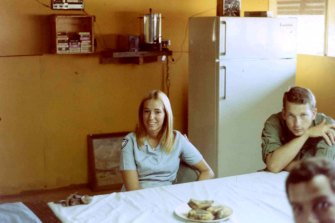 An unidentified “Doughnut Dolly” visiting US Army troops at the regional forces camp in the village of Dong Xoai, Vietnam, in 1971. Sitting on the right is Captain Jim Rice. Partially seen is the unidentified escort officer of the Dollies. Credit:Jim Roberts

Roberts was part of a mobile advisory team, one of only five soldiers sent to Dong Xoai to live among displaced farmers and to train regional forces, assisting as observers and strategists when they went into the field to fight. He witnessed things so traumatising that he still can’t talk about them five decades later.

As the fighting waned his colleagues, one by one, began to go home. Five became four, then three.

One day, in that blur of awful days, his team got a radio call: incoming helicopter. They scrambled for their list of call signs used by friendly forces. Nothing.

“That can be good or bad,” he thought. 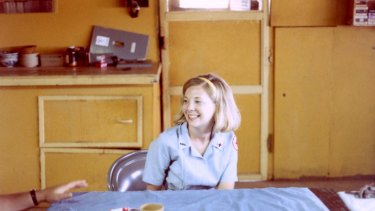 Another unidentified “Doughnut Dolly” visiting the regional forces camp in the village of Dong Xoai in 1971.Credit:Jim Roberts

Sometimes helicopters arrived to scoop them up without warning for assignments they hadn’t been briefed on. Sometimes it was just a routine stopover.

As Roberts waited for the Huey to touch down, he had no idea that he was about to experience something he considers magical. Out of that helicopter came two young women dressed in light blue. He was about to meet the “Doughnut Dollies,” an extraordinary cast of women working with the American Red Cross who risked their lives flying into combat zones to spend a few hours playing word games with soldiers or holding storytelling sessions or just sitting and talking to give GIs a respite from the horrors they were encountering.

“I do remember some men just breaking down,” Linda Jager, a former Doughnut Dolly who now lives in Oregon, said in an interview.

The women had embraced that name even though they didn’t make doughnuts for the troops anymore as they’d done during World War II. It’s an “affectionate term that has been passed on from war to war,” Jager said. More than 600 Doughnut Dollies served in Vietnam, according to the American Red Cross, and three of them died there.

Roberts barely remembers the details of the few hours he spent with the two Doughnut Dollies who had descended into his life unannounced. While the helicopter pilot was returning to base to deal with a mechanical problem, he gave them a tour of the camp. They ate lunch together. They talked.

“Their voices,” he said, pausing to gather himself, his voice cracking. “Their voices were wonderful.”

While they talked, Roberts pulled out a single-lens reflex Mamiya camera, one of those boxy numbers that have faded into nostalgia. He’s kept the photos he took of the women that day with him all these years – as he returned stateside to his bride, as he taught junior high science at a prep school in Philadelphia, as he spent three decades teaching computer science at Carnegie Mellon University, and as he entered retirement seven years ago in a Pittsburgh suburb. In the images Roberts captured that day, it’s the easy smiles of the women that stand out. Such smiles were few during Roberts’s nearly year-long stint in the village.

One of the women, her long blond hair parted in the middle and framing a face that is all sharp, nicely defined angles, leans back in her seat. Her left arm is slung casually over the back of a folding chair. She’s looking toward the camera. She might have been sitting in a church hall or school gymnasium instead of a war zone.

Roberts snapped the other woman in profile. She’s leaning forward, looking at someone else. She’s got a simple hoop in her hair. She’s laughing. Laughter was just as much in short supply in the camp.

In recent years, Roberts has taken those photos to conferences, shown them to former Doughnut Dollies, and placed them on the internet. No one has been able to identify the women. But he has persisted in the search. There lives in Roberts a deep human desire to express gratitude.

If the women had been making a planned stop rather than a hastily arranged landing in a remote outpost, there might have been more clues. The Doughnut Dollies usually wore name tags. But in their hurried disembarking, it seems they’d left their name tags behind or just forgotten to put them on.

Roberts has a hard time articulating just why this is so important to him. But as he talks, there are faint echoes, like the soundings of a radar scanning the ocean bottom, about what’s going on inside his mind and his heart.

He talks about the journey home from Vietnam. He was in uniform on a flight from San Francisco to Philadelphia to be reunited with his wife, Linda Roberts, who was in medical school preparing for a long career as an internist. The returning soldiers were thought of by many Americans as murderers of innocents. They were pariahs.

“The people on the plane got up and moved to other seats,” Roberts recalled.

As he settled on the East Coast to resume his former life as a teacher, it seemed no one wanted to talk about the war. Not his friends. Not his family. He didn’t want to talk about it with anyone either.

“Not even your wife,” Linda Roberts could be heard saying in the background as she slid into the passenger seat of the car where her husband, whom she married shortly before he left for Vietnam, was talking on his cellphone.

“When you first got back you were strange,” she said, again in the background, a few moments later.

During their long marriage Jim Roberts has told her almost nothing about his experiences in that faraway village in that faraway time. It wasn’t until he started to write a self-published book about his posting in Vietnam that they began to talk in detail about those days.

(The proceeds go to the Veterans Breakfast Club, an organisation that connects veterans to talk about their wartime experiences and the challenges of returning to civilian life.)

Putting down on paper his recollections became a way for Roberts to process what he’d experienced, in a way he’d never been able to before.

There was no way for him to do that without also revisiting the two young women who passed through his life in an instant, but stayed with him.

Maybe someday he will be able to tell them what they meant to him.