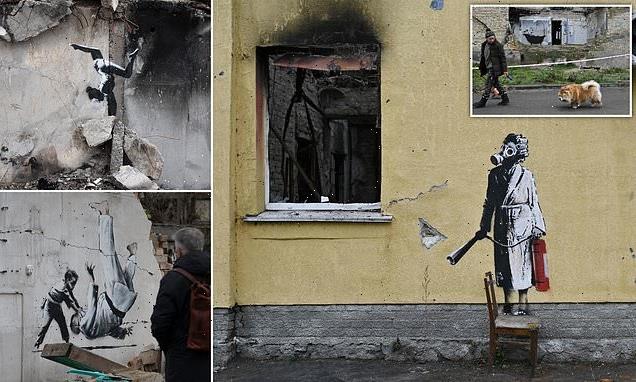 A pair of new artworks by Banksy have appeared in Ukraine after the British artist confirmed he had travelled there last week and posted images of several new works on social media.

One of the murals depicts what appears to be a woman wearing a dressing gown and a gas mask, carrying a bright red fire extinguisher.

Her face is tilted upwards towards scorch marks rising from a blown out window of a stark yellow building in the town of Hostomel, north of Kyiv.

A second graffiti was exclusively greyscale and showed a bearded man scrubbing his back while taking a bath, this time in the village of Gorenka.

The character, painted on an internal wall of a building whose exterior had been blown apart, looked to be surveying passers-by as they wandered along an adjacent road.

Speculation began mounting that the anonymous graffiti icon was in the war-torn country last week after a series of murals appeared in the town of Borodyanka, about an hour’s drive north-west of the capital close to Hostomel.

The artist confirmed suspicions when he posted a trio of images of the murals on Friday to 11.1 million Instagram followers.

In the images posted last week, a female gymnast can be seen balancing on her hands on rubble at the bottom of a an apartment building, which has been completely gutted by Russian shelling.

One mural depicted a man resembling Russian President Vladimir Putin being flipped during a judo match with a little boy.

Another showed two children using a metal tank trap as a seesaw, while a separate piece in nearby Irpin showed a rhythmic gymnast waving a ribbon while wearing a neck brace. 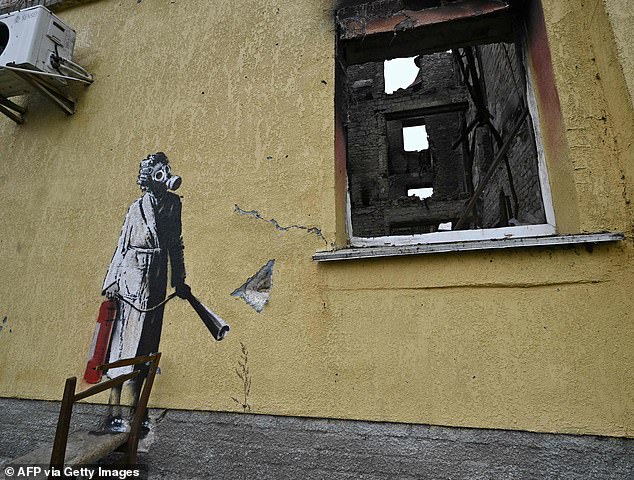 This photograph taken on November 16, 2022 shows a graffiti made by Banksy on the wall of a destroyed building in the town of Gostomel, near Kyiv, amid the Russian invasion of Ukraine 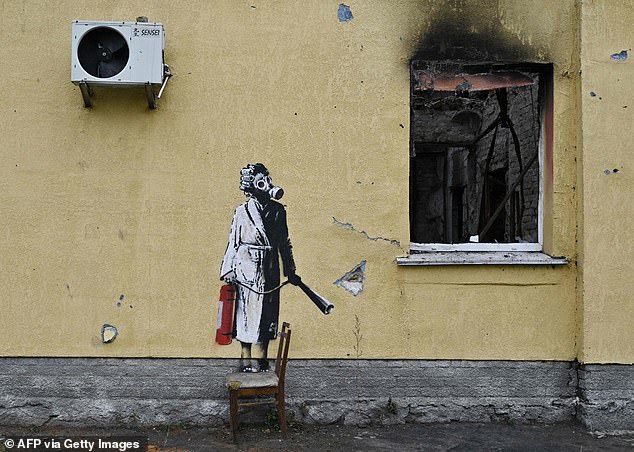 One of the murals depicts what appears to be a woman wearing a dressing gown and a gas mask, carrying a bright red fire extinguisher 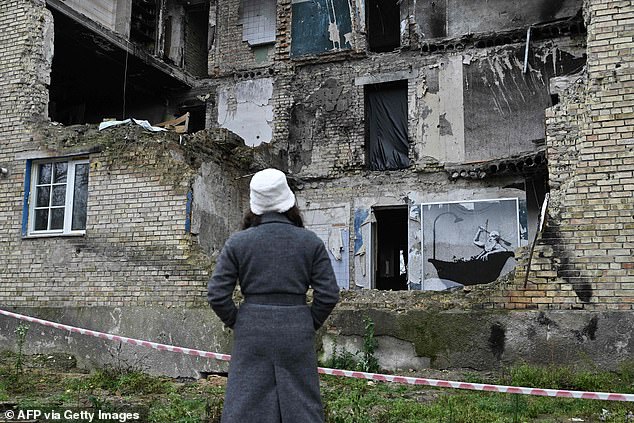 A woman looks at a graffiti made by Banksy on the wall of a heavily damaged building in the Gorenka village, near Kyiv, amid the Russian invasion of Ukraine 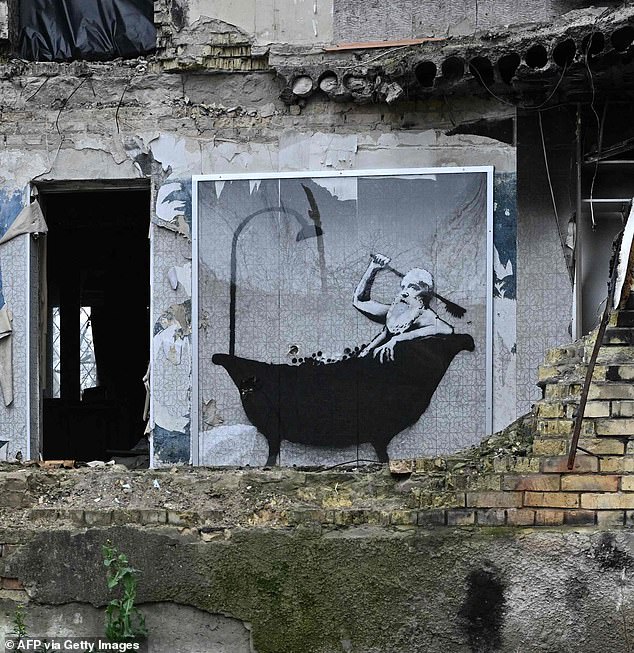 The character, painted on an internal wall of a building whose exterior had been blown apart, looked to be surveying passers-by as they wandered along an adjacent road 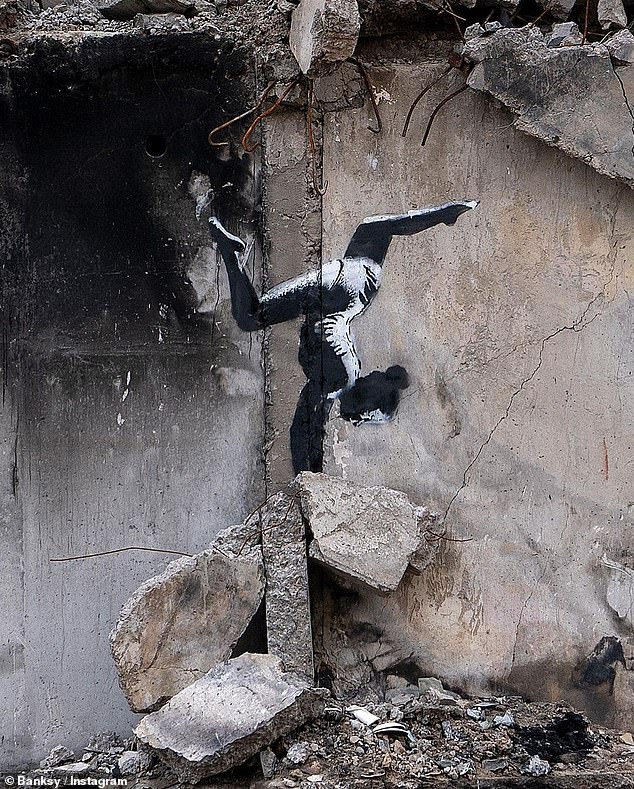 In the piece, a female gymnast can be seen balancing on her hands on rubble at the bottom of an apartment building in Borodyanka, which has been completely gutted by Russian shelling 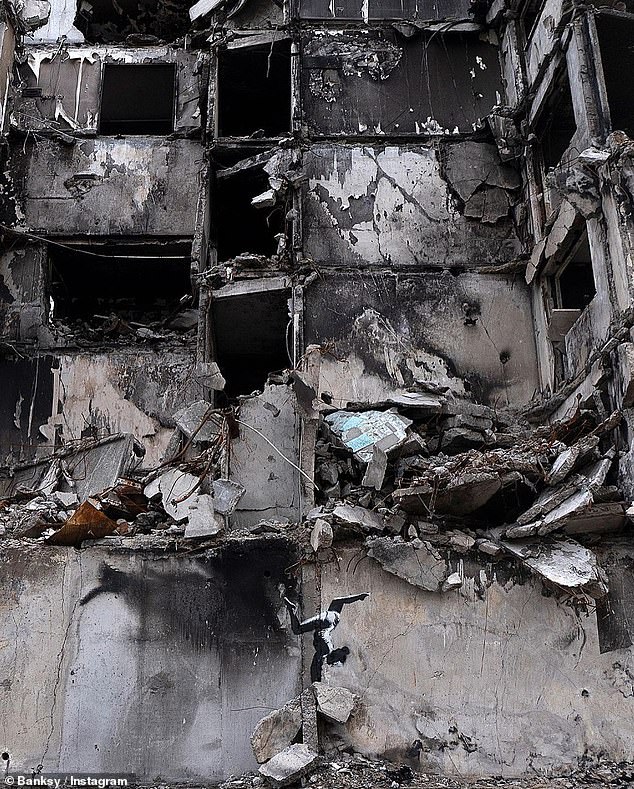 Speculation had been mounting that the anonymous graffiti icon was in the war-torn country after a series of murals appeared in the town, which is about an hour’s drive north-west of the capital (Pictured: Artwork of gymnast confirmed by Banksy)

Borodyanka was one of the towns hardest hit by Russia’s bombardment at the beginning of the invasion.

Russian soldiers invaded in February of this year, occupying the town for weeks before it was liberated in April.

Since then, the town has been the focus of reconstruction efforts, with several tower blocks demolished as a result of damage caused by the fighting.

It comes as President Volodymyr Zelensky has declared that the city of Kherson is back in Ukrainian hands following Russia’s retreat from the key battleground – the only regional capital Putin’s forces had taken since the invasion began.

Jubilant locals wept as they kissed and embraced the first Ukrainian soldiers to arrive in the centre of the Black Sea port, the first major urban hub that fell to Russia. 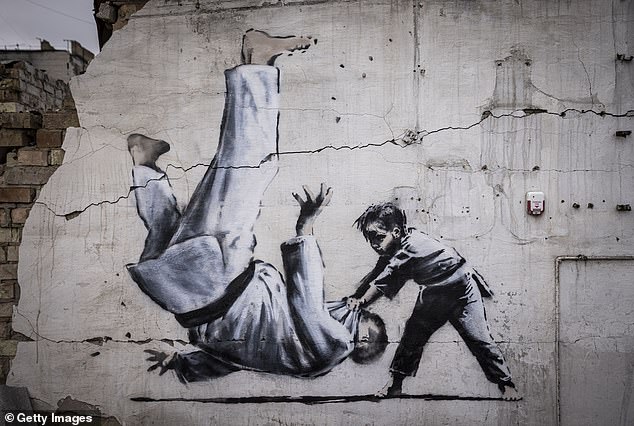 One mural in the town depicts a man resembling Russian President Vladimir Putin being flipped during a judo match with a little boy. Banksy has not confirmed if the artwork is his 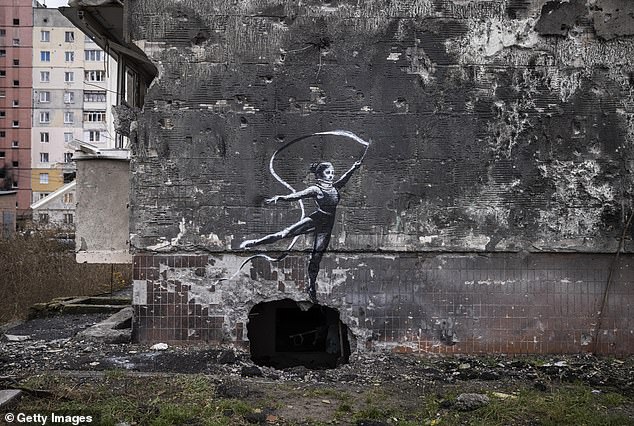 A rhythmic gymnast waving a ribbon while wearing a neck brace is among the other artworks near Kyiv which sparked rumours that Banksy was in town. He has yet to claim the piece as his

‘Our people. Ours. Kherson,’ Zelensky wrote on Telegram today as footage showed Ukrainian troops gathering with residents of the city to celebrate the landmark victory.

In an address to the Ukrainian people, the President said: ‘Today is a historic day, we are returning the south of our country, returning Kherson.’

He praised the strength and spirit of the people of Kherson, who he said ‘believed in Ukraine’ despite the ‘threats, repression and abuse of the occupiers’.

The southern city was liberated today after nine months under Russian occupation in what has been a major blow for the Kremlin.

Ukrainian soldiers were treated to a hero’s welcome by jubilant crowds as they arrived in the city centre throughout the day, with celebrations going on into the night.

An emotional video appears to show locals hoisting a Ukrainian flag on a monument in the city as they support one another and sing together. 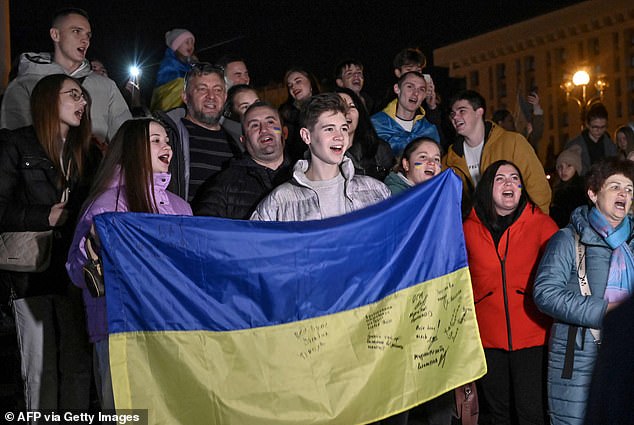 People wave a Ukrainian flag in Kyiv, the country’s capital, to celebrate the liberation of Kherson on Friday 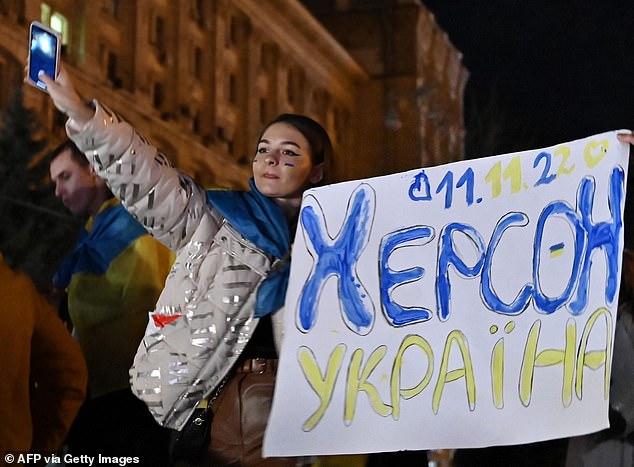 A woman holds up a slogan which reads ’11/11/2022 Kherson Ukraine’ in Maidan Square, Kyiv, to celebrate the city’s liberation

Earlier in the day, young men were filmed victoriously cheering as they raised a flag in the city’s Freedom Square.

The withdrawal, in the face of an intense Ukrainian counter-offensive, marks Russia’s third major retreat of the war.

As the news settles in of the city’s recapture, Ukrainians have been celebrating across the embattled country.

Videos out of Kherson appear to show locals partying in the streets tonight as they enjoy their first taste of freedom from the Russian occupiers since March.

Amid the celebrations, Mr Khlan said the humanitarian situation there is dire as the occupiers had destroyed key infrastructure. ‘The situation with fuel is difficult and there has been no electricity for a week,’ he said. Temperatures hit 3C (37F) yesterday, with freezing weather expected to arrive next week.

Nevertheless, victory parades started to break out after it had become clear that Russia no longer controlled the city.

‘Glory to Ukraine! Glory to Heroes,’ shouted one man in a video circulating on social media, a slogan first used by the country’s military as a greeting during Ukraine’s 1917-1921 war of independence.

Iryna Osadcha, a 30-year-old Kherson resident, said that she sobbed as she saw Ukrainian soldiers entering the city. ‘My emotions cannot be described in words,’ she told the Mail. ‘I want to thank Britain and the whole world for their help and faith in us.’

Dasha Zarivna, a senior Ukrainian presidential adviser who was born and raised in Kherson, said she was ‘extremely emotional to see Ukrainian flags flying over its city centre again’.

‘This war is only going one way,’ Miss Zarivna said. ‘The Russian armed forces and public in general can see this is becoming a historic humiliation. Hopefully the retreat from Kherson will force wiser heads in the Kremlin to seek a pragmatic way out of this disaster that they have got themselves into.’