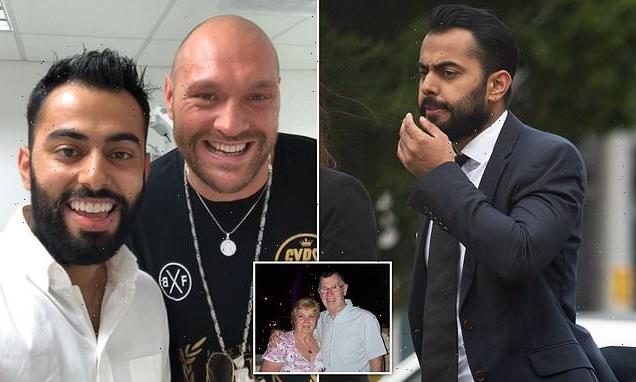 Tyson Fury’s wealthy dentist faces jail after being convicted of killing driver, 76, in road smash while speeding in his luxury Range Rover 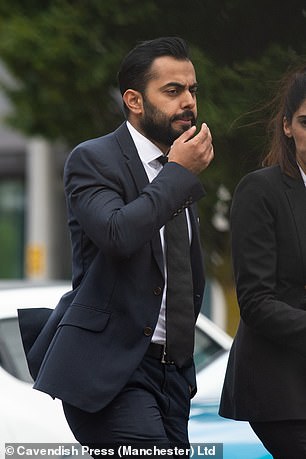 A wealthy dental surgeon who treats boxing champion Tyson Fury was facing up to five years in jail today after he was found guilty of killing a man in a road smash whilst speeding in his luxury Range Rover.

Naveed Patel, 32, who is nicknamed ‘the man with the golden smile’, was travelling at speeds of up to 59mph in a 40mph zone when his three litre TVD6 with personalised number plate ploughed into a white Mazda 3 emerging from a side street.

Inquiries revealed Patel was driving his £89,000 car so quickly he was unable to stop in time and despite slamming on the brakes, the black Range Rover was still travelling at 48mph at the moment of impact.

Further tests established the powerful car, which travels from 0-60 in just seven seconds, had been speeding at 59mph just five seconds before the collision and just two seconds before was traveling at 54mph.

At Minshull Street Crown Court, Manchester, Patel, who runs a cosmetic dental surgery clinic in Stockport and who has posted promotional videos of himself treating heavyweight boxer Fury, stood trial.

The jury took four hours and 50 minutes to find him guilty of causing death by careless driving.

He was bailed for reports to be prepared ahead of sentencing next month and was given an interim driving ban. 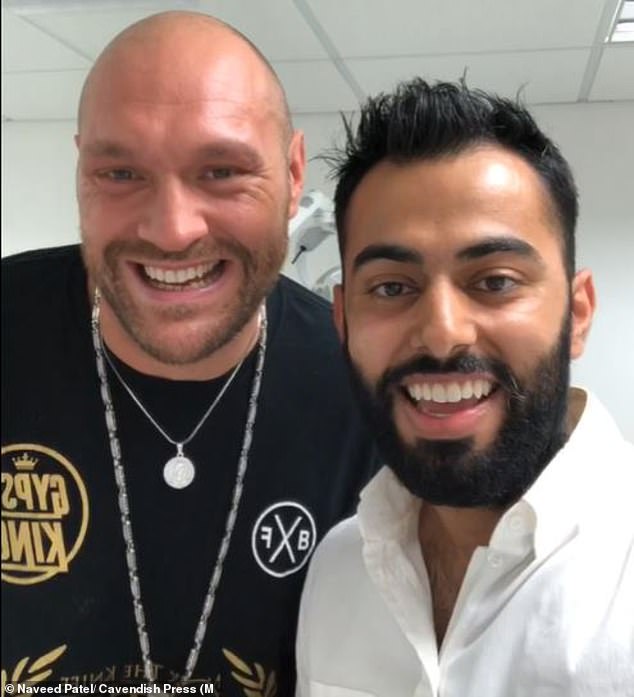 Patel, who runs a cosmetic dental surgery and regularly posts promotional videos with boxer Tyson Fury (pictured), was travelling at 20mph above the limit moments before the crash 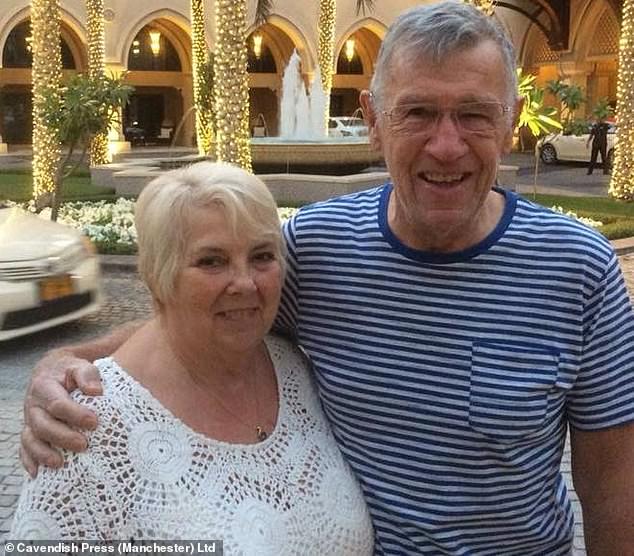 David Eyre (pictured with wife Joyce), who was on his way to a routine blood appointment, suffered catastrophic head injuries as a result of the crash and died two days later in hospital

The dentist who lives in a £600,000 house in Bolton denied wrongdoing and blamed the elderly victim for causing the road smash saying he may have suffered a ‘medical episode’ at the wheel.

The tragedy occurred at 11.35am on February 15 2019 after Mr Eyre, a grandfather from Royton, near Oldham was on his way to a doctor’s appointment for a routine blood test.

He emerged from Hilbre Avenue, onto A663 Broadway but apparently failed to spot Patel who was driving at speed along the main road. Patel took evasive action but was unable to avoid the Mazda.

Prosecutor Rob Hall told the jury: ‘Mr Patel’s excessive speed and his failure to assess the risks inherent in that stretch of road amounted to careless driving, and contributed to the death of Mr Eyre.

‘If Mr Patel had been driving within the speed limit, the collision could have been avoided or it would have happened at a much reduced speed.

‘Mr Patel placed the blame for the collision on Mr Eyre but the fact is he was still travelling eight miles per hour above the speed limit when the collision occurred. 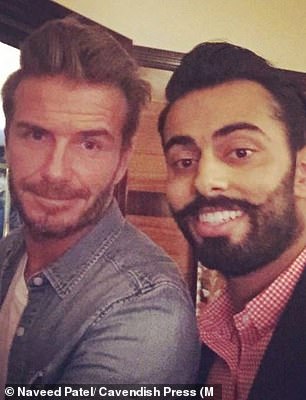 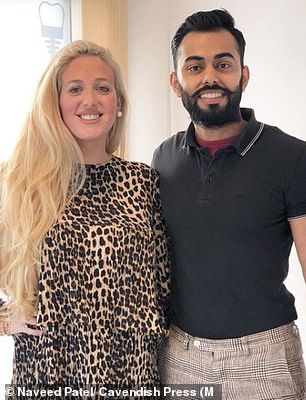 Naveed Patel (pictured, left, with David Beckham and, right, with Fury’s wife Paris) laid the blame with Mr Eyre and suggested he may have had a medical episode while he was driving 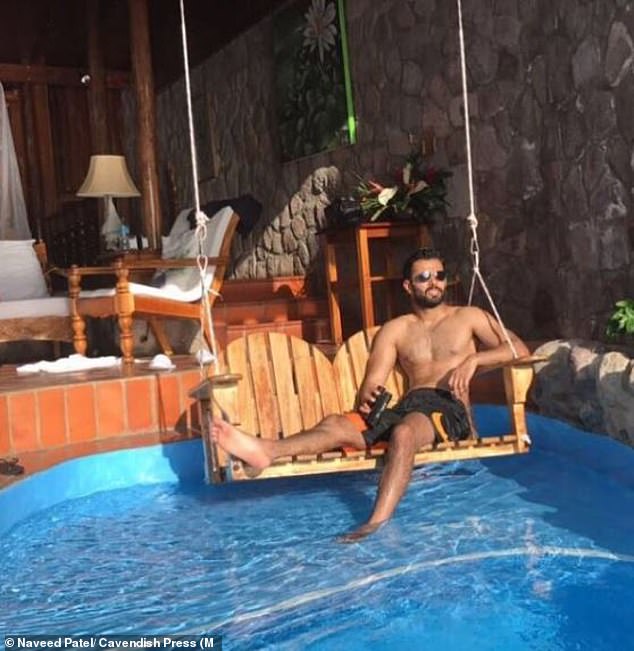 Despite braking and evasive action, jurors heard Patel was still travelling at 48mph at the time of the crash. Patel (pictured) is facing up to five years in jail and will be sentenced next month

‘David Eyre wasn’t to know that the Range Rover was travelling nearly 20 mph over the speed limit.

‘You may well think that Mr Eyre pulling out was clearly an error and that it was a significant cause of the collision.

‘Mr Patel suggests he was driving with the utmost care but while when he claimed that he braked to return to the speed limit, the onboard computer said it only dropped from 59 to 54 mph. He knew the risks on this road.

‘He drove this road three times per week for two to three years. All these risks are obvious on this stretch of road.

‘They would have been obvious to him. His speed and driving on that fateful Friday morning is another significant cause in this collision.’ 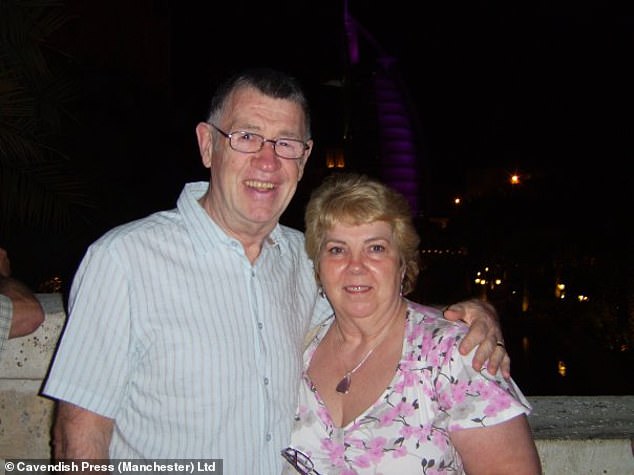 Patel told Manchester Crown Court if he could ‘somehow undo it all’ he would and said he has to live with the consequences of his actions. Pictured: David Eyre with his wife Joyce

Patel insisted he was not responsible for the crash but told the jury: ‘I am extremely traumatised and heartbroken by it all. If I could somehow undo it all I would.. I have to live with that, it is heartbreaking.’

Explaining the reason for him speeding Patel said he emerged from a 30mph zone and had sped up in his Range Rover only to realised he was going too fast and put his foot on the brake before the collision.

He added: ‘My attention was fully on the road. I fully expected the car coming down to stop and remain, until I had passed. I swerved to the right, unfortunately the cars collided. In my perception he did not stop at all, he kept coming.’

In video posted in February 2020 – a year after the tragedy – Patel welcomes Fury to his clinic and clowns around with him ahead of what is thought to be a cosmetic procedure.

During the video the boxer says: ‘I’m with the best dentist in the world and I want a smile just like his.’

Later following treatment Patel joked with Fury about the boxer’s defeat of Deontay Wilder to capture the WBC heavyweight championship and said: ‘I made him more numb that Deontay did.’