Uber shares opened 12 percent lower on Monday with stock trading trading below $40 as the ride-sharing service experienced yet another steep decline since it hotly anticipated market debut last week.

The ride-hailing giant’s stock fell and hovered around $37 on Monday afternoon on Uber’s first full day of trading.

It follows Uber’s rough and poorly-received initial public offering on Friday when it offered shares for $45 each.

Valued at some $82 billion in one of the biggest initial public offerings in the technology sector, Uber’s debut Friday was a major disappointment, losing 7.6 percent. 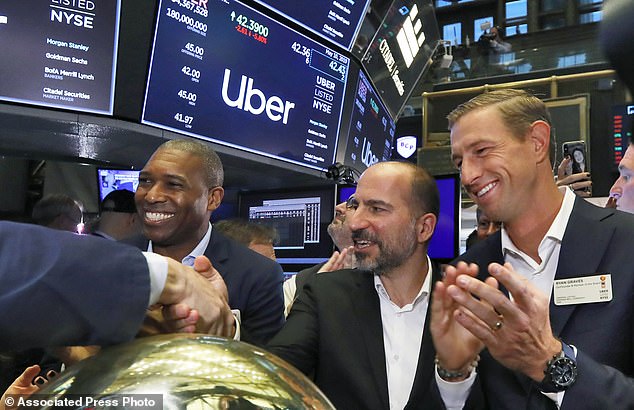 CEO Dara Khosrowshahi said he expected the stock to remain under pressure in the coming months in a memo that he sent to employees.

He acknowledged that Uber’s stock ‘did not trade as well as we had hoped post-IPO’.

‘Sentiment does not change overnight, and I expect some tough public market times over the coming months. But we have all the capital we need to demonstrate a path to improved margins and profits,’ Khosrowshahi said.

It is rare to see shares in a tech company hit so hard on going public.

Over the past five years, just 10 percent of similar companies finished their first day of trading below their IPO price, according to Matt Kennedy, senior IPO market strategist at Renaissance Capital.

Uber’s revenue last year surged 42 percent to $11.3 billion, but the company admits it could be years before it turns a profit.

Before going public, Uber lowered its valuation expectations twice in two months to address investor concerns over the company’s mounting losses, and priced its initial public offering at the low end of the targeted range.

Both IPOs took place against a backdrop of renewed concerns on Wall Street over global growth due to the trade tensions, although U.S. stock markets are all currently far higher than they were at the end of last year.

U.S. stocks in general moved sharply lower on Monday on Wall Street and extended the market’s slide into a second week as investors seek shelter from an escalating trade war between the U.S. and China. 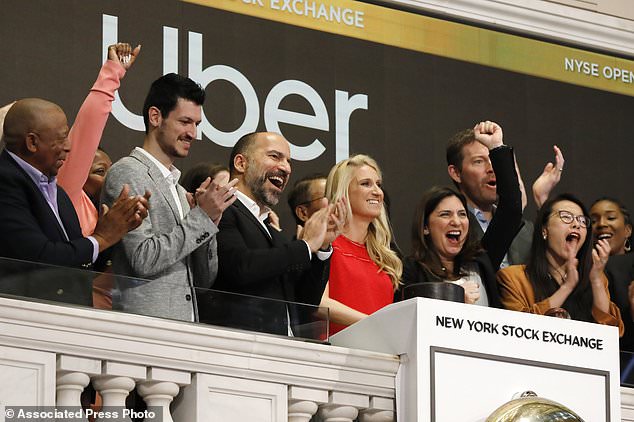 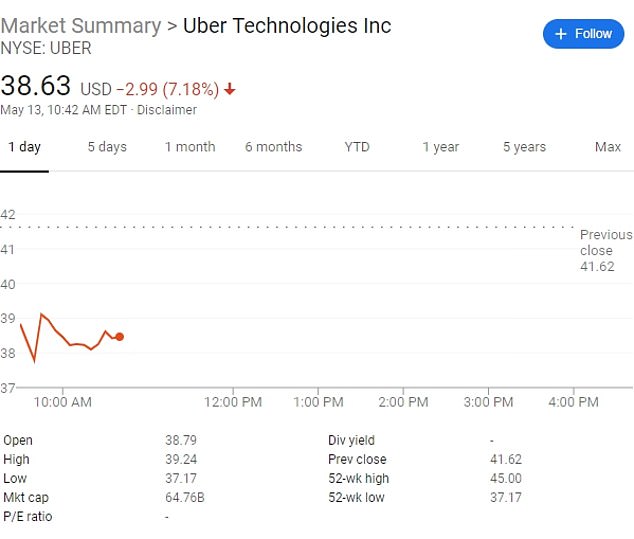 Uber’s IPO was quickly called the worst ever by at least one measure after the company’s investors suffered higher dollar losses in the first day than in any other float in the U.S.

The company’s stock plunged 7.6 per cent on the first day of trading, wiping about $6.3 billion from the company’s initial valuation of $82 billion.

But the sheer scale of Uber’s valuation means that that the raw dollar losses are the biggest ever, at least on paper.

In terms of the share price drop, Uber’s IPO ranks as the ninth worst first day performer of all time, according to DealLogic.

Only about a fifth of IPOs have ended their first day of trading in the red in the last two years.

Uber’s road to IPO was marred by several hurdles including increased regulation in several countries and fights with its drivers over wages.

Uber has also weathered controversies including revelations of a culture of sexism and bullying at Uber and U.S. Department of Justice investigations.

After a series of embarrassments, Kalanick was forced to resign in 2017 by a group of investors. Uber then hired Khosrowshahi to lead the company.

Uber has said it has the potential to grow not just in the cab hailing business, but also as a ‘superapp’ to provide logistic services, such as grocery and food delivery, organizing freight transportation, and even financial services, much like Grab, its Southeast Asian counterpart.

But market experts have struggled to find value in a company that has consistently posted losses, and warned that it may never be profitable.