BIZARRE footage of a large "cube" hovering above the ocean has sparked conspiracists on a new wave of theories. 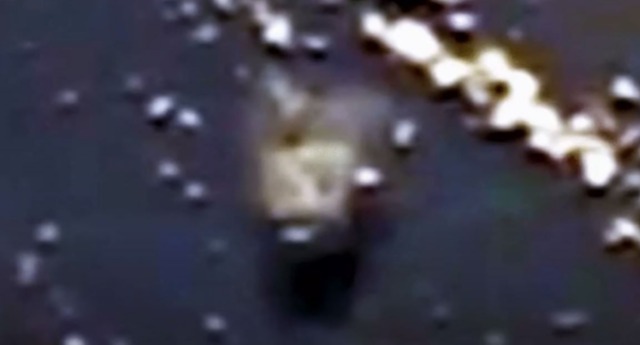 Posting on YouTube, the UFO hunter, who is best known for making the eccentric claim he saw a 10,000 year old alien face carved on Mars, believes the mysterious "craft" is getting ready to leave the ocean and launch into space.

The footage from ISS taken on Tuesday (12 October) shows a cloud-like substance staying motionless right above the ocean.

Scott wrote on UFO Sightings Daily saying: "I noticed this strange shape over the ocean when using the space station live cam.

"The object is a cube UFO over the ocean. It may have recently come out of the ocean, leaving the ocean floor and getting ready to leave into space."

In a close-up screenshot, Scott said he could see "two smaller squares attached" to the side of the solid UFO.

"This is 100% proof that UFOs can been seen from the Space Station," he added.

Some eagle-eyed viewers were quick to notice the shadow under the shape, with one suggesting it is "making it impossible that this is just a glitch."

A second wrote: "Geez you get the best sightings ever out of anyone in this world!"

It comes as a former air force chief claimed today how he saw a UFO firing four beams of light at a nuclear missile while in the fringe of space.

However, a bombshell press conference heard the former serviceman was ordered to never to breathe a word of what he saw.

Dr Jacobs was giving evidence, along with other former American air force chiefs, about how aliens tampered with weapons systems during tests, at nuclear bases and even started launch sequences before shutting the missiles down.