Washington: As Donald Trump neared the 80-minute mark of his first post-election rally on Sunday (AEDT), he asked his supporters to look up at the "very powerful and very expensive screen" his team had brought to the aircraft hangar at Valdosta, Georgia.

For the next five minutes, the crowd watched clips from two recent cable news stories alleging that Joe Biden’s victory in the November 3 presidential election may have been due to widespread voter fraud.

As the screen displayed grainy surveillance footage of election workers in Atlanta moving ballot boxes around a room, a news anchor narrated the action: "Four people, under a cloud of suspicion, begin what looks an awful lot like ballot stuffing."

The anchor said the incident "certainly needs to be investigated by law enforcement, as the greatest election heist in history may just have been caught on camera". 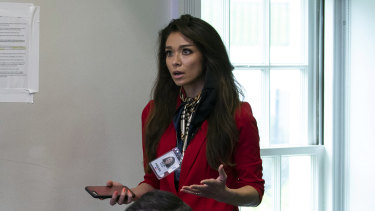 On her personal website, Chanel Rion, a White House reporter for OANN, describes herself as a dedicated member of "the Trump Army", as well as a "fierce foe of anything Clinton, of everything Obama, and as a total and unrelenting enemy of academic left-liberalism and political correctness".

Trump regularly calls on Rion for questions at his press conferences. Earlier this year, when Trump was facing criticism for calling COVID-19 the "China virus", she asked: "Mr President, do you consider the term ‘Chinese food’ to be racist because it is food that originated from China?" At another press conference she asked him why people were so concerned about rising COVID deaths given the number of babies that are aborted in the US each year.

OANN this week ran an "exclusive" story claiming the US Supreme Court may overturn the results of the election and its reporters regularly tell viewers that "the battle for the White House continues".

Newsmax TV, founded in 2014 as a spin-off from a conservative website and magazine, is more polished and more highly watched. The network has actively positioned itself as a reliably pro-Trump alternative to Fox, saying in its advertisements: "Don't be outfoxed, get the facts."

The main thrust of prime-time host Greg Kelly's program is that Trump still has a realistic chance of returning for a second term. "You can sense the momentum – this is not over," Kelly said this week, on the same day the US Supreme Court denied a bid by Republicans to overturn the election results in Pennsylvania.

"Joe Biden right now is not the President-elect," Kelly, a former Fox News presenter, told viewers. "I don't think there is going to be a Biden administration."

This approach is working for Newsmax, which now regularly out-rates cables networks such as CNBC and Fox Business. On Tuesday (AEDT) Newsmax scored a landmark victory when Kelly's 7pm show out-rated Fox host Martha McCallum in the crucial 25- to 54-year old demographic.

Before the election, Kelly's show usually attracted around 100,000 viewers a night; now that number has grown to nearly a million viewers on a good night.

Chris Ruddy, the chief executive of Newsmax and a close friend of Trump, said he was planning to go on a hiring spree to improve his network's content and take more market share away from Fox.

"We have the distribution now to compete with them head on," Ruddy told CNBC in an interview. 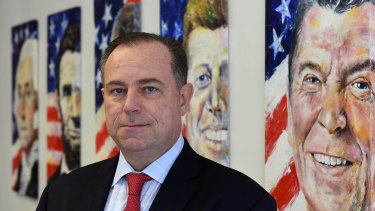 Even as Fox continues to attract significantly more viewers than Newsmax overall, its rival's growth is bad news for the network. Since the election, CNN has pulled ahead of Fox in the cable news ratings for the first time in decades – a reflection of the splintering of the conservative audience and unhappiness with the election outcome among Trump supporters.

Since the election Fox has launched a new slogan – "Standing Up for What's Right" – that appears on the screen during its opinion shows, an apparent bid to reassure viewers of its conservative bona fides.

It's unclear if Newsmax will be able to maintain its gains after Biden is inaugurated on January 20, a moment that will deprive it of a crucial point of difference from Fox. But for now the upstart challenger is enjoying its growth spurt. Kelly told viewers this week that his former employer was suffering from an "identity crisis" in the wake of the election. "I don't know if they know the country as well as we do here," he said with a grin.

Understand the election result and its aftermath with expert analysis from US correspondent Matthew Knott. Sign up to The Sydney Morning Herald‘s newsletter here, The Age‘s here, Brisbane Times‘ here and WAtoday‘s here.