Prickly proposition! Urban fox tips over a hedgehog who was stealing its food from a bowl left in a suburban garden

This is the hilarious moment a fox tipped a hedgehog out of a food bowl in a suburban garden.

Simon Woodley filmed the incident at his home in Sunderland last week.

The hedgehog can be seen nestling in the bowl which Mr Woodley said was normally used by the fox. 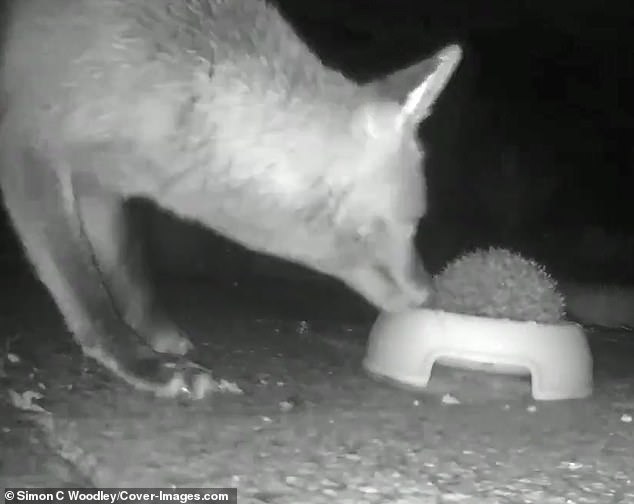 The flummoxed fox was struggling to find a way of removing the hedgehog from the bowl in a back garden in Sunderland. 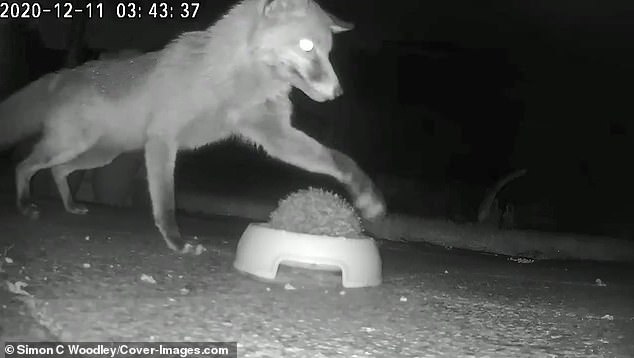 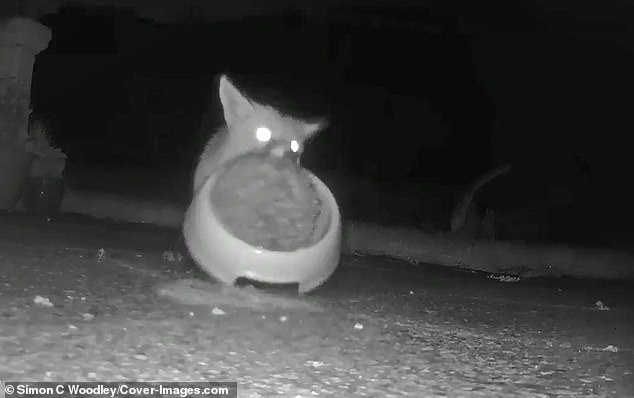 Eventually, the fox figured out that biting the side of the bowl would enable it to tip the hedgehog onto the floor

When the fox arrived for its late night feast it was slightly perturbed by the interloper.

The footage was captured on a night vision camera set up in the garden at 3.43am on December 11.

The fox momentarily considers how to dislodge the hedgehog, who is protected by hundreds of sharp spines.

Initially, the fox attempts to push the hedgehog out of the bowl using its snout. Then it unsuccessfully tries to use its paw.

Eventually the fox bites the side of the bowl to tip over the hedgehog leaving it on the path.

The fox returns a short time later to eat the remaining food strewn about the path. The hedgehog loses out on the feast because it remains curled up in its protective ball.

According to Mr Woodley: ‘This was taken in my garden in Sunderland. The hedgehog eats hedgehog food and I leave an egg out for the fox.

‘The fox must’ve thought the hedgehog was sitting on her egg, but it has already been eaten.’

Mr Woodley said he was relieved that neither animal had been harmed during the confrontation.

Urban red foxes are becoming more similar to domesticated dogs due to how they have adapted to city environments, according to new analysis.

The study found urban foxes in the UK have a smaller brain size capacity than their rural counterparts with a different snout shape also helping forage for food in urban surroundings. 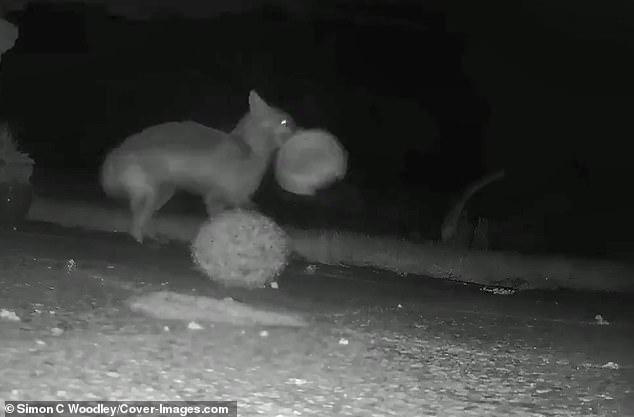 With most lockdown measures still in place, the study also suggested there have been more frequent animal sightings in the cities where red foxes have become well-established.

Dr Kevin Parsons – of the University of Glasgow’s Institute of Biodiversity, Animal Health and Comparative Medicine – led the study team.

He said: ‘We wondered whether this change in lifestyle was related to adaptive differences between urban and rural populations of red foxes.

‘We assessed skulls from hundreds of foxes found within London and the surrounding countryside, and saw that urban foxes had a smaller brain size capacity but also a different snout shape that would help them forage within urban habitats.

‘This could tell us whether the evolution of urban/rural differences was completely unique or something that has potentially happened previously.’