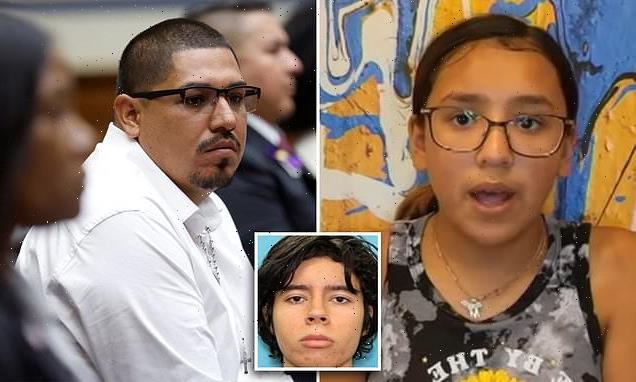 ‘He told my teacher goodnight, and shot her in the head’: Uvalde massacre survivor, 11, tells Congress she ‘grabbed blood and put it all over’ her Lilo and Stitch shirt because she thought gunman would return and says ‘it will happen again’

Uvalde school shooting survivor Miah Cerrillo, 11, recounted to Congress on Wednesday the horror of the massacre where she covered herself in blood to trick the shooter into thinking she was dead.

The fourth grader insisted during a hearing to the House Oversight and Reform Committee that there will be more school shootings and said that she doesn’t feel safe at school because she thinks it will happen again.

‘[The shooter] shot the little window and then he moved to the other classrooms and then he went – there’s a door between our classrooms – and he went through there. Then shot my teacher and told my teacher ‘goodnight’ and shot her in the head,’ Cerrillo explained of the mass shooting.

‘And then he shot some of my classmates and the white board. When I went to the backpacks, he shot my friend that was next to me and I thought he was going to come back to the room,’ she continued in pre-recorded remarks that were played before the panel .’So I grabbed the blood and I put it all over me.’

‘I stayed quiet and then I got my teachers’ phone and called 9-1-1… and told her that we need help,’ Cerrillo said, claiming at that point police came to her classroom.

On May 24, 2022, Salvador Ramos, 18, opened fire at Robb Elementary School in Uvalde, Texas, killing 19 elementary-aged students and two teachers and injuring several others. Before going to the school he shot his grandmother – who survived. 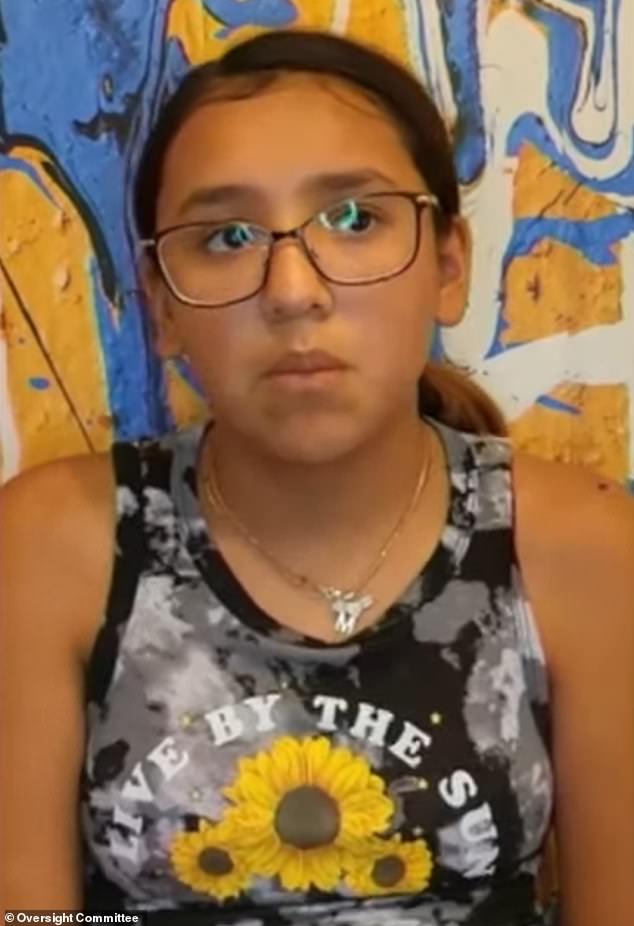 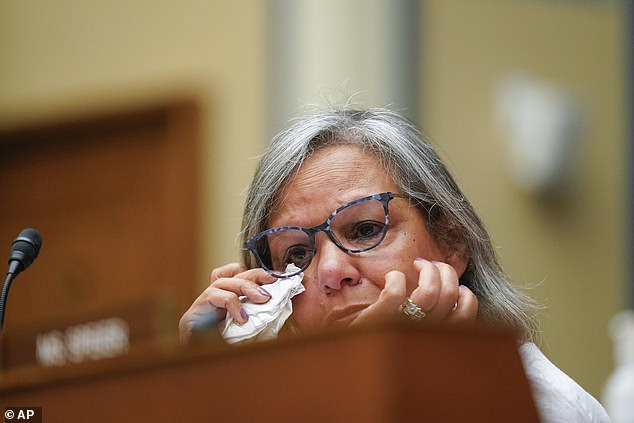 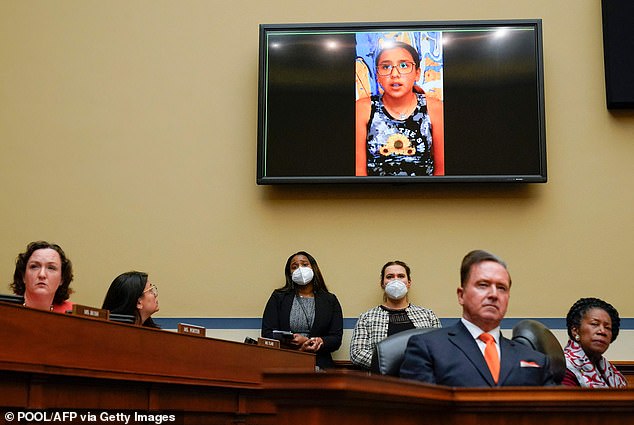 ‘[He] told my teacher ‘goodnight’ and shot her in the head,’ Cerrillo explained in pre-recorded testimony played before the panel on Wednesday. ‘I thought he was going to come back to the room. So I grabbed the blood and I put it all over me’ 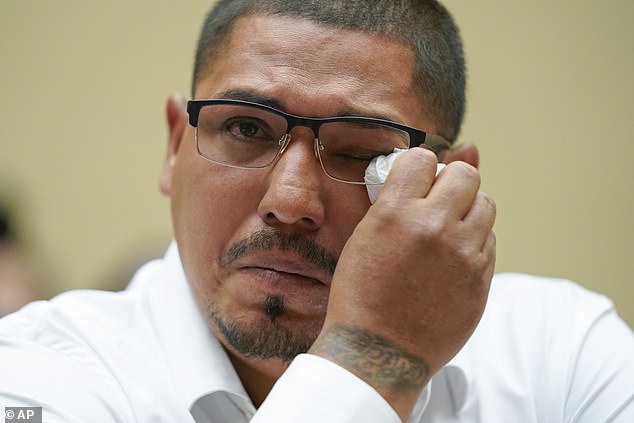 The Justice Department has named a team of nine people, including an FBI official and former police chiefs, to aid in a review of the law enforcement response to the Uvalde, Texas, elementary school shooting that left 19 children and two teachers dead.

Attorney General Merrick Garland announced the team during a meeting in his office in Washington on Wednesday. The critical incident review is being led by the Justice Department’s Office of Community Oriented Policing Services.

The review will include an examination of police policies, training and communication, along with the deployment of officers and tactics, the Justice Department said.

It will also examine who was in command of the incident and how police prepared for potential active-shooter incidents.

In a statement, the Justice Department said it was committed to ‘moving as expeditiously as possible in the development of the report.’ Officials said the team would conduct a complete reconstruction of the shooting; review all relevant documents, including policies, photos and videos; conduct a visit to the school; and interview an array of witnesses and families of the victims, along with police, school and government officials.

‘Nothing can undo the pain that has been inflicted on the loved ones of the victims, the survivors and the entire community of Uvalde,’ Garland said in a statement. ‘But the Justice Department can and will use its expertise and independence to assess what happened and to provide guidance moving forward.’

The review was requested by Uvalde´s mayor. Such a review is somewhat rare, and most after-action reports that come after a mass shooting are generally compiled by local law enforcement agencies or outside groups.

The Justice Department conducted similar reviews after 14 people were killed in a terrorist attack in San Bernardino, California, in 2015 and after the mass shooting at the Pulse Nightclub in Orlando, Florida, the deadliest attack on the LGBTQ community in U.S. history, which left 49 people dead and 53 people wounded in 2016.

Cerrillo pleaded for more security at her school, nodding her head when her father asked if she thought ‘it’s going to happen again.’

In the second part of the hearing, lawmakers on the panel were given the opportunity to question experts in the field both in favor of and opposed to implementing stricter gun reform laws.

Progressive Representative Alexandria Ocasio-Cortez during that period of the hearing called it ‘globally embarrassing’ that the U.S. has so many mass shootings – and in particular shootings at schools.

‘Between 2009 and 2018, how many school shootings did the US have?’ the New York lawmakers asked Rebecca Pringle, president of the national education association.

‘Not only is it not normal, it is internationally embarrassing and delegitimizing to the United States,’ she continued. ‘Because for all the billions and trillions this body authorizes in the name of national security, we can’t even keep our kids safe from their schools being turned into a war zone.’

Dr. Roy Guerrero, a pediatrician in Uvalde, Texas, testified before the committee during the first part on Wednesday and detailed his care of Cerrillo and other children rushed to the hospital in the aftermath of the shooting.

‘As I entered the chaos of the ER, the first casualty I came across was Miah Cerrillo,’ Guerrero recalled. ‘She was sitting in the hallway, her face was still clearly in shock but her whole body was shaking from the adrenaline coursing through it.’

‘The white Lilo and Stitch shirt that she wore was covered in blood and her shoulder was bleeding from a shrapnel injury,’ he said.

‘Sweet Miah, I knew her my whole life,’ the doctor added during his in-person opening statement to the Oversight panel. ‘As a baby she survived major liver surgeries against all odds. And, once again, she’s here as a survivor. Inspiring her with her story today and her bravery.’

The teachers killed are Irma Garcia, 48, and Eva Mireles, 44. 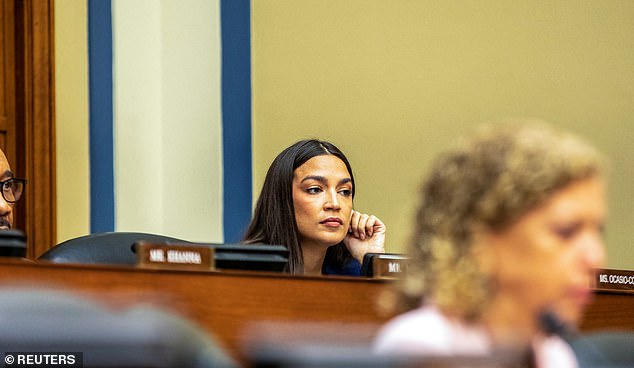 Representative Alexandria Ocasio-Cortez called it ‘internationally embarrassing’ for the U.S. to spend ‘billions and trillions in the name of national security’ and ‘we can’t even keep our kids safe from their schools being turned into a war zone’

Other witnesses for the hearing testifying on gun violence before the congressional oversight committee were the mother of a 21-year-old shot in the Buffalo, New York mass shooting last month, Cerrillo’s father and Kimberly and Felix Rubio, the parents of one of the deceased from the Uvalde school shooting.

Lacretica Hughes also spoke to the committee from the witness table about her son, Emanuel, who was shot in the head and killed at a party in April.

‘I come because I love my baby girl – but she is not the same little girl that I used to play with and run with and do everything because she was daddy’s little girl. I have five kids and she is the middle child. I don’t know what to do,’ he pleaded during Wednesday’s hearing.

They demanded a ‘ban on assault rifles and high capacity magazines.’

‘We understand that for some reason to some people – to people with money, to people who fund political campaigns – that guns are more important than children,’ Mrs. Rubio pleaded through tears.

‘So at this moment, we ask for progress.’ 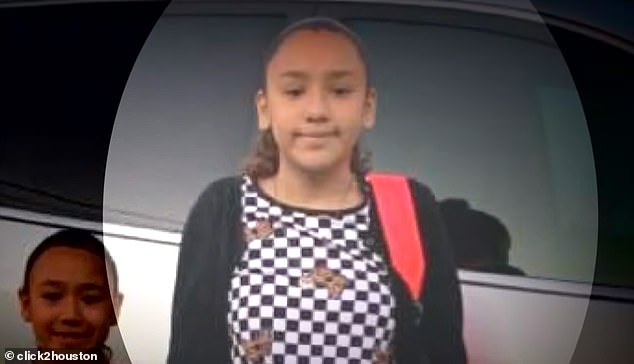 Miah Cerrillo is an 11-year-old who was at the end of her fourth grade school year at Robb Elementary in Uvalde, Texas when the shooting happened last month

The first was in Buffalo, New York at a Tops Supermarket in a predominately black community where a racist 18-year-old, Payton Gendron, walked into the store and gunned down 13 people – leaving 10 dead. Eleven of the 13 shot were black.

A little over a week later, Ramos, who is also 18, shot up Robb Elementary School, killing 21 people.

Main priorities of Democrats appear to be raising the age to purchase firearms – specifically semi-automatic rifles – from 18 to 21, increasing background check requirements and implementing red flag laws that prevent certain individuals from purchasing a gun.