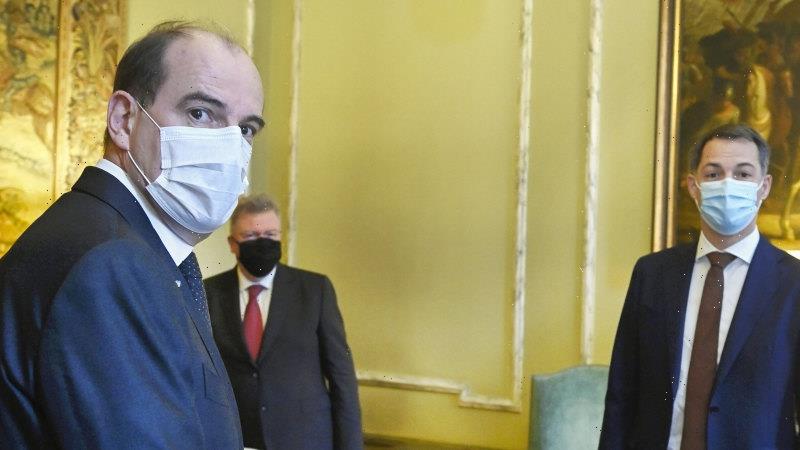 Paris: French Prime Minister Jean Castex has tested positive for the coronavirus and is displaying slight symptoms amid rising case numbers in France and much of Europe.

Castex, who is fully vaccinated, will isolate for 10 days, France’s public broadcaster reported. His office told the AFP and Reuters news agencies about the diagnosis.

The 56-year-old’s positive PCR test was announced on Monday evening (Tuesday AEDT) hours after he met with his Belgian counterpart, Alexander De Croo. Photos showed the two men standing side-by-side without masks inside Edgmont Palace in Brussels, though they kept a distance between each other. Both wore masks when they greeted each other outdoors with a fist bump and embrace. 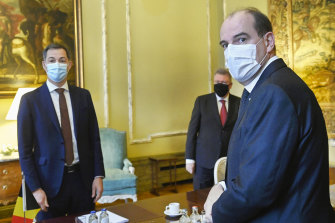 French Prime Minister Jean Castex, right, and Prime Minister Alexander De Croo of Belgium, left, are seen at the start of a Belgian-French security consultation meeting at Egmont Palace in Brussels on Monday.Credit:AP

De Croo and four other Belgian ministers would be tested on Wednesday and would stay in quarantine until then, VRT quoted a spokesperson of De Croo as saying.

Castex had already entered quarantine earlier on Monday, after his 11-year-old daughter tested positive for the virus, making him a person of contact. The European Medicines Agency has not yet approved a coronavirus vaccine for children under 12, but has said that a decision could be reached this week.

Case numbers in France have increased by about 80 per cent over the past week. But even as surges in neighbouring countries have prompted partial or full lockdowns, the French government has appeared confident that its second-dose vaccination rate of 70 per cent puts the country in a better position than many others to cope with another wave of the virus.

France was one of the first European countries to introduce vaccine requirements and a health pass this year, and once-weekly protests in the mainland have largely faded.

But similar requirements prompted violent demonstrations in the French overseas department of Guadeloupe over the past few days. A general strike entered its second week on Monday and many stores remained shuttered after nighttime looting, and schools closed due to the unrest.

President Emmanuel Macron said the violence over COVID-19 restrictions had created a “very explosive” situation in the territory. 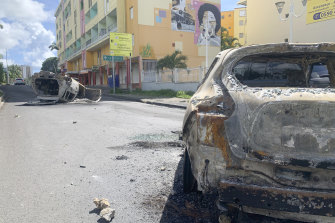 Charred cars in Le Gosier, Guadeloupe. French authorities sent police special forces to the Caribbean island as protests over COVID-19 restrictions erupted into rioting and looting for a third day.Credit:AP

Hours before Caltex was to hold talks with legislators from the Caribbean archipelago in Paris, there were signs of protests spreading to Martinique, another French overseas territory 190 kilometres south of Guadeloupe.

Compulsory vaccination has touched a nerve in a population that is descended from slaves who worked on French sugar plantations and that during the 20th century was systematically exposed to chlordecone, a toxic pesticide used in banana plantations, that has since then been linked to unusually high rates of prostate cancer on both islands. 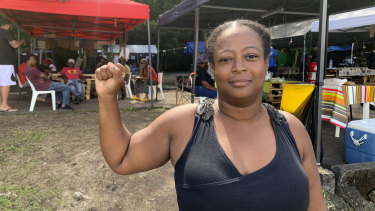 “We are descendants of slaves, and for us, control over our bodies is really important,” said Pamela Obertan, 40, a political scientist in Guadeloupe who helped organise protests against vaccine requirements. “The government wants to impose a medical experiment. We are still medical experiments.”

Castex has received two AstraZeneca shots – the first dose in March, to help bolster confidence in the vaccine, and the second in June. So far, most people under 65 years are not eligible for a booster shot in France.

He has been the public face of government news conferences, in which he outlines the country’s vaccination strategy and pandemic response, since becoming Prime Minister in July 2020.

Castex has had to quarantine for coronavirus exposure several times, including after his wife and after Macron were infected, but he had not tested positive himself before Monday.