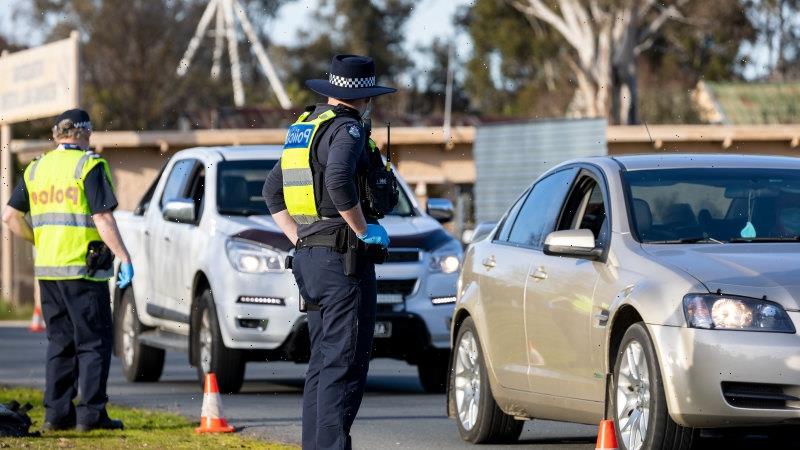 Victoria is on high alert as health authorities listed new COVID-19 exposure sites after two removalists from Sydney visited Melbourne while infectious and two members of a family in the city’s north-west tested positive for COVID-19 after returning from NSW.

Three removalists stayed overnight in Victoria last Thursday after completing a drop-off in the City of Hume and a pick-up in Maribyrnong. They later drove to South Australia before returning to NSW. Two of them have since tested positive to COVID-19.

The health department is warning anyone who attended Coles Craigieburn Central on July 10 between 5.28pm and 6.38pm to get tested immediately and quarantine for 14 days after the site was listed as a Tier 1 on Monday night.

Service station Metro Petroleum in Broadmeadows, was listed as a Tier 2 site from 1.19pm and 2.04pm on July 11. Anyone at the site during that period is required to get tested urgently and isolate until they receive a negative result.

And the Craigieburn Central Shopping Centre in Craigieburn Road is listed as a Tier 3 site as a case visited on July 10 between 5.28pm and 6.38pm. The advice for this site is to monitor for symptoms and get tested if any appear.

The sites listed had positive cases visit after the date on which authorities said the removalists had left the state and travelled to South Australia.

Victorian COVID-19 response commander Jeroen Weimar said one of the three was contacted by NSW Health on Friday, when in South Australia, and was identified as a primary close contact of another case.

He said all three removalists were now back in Sydney. In a daily email, the Health Department said ongoing interviews with the trio “are proving complex and challenging”.

“The department is also using other methods of validation to determine their movement,” the email said.

In an afternoon press conference, Mr Weimar said there had been a “fourth incursion” as a result of a family travelling from NSW.

“We now have a family of four, who returned from Sydney. Three of those [family] members returned by air on July 4,” he said.

Those three tested negative for COVID-19 two days after their flight. Another member of the family travelled to Melbourne by car on Thursday.

“Two members of the family became symptomatic and got tested yesterday. We received the results [in the] late morning today, so they are both positive.

“The other two members of the family are being tested again today.”

Mr Weimar said authorities were not concerned about the risk of contagion on the flight.

“If these individuals have returned a negative test result two days after getting off that plane they don’t represent an infectious risk on that flight,” he said. 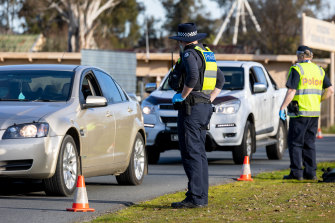 Victoria has shut the border to all of NSW and the ACT.Credit:Jason Robins

The family, from the City of Hume in Melbourne’s outer north-west, has been isolating since returning to Victoria on a red zone permit.

The family member who drove from NSW is helping authorities map their route to identify potential exposure sites.

Mr Weimar also said investigations indicated the removalists who were working while contagious in Victoria made their first drop-off at a City of Hume address on Thursday and made a second pick-up in Maribyrnong later that day before leaving for Adelaide. Two families linked to the workers have been directed to isolate as a precaution.

On Monday, South Australian authorities reported the death of a 72-year-old woman who had earlier been identified as suffering from the rare blood-clotting condition associated with the AstraZeneca COVID-19 vaccine.

The Therapeutic Goods Administration confirmed last week that the woman, who was in intensive care, had developed thrombosis with thrombocytopenia syndrome.

Mr Marshall said she received her first AstraZeneca vaccination on June 24 and was admitted to hospital on July 5.

The TGA previously confirmed two other people had died after developing the rare condition linked to the AstraZeneca vaccine: a 52-year-old Melbourne woman and a 48-year-old from NSW.

Fresh exposure sites to be added

Health Minister Martin Foley said Victorian health authorities were alerted to the initial positive case among the removalists late on Sunday night. The state’s list of exposure sites – which currently lists just one tier-two site, a Qantas flight from Launceston to Melbourne on July 2 – is expected to be updated later on Monday.

He noted that Victoria’s “traffic light” travel permit system allowed for exemptions if a person had valid reasons and that may have been the case for the removalist, but authorities were still investigating his movements and permits.

“Once we get that detailed information from the gentlemen, we will be clearly sharing that with the Victorian community, particularly those parts of our community who we suspect will have to take further immediate action,” Mr Foley said.

Victoria recorded no new cases of coronavirus on Monday for the 12th consecutive day as hundreds of police were deployed to the NSW border in a bid to protect the state against the highly infectious Delta variant running rampant across Greater Sydney. The two COVID-positive family members who returned from Sydney will be included in Tuesday’s figures.

NSW reported a record daily total of 112 new cases on Monday. At least 34 of those new cases had been moving around the community while infectious.

On Sunday, NSW reported its first COVID-19 death this year – an unvaccinated woman in her 90s.

Non-residents from all of NSW and the ACT are now barred from entering Victoria after a hard border was enacted at 11.59pm on Sunday. Victorian residents can return to the state but must quarantine in their homes for 14 days.

Mr Foley was asked on Monday whether Victorian authorities would consider requesting that the Australian Defence Force help maintain the hard border.

“[Victoria Police did] seek assistance from the ADF and that was declined by the ADF,” he said.

“I’m sure if [Victoria Police] identify a need for further logistical support operations from the ADF, then they’ll go through the normal processes of the intergovernmental and service arrangements to make that request again, but I wouldn’t rule it out.”

Queensland has so far held off on enacting a hard border with NSW.

Victorian Nationals leader Peter Walsh said on Monday morning that there was “not much logic” to the Victorian government decision to label Canberra a red zone despite zero instances of community transmission.

But he praised the police for relying on number plates so they did not have to stop every single person travelling into Victoria from NSW.

“For the last two weeks the booze buses have been positioned away from the border but stopping people going through based on number plates and checking licences. That’s the sensible way to do it rather than have everyone checked, because it just stifles those communities.

“To have school buses checked, for heaven’s sake, is just silly.”

Mr Foley responded to criticism on Monday morning, saying there was a simple rationale behind the state closing its border to the ACT: it was surrounded by regional NSW and just two hours from western Sydney.

“Without the sort of sophisticated permit system that Victoria and other states have in place, [it can be] exposed to a lot of free movement in and out of regional NSW,” he said.

On Monday Victorian Premier Daniel Andrews said the government would give a $10 credit to people who registered their myki card.

NSW Premier Gladys Berejiklian has conceded her government cannot predict when Sydney’s lockdown will end, prompting NSW and the Commonwealth to try to devise a new scheme to protect jobs, including a federal overhaul of disaster payments that might need to be available for weeks to people unable to work.

There were 19,239 test results processed in Victoria on Sunday, while 12,005 people received a COVID-19 jab from state health authorities. There are now 19 active coronavirus cases across the state.

An earlier version of this article said the COVID-positive removalists had dropped off items at a City of Whittlesea address on July 8, the Victorian Health Department has since corrected the comments made by COVID-19 response commander Jeroen Weimar to indicate the crew actually stopped at an address in the City of Hume.