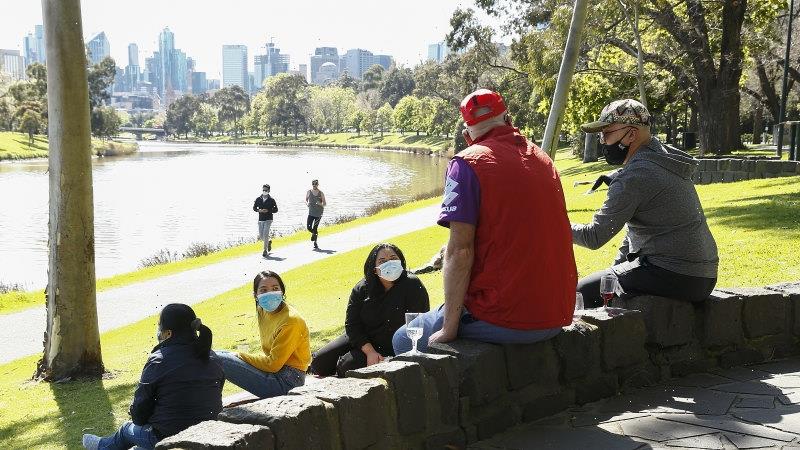 There was one death and 535 new cases of coronavirus recorded in Victoria on Saturday, as restrictions were loosened in Melbourne allowing people to meet outdoors.

Of the new cases recorded in the 24 hours to midnight on Thursday, 62 have so far been linked to known clusters, according to Victoria’s health department. 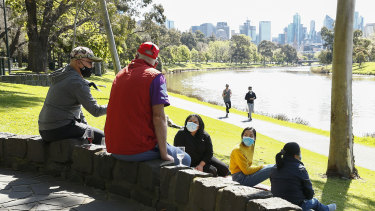 Up to five fully vaccinated Melburnians from a maximum of two households can have picnics together from Saturday, however alcohol remains banned.Credit:Daniel Pockett/Getty Images

More than 45,537 vaccine doses were administered in Victoria on Thursday and an impressive 61,622 tests were processed.

From Saturday, fully vaccinated Melburnians can meet up outdoors with one other household in groups of up to five adults plus dependents. The five-kilometre restriction on movement from the home has also been widened to 10 kilometres.

Outdoor gyms and skate parks have also been reopened, with Melburnians now allowed to exercise for four hours per day, instead of two.

Public transport into the city has also been restricted to prevent anti-lockdown protesters from travelling into the city on Saturday.

Trains, trams and buses will not run to the CBD from 8am until 2pm, with thousands of police preparing to stop people from gathering. Checkpoints have also been set up to restrict movement by car.

Two new tier-1 venues were added on Friday night to the health department’s swelling list of exposure sites in Daylesford, in central Victoria, and Kilsyth, in Melbourne’s east.

Anyone who visited the Lakehouse Hotel in Daylesford from 1.15pm on September 11 until 1.45am on September 12 is being asked to get tested and isolate for 14 days.

The same applies for anyone who was at the Gladesville Primary School in Kilsyth from 7am to 9.30am on September 7 and 2.30pm to 6.30pm on September 10.

Crowds could also return to Melbourne sporting events by November, with the government intending to implement a “no jab, no entry” policy for people going to major events, restaurants or pubs as part of the state’s road map to reopening.

Victorian government officials have told industry stakeholders of the government’s intention to force visitors and staff at hospitality venues and major events to be fully vaccinated, according to two sources not authorised to speak publicly about the briefings.

The government has said that it will release its road map for easing restrictions based on vaccination targets on Sunday.

18/09/2021 World News Comments Off on Victoria records one death, 535 new COVID cases as picnics and protests return to Melbourne
Lifestyle