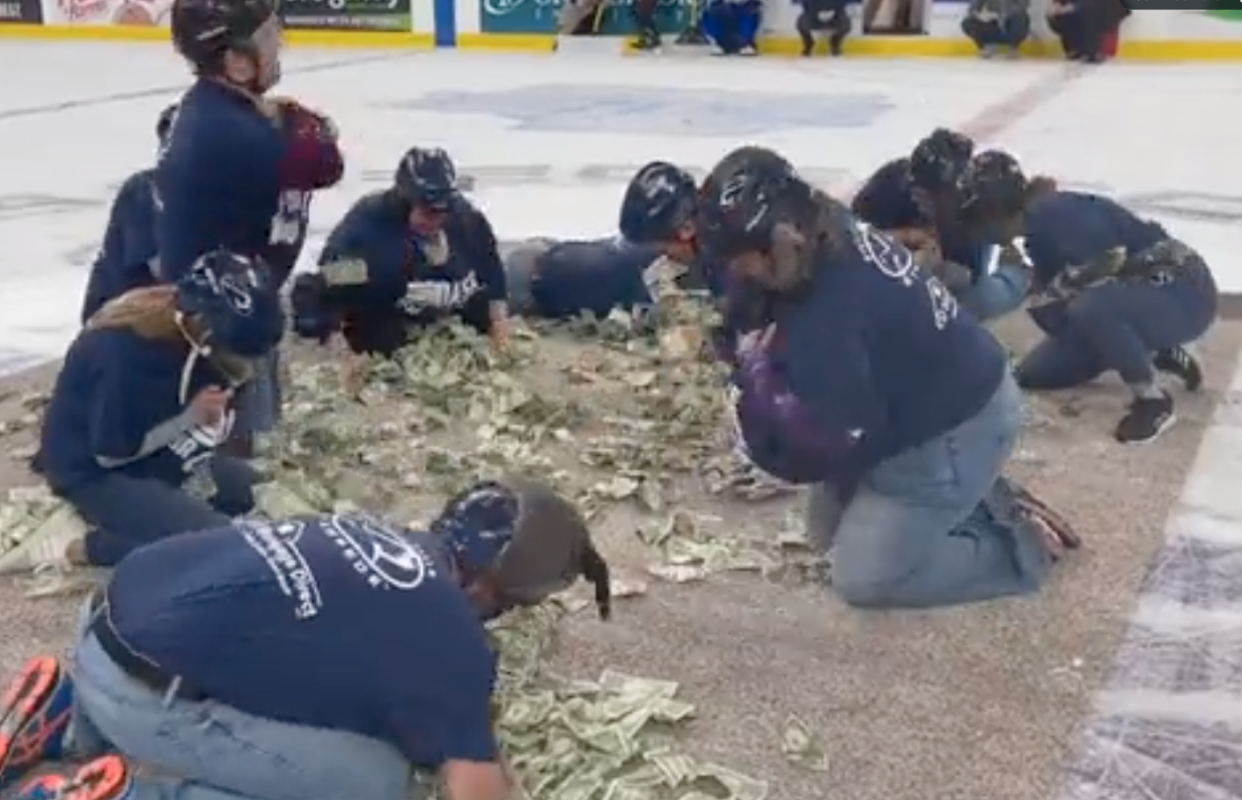 A video of teachers scooping dollar bills into their shirts on the ice at a hockey rink during a Saturday event has gone viral, with critics on social media calling the contest cruel and dystopian.

The event, dubbed Dash for Cash, involved 10 teachers in the Sioux Falls, South Dakota, area scrambling to collect single dollar bills from a pile of $5,000. The money, which was donated by South Dakota business CU Mortgage Direct, was meant to go toward the teachers’ classrooms or schools, the Sioux Falls Argus Leader, part of the USA TODAY Network, reported.

The contest took place during a Sioux Falls Stampede hockey game on Saturday. Each of the teachers got hundreds of dollars, ranging between $378 and $616.

Ryan Knudson, director of business development and marketing for CU Mortgage Direct, told the Argus Leader, "With everything that has gone on for the last couple of years with teachers and everything, we thought it was an awesome group thing to do for the teachers.

"The teachers in this area, and any teacher, they deserve whatever the heck they get,” he added.

Alexandria Kuyper, a fifth-grade teacher who participated in the event, told the outlet, "I think it's really cool when the community offers an opportunity like this for things that [educators] a lot of times pay out of pocket for."

Video of the event went viral on social media. One clip shared by Annie Todd, a reporter at the Sioux Falls Argus Leader, has racked up nearly 15 million views as of Monday afternoon.

But many social media users called the clip grim and reflective of funding for schools across the country.

Pitting teachers against each other to scramble on the floor for cash to use on making basic classroom improvements. Seems cool and normal. https://t.co/bSLNRymaGi

The Sioux Falls Stampede offered teachers a chance to "Dash for Cash" for their classrooms… when they could have… I don't know… just written them a check. https://t.co/xWELOqTFvJ

Others compared the clip to the television show “Squid Game,” which aired on Netflix earlier this year. The show is about contestants playing deadly versions of children’s games to win money.

America, 2021: Teachers on their hands and knees grubbing for $1 bills to buy classroom supplies for the amusement of a crowd @sfstampede in the middle of a pandemic. This is like something out of #SquidGames, except it's real, and it's here now. https://t.co/I6NulzuVmN

To entertain hockey fans in Sioux Falls, they have teachers run across ice in a desperate scramble for $ to equip their classrooms.

Following the contest, Sioux Falls Education Association president Tim Eckart said, "While this event was a well-intentioned gesture from our community, it really highlights the meager funding structure our teachers must work through to provide a high-quality education to our students," the Argus Leader reported.

"No educator should have to crawl on their hands and knees to supply proper educational tools for our students,” he added.

The average teacher salary in South Dakota in 2020 put the state in 50th place in rankings of teacher pay across the country, according to the National Education Association. The state was only ahead of Mississippi.