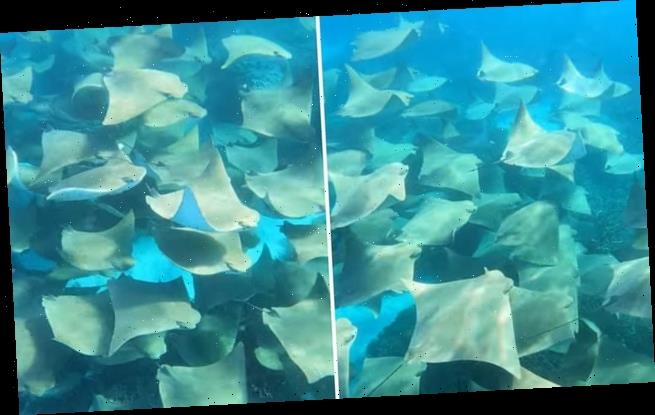 A breathtaking video of 100 cownose rays travelling through the Great Barrier Reef has left hundreds of viewers mesmerised.

Marine biologist Jessica Shackleton captured the video during a routine snorkel just off Lady Elliot Island, located on the southern tip of the World Heritage site.

Despite having conducted research on the reef for three years, Ms Shackleton said it was the first time she had seen a cownose ray.

Sightings of the species is rare in the Coral Sea, just off the coast of Queensland, as the cownose ray is native to the western Atlantic ocean. 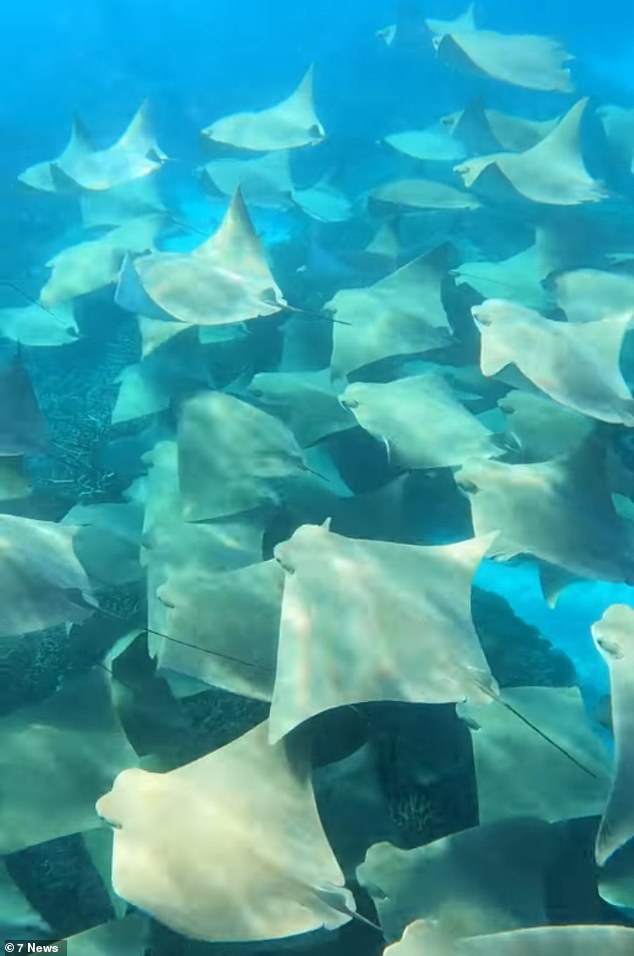 Ms Shackleton posted the stunning video of the rays to her Instagram page.

‘Yesterday afternoon I had one of the most spectacular encounters of my life as I turned and saw this huge fever of cownose rays approaching me,’ she wrote.

‘This is my first ever sighting of a cownose ray during my time on the Southern Great Barrier Reef and I was absolutely blown away.’

The marine biologist told Nine News it was one of her ‘magic moments’ on the reef where she was completely absorbed in the moment.

‘It looked like they were dancing in sync across the reef,’ she said, judging there had been around 80 to 110 rays in the large school.

Many viewerd on Instagram thanked Ms Shackleton for sharing the stunning footage in the comments, with fellow diver’s congratulating the biologist on her find.

‘Actually can’t believe it! So amazing! So stoked for you’, one wrote.

Another commented that capturing the moment would have been ‘amazing’. 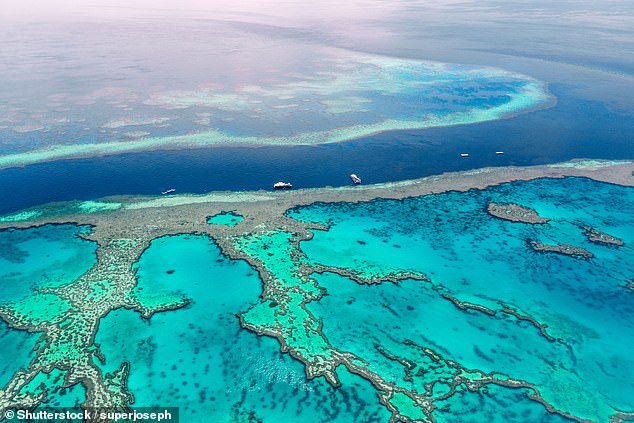 Cownose rays are rarely sighted in the Great Barrier Reef (pictured), but are known to travel long distances from the Atlantic ocean

‘I didn’t even know where to look or what to do’, Ms Shackleton replied to the user.

Many viewers shared they felt mesmerised by the graceful movements of the rays.

‘Watching this on repeat, so soothing,’ another commented.

The stingray is named for the unique shape of its head, which when viewed from above looks like a cows head.

Their migration patterns and reasons for travelling such long distances to Australia are not completely understood.

Marine researchers hope to learn more about the cownose ray through their guest appearances in Australian waters.

FACTS ABOUT THE COWNOSE RAY

They are active swimmers, rarely found lying motionless on the seafloor

They are foraging predators, feasting on claims, snails, oysters and crabs

Adult rays can grow to three feet wide, and have few natural predators

They have poisonous stingers, but are shy and rarely swim at the surface