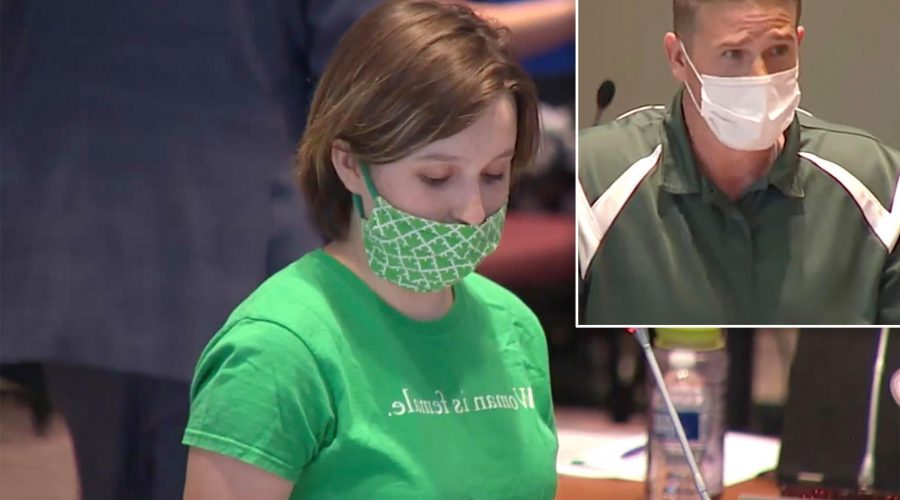 A 14-year-old Virginia girl has lashed out at her school district — claiming that its policy to allow transgender children to use female locker rooms is “dangerous” and “rooted in sexism.”

“Two years ago, I was told policy 1040 was just an umbrella philosophy and you weren’t going to allow boys into the girls’ locker rooms. But here you are doing just that,” eighth-grader Jolene Grover told the school district at a board meeting Tuesday, Fox News reported.

Jolene was referring to the Loudoun County Public Schools’ recent 8350 policy, which states in a draft that “students should be allowed to use the facility that corresponds to their gender identity,” according to the news outlet.

The teen, who was wearing a shirt that read “Woman is female,” defiantly told the board members: “Everyone knows what a boy is — even you.”

“Your proposed policies are dangerous and rooted in sexism,” she added.

The middle schooler then argued that “modern identities” are only “superficial.”

“When woke kids ask me if I was a lesbian or a trans boy because I cut my hair short, it should tell you these modern identities are superficial,” she charged.

Jolene, who is now homeschooled after her mother pulled her out of her school, said she worried that the new policy would lead girls to be harassed and assaulted.

“Now, boys are reading erotica in the classroom next to girls and you want to give them access to girls’ locker rooms and you want to force girls to call those boys ‘she,’” Jolene told the board.

“You do this in the name of inclusivity while ignoring the girls who will pay the price. Your policies choose boys’ wants over girls’ needs,” she said.

The district declined to comment to Fox News about Jolene’s comments.

The teen’s remarks have come amid an ongoing controversy involving gym teacher Byron “Tanner” Cross, who refused to use transgender students’ preferred pronouns.

He was suspended and then reinstated after he said during a Loudoun school board meeting that he wouldn’t recognize that “a biological boy can be a girl and vice versa” because of his Christian faith.

“I am speaking out of love for those who are suffering from gender dysphoria,” the Leesburg Elementary teacher last month told the school board, which has already bitterly divided parents and educators by pushing critical race theory.

The theory dictates that race is an underlying dynamic of all human interaction and views the human experience as a constant power struggle between the races, often with a focus on “white privilege.”