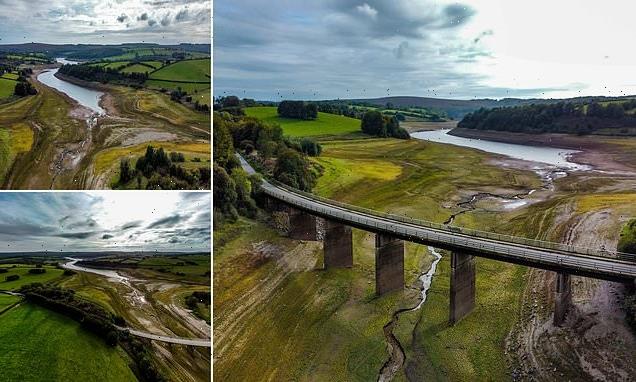 Shocking drone images show water levels at one of the UK’s largest reservoirs have dropped to just 20 per cent, sparking fears of shortages this winter.

Wimbleball Lake, on Exmoor in Somerset, is currently measuring less than a quarter of its capacity, with footage of the reservoir and the barren-looking countryside landscape highlighting the effect of this summer’s droughts on the UK water supply.

The Environment Agency officially declared drought status for the area in August after the driest conditions for 90 years.

This time last year, Wimbleball was more than 70 per cent full, but the average reserves are now below what they were in the exceptionally dry year of 1995 – when the reservoir’s capacity hit its previous record low of 26.4 per cent.

Water sports have also been cancelled on the lake until further notice ‘due to the unprecedented and prolonged period of hot and dry weather’ this summer. 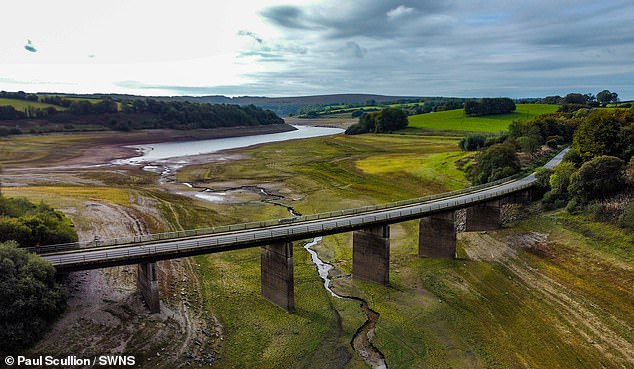 Footage of Wimbleball Lake, on Exmoor in Somerset, highlights the effect of this summer’s droughts on the UK water supply 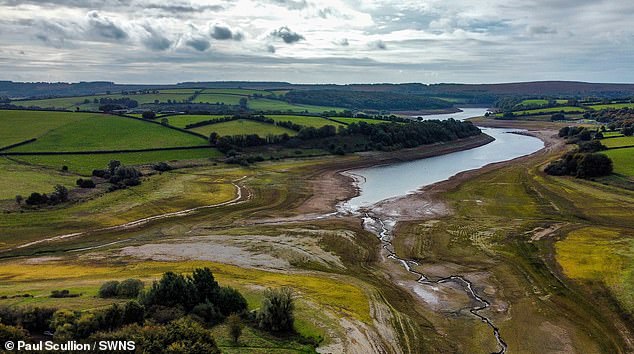 Water reserves at the reservoir have dropped to just 20 per cent, sparking fears of shortages this winter

The dramatic images were captured this week by Paul Scullion, 41, a freelance photographer and factory worker from Taunton, Somerset.

He said: ‘I’d heard the water levels were low there and I wanted to check it out myself – but what I saw was pretty shocking.

‘A couple of years ago the Wimbleball water levels were right up underneath the bridge. It’s unbelievable how low the water levels are now.

‘I’ve driven over near the reservoir before and seen children playing in the water and jumping off the bridge into the water.

‘This was only a few years back but they certainly can’t do that right now.’

Wimbleball is one of the South West’s largest reservoirs and has capacity to store 21,000 megalitres of water over an area of 374 acres.

South West Water reported the reservoir’s water storage level had dropped to just over 20 per cent on October 9.  Together SWW’s five largest reservoirs held just 30.2 per cent of their combined capacity.

SWW said the area experienced its fourth driest period since records began over 130 years ago this summer, which was why in August it introduced a hosepipe ban for the first time in 26 years in Cornwall and parts of Devon. 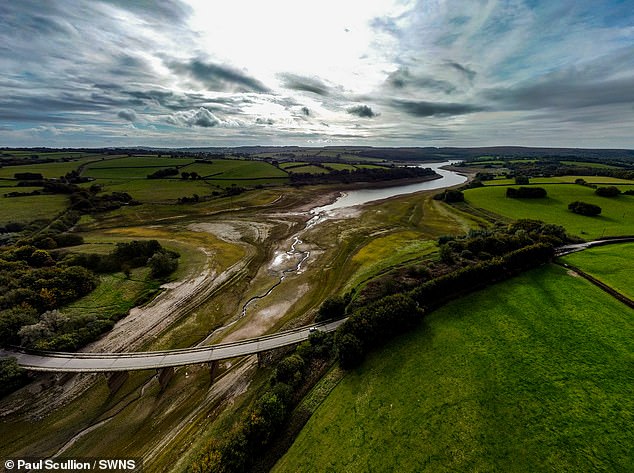 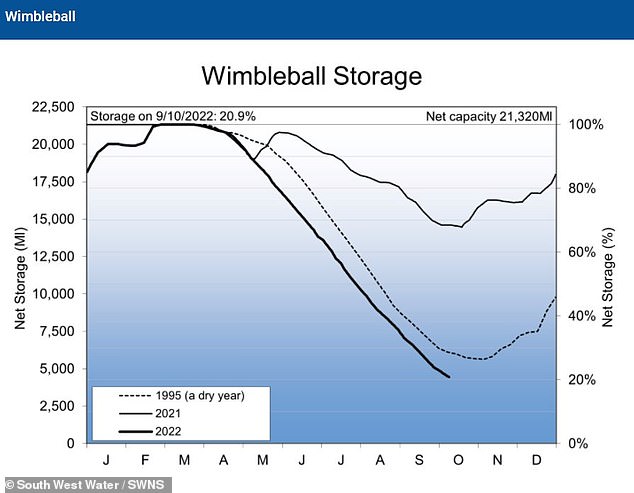 The company warned they were expecting ‘continued and serious pressure on reservoir levels’ into the winter months.

Jo Ecroyd, drought director at South West Water, said: ‘Reservoir levels across Cornwall and parts of Devon remain exceptionally low and continue to drop, and will remain so for the foreseeable future without sustained rainfall following a prolonged period of drought.

‘We are asking customers to redouble their efforts and do more to save water to avoid further restrictions and protect the region’s precious water resources.

‘It is essential that people living in, or visiting the South West do all they can now to reduce the amount of water they use.

‘The South West has experienced it’s fourth driest period since records began over 130 years ago alongside the hottest temperatures ever recorded in the region this summer adding more pressure on water resources. 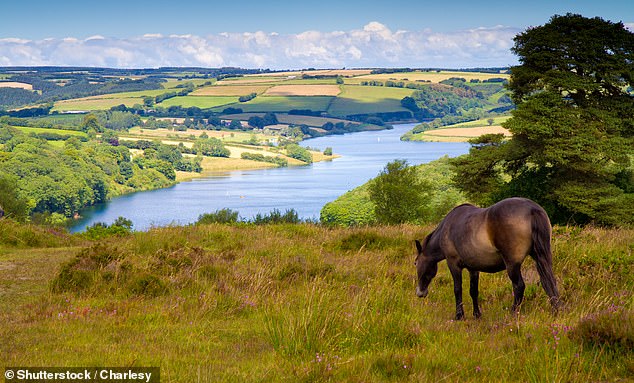 Wimbleball is one of the South West’s largest reservoirs and has capacity to store 21,000 megalitres of water over an area of 374 acres

‘We know our customers have worked hard to reduce their usage already, but we are asking everyone to continue to work together to protect the water in the South West.

‘We are continuing to work around the clock to fix more leaks across our network than ever before and provide customers with the necessary advice and tools to cut their usage.

‘The Met Office isn’t currently forecasting significant and sustained rain into the autumn months, so we are expecting continued and serious pressure on reservoir levels this winter.’

Hosepipe bans are still in place across the country after an exceptionally dry summer.

Thames Water, which provides water to 15 million people across Greater London, Oxfordshire and parts of Surrey said its reservoirs are at their lowest level since 2003.

In an update on their website last week the company said that rainfall this year has been 38% below average, adding: ‘We’ve seen below average rainfall for 10 of the last 12 months, including all of the last six.’