Victoria’s emergency chief told a private briefing of MPs he was reluctant to accept Defence Force help for the state’s storm clean-up partly because the military did not have their own chainsaws, just two days before bringing in 120 troops for tasks such as clearing trees.

Emergency Management Commissioner Andrew Crisp resisted pressure from the opposition and residents for almost 10 days, insisting troops would not have plugged the gaps required in the early days of the emergency, despite locals complaining of a lack of people power. 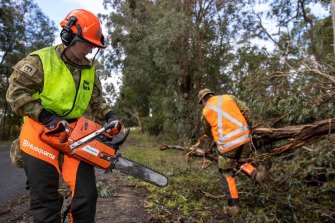 Mr Crisp’s comments came to light as a fire brigade captain in the Dandenong Ranges hit out at the government’s immediate response to the storms and a former Labor emergency services minister called for consideration of a new specialist agency to deal with the fallout of one-off events that crippled essential services.

The storm, which began on the evening of June 9, devastated much of the Dandenongs and parts of Gippsland, with new figures showing the cost has now reached $160 million and is likely to rise even further. Winds toppled trees, causing extensive damage to houses and downing electricity poles and wires.

More than 1800 Victorian households and businesses, mostly in the Dandenongs, remain without power.

The Age has confirmed that Commonwealth emergency bodies offered Victoria Australian Defence Force assistance within three days of the storms hitting and reminded the state government of a standing offer of ADF help for civil emergencies. 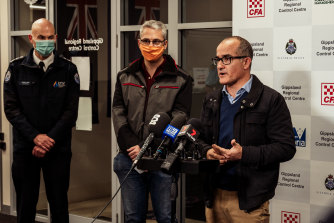 Mr Crisp is responsible for taking up the standing offer.

Two days before he asked for extra help, Mr Crisp told a private briefing of opposition MPs that defence personnel were not required on the ground because “they didn’t have many people who are trained … and they didn’t have arborists [tree specialists].”

“We actually [have] to buy them chainsaws,” he said, in comments verified by The Age. “At this stage, we don’t see a need.”

An Emergency Management Victoria spokeswoman said all ADF assistance requests required an impact assessment to determine how many troops were required and what their role could be. “This work was completed once the scale and complexity of the storm damage was assessed – as is standard process for any ADF request,” she said.

Opposition emergency services spokesman Tim Smith said the government either disregarded the potential role of the ADF or did not understand its ability to complete tasks such as clearing trees.

“It has been abundantly clear to everyone that more boots on the ground were required for everything from clearing trees, untangling power lines,” he said.

Mr Smith said the government’s reluctance to deploy the ADF during last year’s hotel quarantine program and the delay in accepting military assistance after the recent storm demonstrated a potential ideological aversion to using troops for a civil emergency.

The use of defence personnel was a major flashpoint last year during the state’s deadly second wave of the coronavirus pandemic.

In late June 2020, Premier Daniel Andrews said the military would not be required to assist with the hotel quarantine program. The following day, the government said up to 1000 military personnel would be called in to assist, but by that evening the state changed its position again, and downsized its request for assistance.

Bill Robinson, captain of the Kalorama Country Fire Authority brigade, said authorities’ management of the storms in the first two days was too centralised and did not use local knowledge.

“They were telling us what they were going to do and when we questioned them, they didn’t respond. It should be working the other way around,” he said. “It was only because of us getting up and screaming that it got sorted out.” 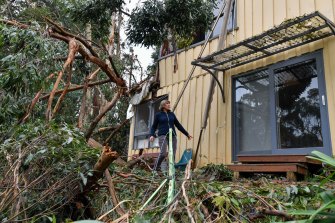 Lyn Osborne at her home in Kalorama after the storm.Credit:Joe Armao

Tarpaulins are now covering the part of the roof that was smashed in by a massive tree and the floor beneath the carpet appears to be dry.

Meanwhile, EnergyAustralia reported that works were continuing to seal cracks at the Yallourn coal mine after heavy rain did serious damage to its walls.

The company’s energy executive Liz Westcott said it was finalising a proposal with the state government to manage water flows and help relieve pressure around affected parts of the mine. 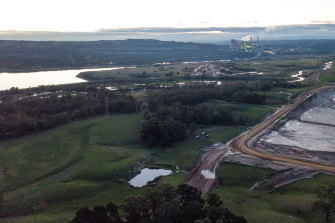 An emergency was declared for the Yallourn coal mine and power station last week.Credit:Jason South

She said the Yallourn power plant was still operating just one of its four units to meet the demands of the evening peak.

“So far we have been able to secure modest amounts of coal by selectively mining parts of our fields where it was safe to do so and within areas away from the area of concern,” she said.

Andre Haermeyer, emergency services minister in the Bracks government, said consideration should be given to a specialist agency that worked to counter the impact of natural disasters on essential services, including power, gas, telecommunications and water.

Mr Haermeyer, who was Victoria’s commissioner to Europe and based in Germany until 2012, said that country’s Technisches Hilfswerk agency – for technical relief – was an example of a highly skilled agency that mobilised swiftly to protect critical services.

The agency may have been able to assess the storm’s impact on power in a more timely manner, Mr Haermeyer said, and could be attached to the SES or fire brigade.

“It could have a high cost and it would be a question of whether the community is willing to pay. It may seem like an extravagance, but it’s not so when you have an event like this.”

23/06/2021 World News Comments Off on ‘We have to buy them chainsaws’: Crisp talked down ADF days before requesting 120 troops
Lifestyle