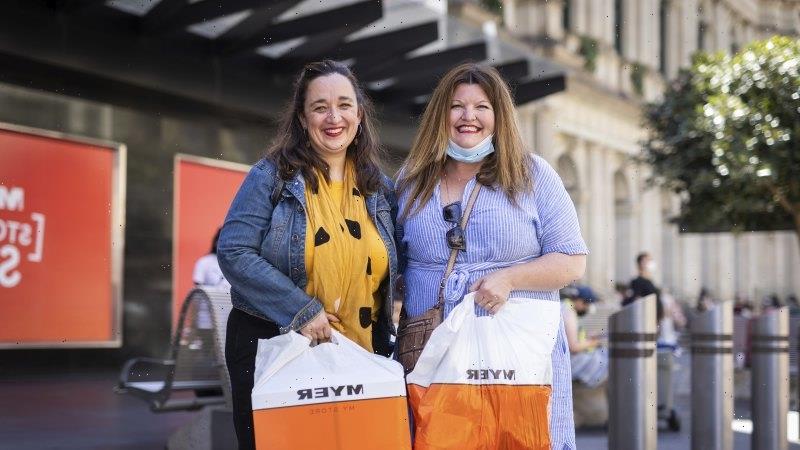 Camping gear, bikes and new post-pandemic wardrobes are among the standout popular purchases in this year’s Boxing Day and post-Christmas sales.

National Retail Association CEO Dominique Lamb said feedback from her organisation’s members this week found despite increasing COVID-19 cases and mask mandates in shops, Victorians had flocked to retailers to Hoover up items for a post-lockdown lifestyle.

“This year is probably one of the best in terms of sales, and what we’re seeing people purchase is for themselves as opposed for family members,” she said. 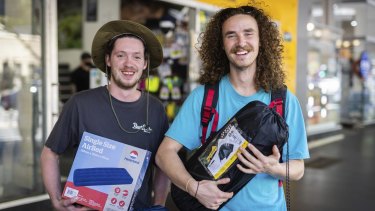 Friends James Bentley (left) and Andy Brown stocked up on camping gear at the post-Christmas sales before heading to a camping music festival over New Year’s Eve.Credit:Paul Jeffers

Ms Lamb said there were unusual runs on products such as bicycles, which have been in short supply, and portable espresso coffee makers that people can take camping.

“People are purchasing a lot of bikes; they’re getting back out there and moving around again,” she said.

“BCF are [also] obviously doing a great trade because of camping, because if you’re not confident about leaving the state then you need to go regional Victoria.

“Typically a lot of Australians would have left the country, off to places like Bali, and we’re not doing that now … there’s lots of those camping holidays going on in Victoria.”

Hospitality workers and friends Andy Brown and James Bentley, both 22, experienced the clamour for camping gear first-hand this week.

The pair hit the sales before a trip to the three-day Tabula Rasa music festival in Hamilton in the state’s south-west over New Year’s Eve – a reunion event for their friends who haven’t been to a festival in two years. 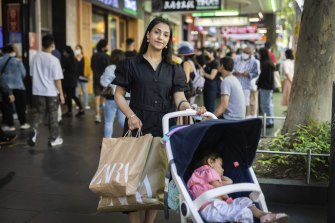 Zainab Ali, 29, bought new outfits for her entire family from Zara during the sales this week.Credit:Paul Jeffers

“We were going to go to get a $50 tent at Kmart or Big W, but they were completely sold out,” Mr Brown said.

The pair ended up buying a discounted tent, air mattress, a sleeping bag and a sunhat from Aussie Disposals.

“It was pretty good – I wasn’t looking forward to spending hundreds of dollars on a tent,” Mr Brown said. “I’ll probably have it for the rest of my life, too.”

Personal clothing will top the list of most popular items purchased by Australians in the sales, according to a survey conducted by the Commonwealth Bank, which showed 36 per cent of all planned purchases would be on wardrobe items.

Technology will come in second place, followed by electrical and white goods and home furnishings in third as shoppers expected to fork out an average of $557 each during the sales this week, up 14 per cent on what people say they spent a year ago, $487.

While the popular categories at the sales tended to stay the same year-to-year pre-pandemic, Ms Lamb said personal attire didn’t usually feature as high as it did this year.

Best friends Jen Osborne and Natalie Daniel, from Camberwell, were among those shopping for a new post-lockdown wardrobe at the sales this week.

“I got shoes for summer because last summer came and went and we were all nervous and didn’t do much,” said Ms Osborne, speaking to The Age in a bustling Bourke Street mall.

“Today I’ve bought sandals, earrings for going out, dresses for going out,” she laughed. “And red lipstick because every woman needs a signature lipstick.”

Ms Daniel, who like her best friend is a high-level executive in a corporate workplace, said she purchased a new wardrobe at the sales as her office’s dress code had shifted away from blazers and heels during the pandemic. 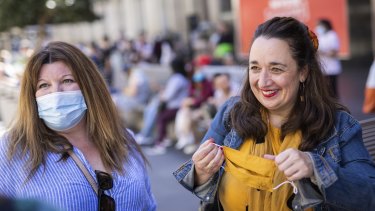 “It used to be very corporate and lots of heels. But what you can wear is different because it’s dropped down and you’re dressed for your day a lot more,” she said.

“So I bought some dressy runners that you can wear with a nice dress and denim jacket and wear it to the workplace – where you never would have been able to in the past.”

According to the Commonwealth Bank survey data, men were looking to spend more on average than women ($646 v $459), and parents with one or two children were expected to spend $731 on average.

There are other differences in the sales this year – there’s been a 25 per cent increase in online sales this year compared to last, and people tend to get in and out of stores quicker with mask mandates in place, according to the retailers’ association.

A spokeswoman for David Jones said party dresses in bright colours, jewellery and party shoes were among their bestsellers this week, as well as brightly coloured homewares, luggage and swimwear.