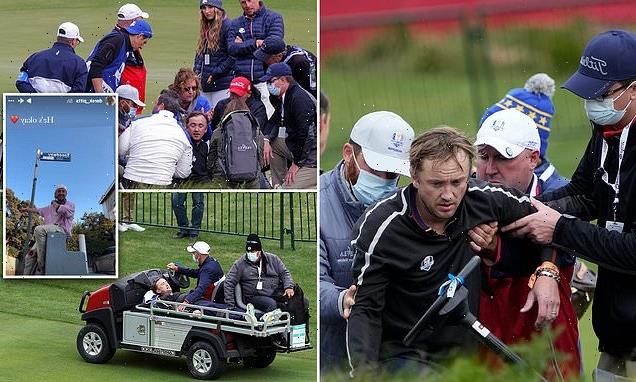 Tom Felton made £30m playing the evil boy wizard in Harry Potter – but as he collapses at a celeb golf tournament… what’s left Draco Malfoy in the rough, asks ALISON BOSHOFF

The actor from Surrey, who came to fame appearing as bad boy Draco Malfoy in the Harry Potter films, played up to the appreciative crowd by pretending to ride his club like a broomstick – and raised a laugh by performing a comedy trip-up.

Now 34, Felton is well used to the applause, and could hardly have looked more relaxed at the event.

After all, as well as being a natural entertainer Felton is a keen golfer and just three weeks beforehand had taken part in another pro-am event at the BMW PGA Championship in Virginia Water, Surrey.

This sort of thing is, for him, quite literally par for the course. 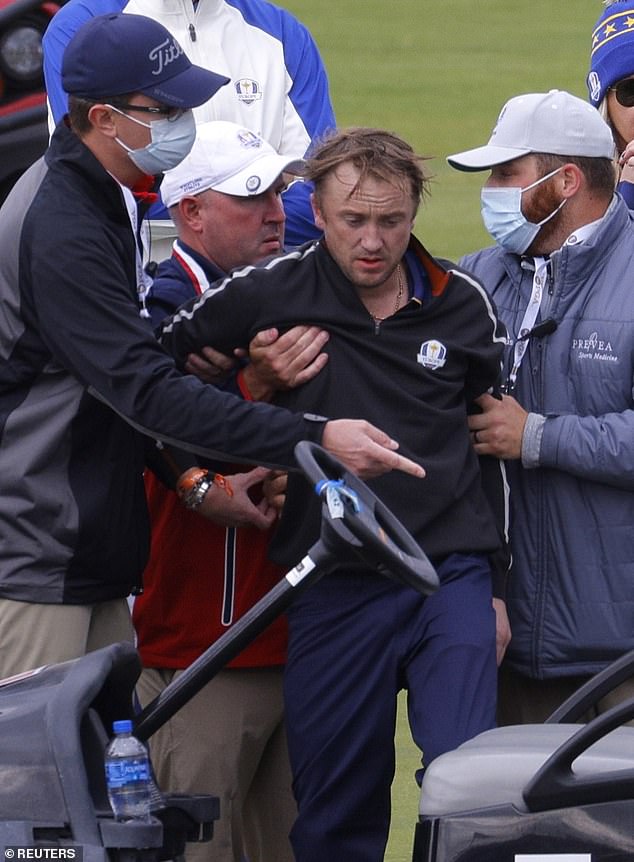 However, not long after larking about and teeing off on that chilly morning two days ago in Wisconsin he collapsed on the green, suffering an as-yet-undisclosed medical emergency 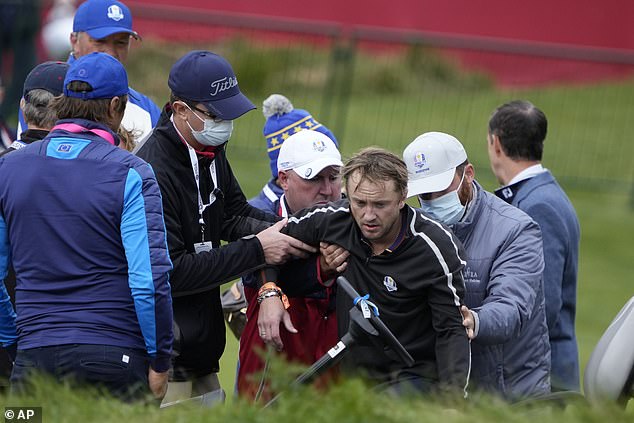 Felton was lifted on to a stretcher, put on a golf buggy and taken off the course in Whistling Straits, Sheboygan. The contrast with his arrival could not have been more marked

However, not long after larking about and teeing off on that chilly morning two days ago in Wisconsin he collapsed on the green, suffering an as-yet-undisclosed medical emergency.

Felton was lifted on to a stretcher, put on a golf buggy and taken off the course in Whistling Straits, Sheboygan. The contrast with his arrival could not have been more marked.

So what had reduced this buoyant young star to a pitiful version of his earlier self – just a day after he celebrated his 34th birthday?

The Professional Golfers’ Association of America said afterwards: ‘In today’s Ryder Cup Celebrity Match, actor and musician Tom Felton experienced a medical incident on the course while participating for Europe.

‘He was transported to a local hospital for treatment. No further details are available.’

His mother Sharon was not at work at the domestic appliance shop she runs in Dorking yesterday afternoon, and his publicists in Los Angeles did not return requests for comment.

The post will have done little to appease the millions of ardent Potter fans across the globe.

Some must be fearful he is following in the footsteps of co-star Daniel Radcliffe, who admitted to hating being ‘watched’ and turned to alcohol to offset the pressures of global fame. 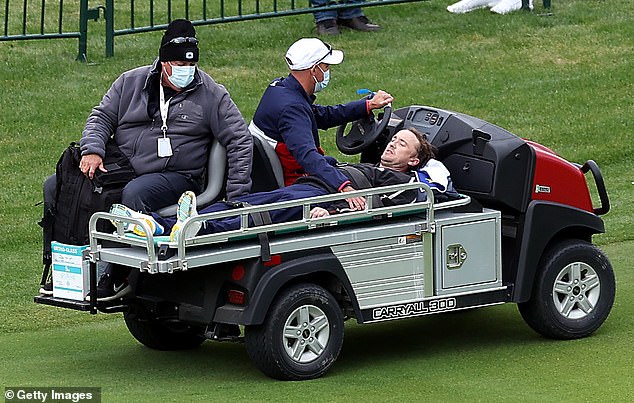 The Professional Golfers’ Association of America said afterwards: ‘In today’s Ryder Cup Celebrity Match, actor and musician Tom Felton experienced a medical incident on the course while participating for Europe’

After all, when you are a household name at age 14 and are worth a cool £30million by the time you hit 30, where is there to go in life but down?

It was 1999 when 12-year-old Felton was cast in the role that would change his life – although he hadn’t read the books.

He tried out for the role of both Harry and Ron Weasley before being cast as villainous Draco Malfoy. The first film came out in 2001, and the last in 2011.

But coping with becoming a worldwide phenomenon while still a teenager was far from easy.

Felton told one interviewer: ‘One thing that people keep on saying to me is that the wealth and the fame must have made up for missing out on my childhood. But the idea of money – putting a price on your childhood – is ridiculous.

‘To me, fame is not a positive thing. The idea of being famous is a lot better than the reality. It’s fantastic when you go to premieres and people cheer you, but it’s not real.’

It also wasn’t easy playing the bad guy. ‘I’m stunned when people ask if I’m like Draco,’ he said. ‘Jo [Rowling] wrote Draco as a one-dimensional bully, a slimy individual, to get the audience hating him.’

He tried once to explain the peculiar nature of his notoriety and what it’s like to appear at a Harry Potter convention in a documentary about ‘superfans’, describing it as a double-edged sword.

‘I’m not a very good ‘famous person’,’ he said. ‘If someone starts taking a sly picture I become very awkward – not because I am rude but because I’m not sure I know what I should be doing. It was hard to know what to make of people who were so passionate about it.’

Of course there were enormous benefits that came with fame and fortune and like any young man, Felton embraced them.

He spent his 21st and 22nd birthdays at nightclubs in Las Vegas, and still socialises with his co-stars including Emma Watson, who famously had a crush on him as a teenager.

The pair went on holiday together in 2019, sparking rumours of a romance, since denied. In 2016 he attended the Coachella music festival in California alongside a gaggle of friends.

Stripped to the waist, he smoked a roll-up cigarette which saw him dubbed ‘Hufflepuff’ in a headline, in a jocular reference to one of the Hogwarts’ houses in Harry Potter.

Later that same year he was pictured playing golf on a holiday in Hawaii. Barefoot, he drew on a bottle of beer while in the golf cart and again was smoking a roll-up ciggie – and looking like he was having more than a little fun.

Not one to take himself too seriously, he once joked: ‘Never name drop. It’s uncouth and not classy. Paul McCartney taught me that. Kanye agreed.’

But behind the avuncular exterior, it’s hard not to imagine the talented young actor must be looking for something more.

His education was truncated by the Potter films, and although Harry Potter and the Philosopher’s Stone wasn’t his first film role – he had been in The Borrowers in 1997 and also Anna and the King, the remake of the King and I starring Jodie Foster, in 1999 – his film career since has not quite continued on that Potter-esque trajectory of success. Such a roll of blockbusters has proved impossible to repeat.

As early as 2007 he was saying that he wanted to move on from Malfoy. ‘I look forward to playing a good guy, or someone different anyway; someone not so spiteful.’

Moving on wasn’t easy, though. He landed some small roles towards the end of the Potter era – in 2010’s comedy Get Him To The Greek and in Rise of the Planet of the Apes in 2011.

But with age came self-awareness, and self-doubt. ‘I’m much more nervous in auditions now than I was at 11,’ he told the Mail. ‘You take a lot of hits before you get something good.

‘The first few were heartbreaking. I thought, ‘I can’t do this.’ They are cut-throat in America. Before you’ve even started, someone’s playing on the BlackBerry… I did 19 auditions and got the 20th, for the film The Apparition.’ Sadly, it wasn’t a success. 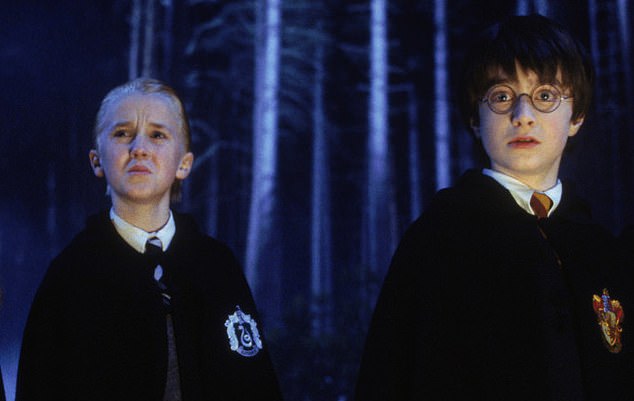 After all, when you are a household name at age 14 and are worth a cool £30million by the time you hit 30, where is there to go in life but down?

There have been TV roles, but with some understatement he recently said: ‘I haven’t landed James Bond yet.

‘Playing Bond or a Bond villain was why I wanted to do movies in the first place.’ Away from the screen, lasting love seems also to have eluded him.

A long romance with the actress who played his wife in the final Potter film, Jade Gordon, ended in 2016.

It was reported in 2018 that he had joined celebrity dating app Raya, but only one female is known to play a prominent role in his life – his black labrador Willow, who accompanies him as he shuttles between a mews house in London and a beach house in Venice, Los Angeles.

His hairline may be receding, and those famously ice-blue eyes are now ringed with wrinkles, but Felton’s lasting popularity among Potter fans has allowed him to explore some new avenues of business.

He has just launched a range of clothing, much of which bears his likeness in cartoon form, and is exploring a parallel career in music, releasing nine songs and becoming active on TikTok.

He frequently posts footage there and on Instagram of himself singing and writing songs on the hoof – all lapped up by his nearly 11million followers.

Whether they will be quite as delighted by the photos that emerged of him on the golf course this week, remains to be seen. Perhaps, as he posted online on Wednesday: ‘I still feel the best is yet to come.’