Washington: The whistleblower's identity remains obscured, the details of his work for the CIA cloaked in secrecy. But the document he delivered reveals almost as much about the investigative mission he carried out in stealth as it does about the alleged abuses of power by the President.

From the moment he learned about President Donald Trump's attempts to extract political dirt on former vice president Joe Biden from the newly elected leader of Ukraine on July 25, the CIA officer behind the whistleblower report moved swiftly behind the scenes to assemble material from at least half a dozen highly placed – and equally dismayed – US officials. 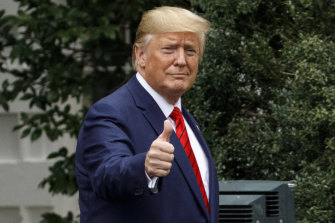 Trump gives the thumbs-up as he arrives for a ceremony on the South Lawn of the White House on Thursday.Credit:AP

Trump has all but called for the whistleblower and those who assisted him to be unmasked, despite federal laws designed to protect identities and prevent reprisals in such cases.

"I want to know who's the person who gave the whistleblower … the information," the President said on Thursday.

Other officials have said they are intentionally not seeking information about his identity. Joseph Maguire, the acting director of national intelligence, testified on Thursday that he does not know who wrote the document. A Justice Department file related to the case noted that the inspector general found "some indicia of an arguable political bias on the part of the complainant," but Maguire said he did not question the whistleblower's motivations.

"I think the whistleblower did the right thing," he said. "I think he followed the law every step of the way."

Although his name has not been disclosed, aspects of his background have emerged. He works for the CIA, an affiliation first reported by The New York Times on Thursday, according to current and former officials familiar with his identity and position in the intelligence community.

US officials and an attorney for the whistleblower have asked news organisations to refrain from releasing details about him, citing concerns for his privacy and safety.

In the complaint, the whistleblower describes receiving troubling reports about the Trump administration's approach with Ukraine from "more than half a dozen US officials" over four months.

But the document suggests that it was only after learning about the nature of Trump's call on July 25 with Zelensky that the whistleblower went from sharing colleagues' concerns to being convinced that he needed to document and report them.

An approximate transcript released by the White House shows Trump prodding Zelensky to direct his government's investigative bodies to turn their attention to alleged corruption by an energy company for which Hunter Biden, the former vice president's son, had served as a board member. 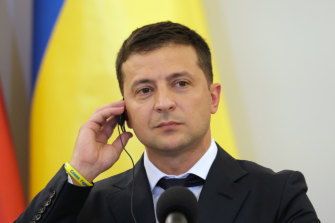 Trump has alleged that the elder Biden used his influence to shut down a corruption investigation targeting the company. The claim has been repeatedly discredited, and there is no credible public allegation that Hunter Biden was guilty of wrongdoing.

Trump also urged Zelensky to "meet or speak with" Giuliani and US Attorney-General William Barr to redouble Ukraine's efforts to seek damaging material tied to Biden.

"Multiple White House officials with direct knowledge of the call informed me that, after an initial exchange of pleasantries, the President used the remainder of the call to advance his personal interests," the whistleblower report says.

The document also cites other developments that allegedly troubled White House officials, including the abrupt removal of the US ambassador to Ukraine in May after a campaign by right-wing media entities to discredit her.

Although the report does not describe explicit coordination between the whistleblower and White House officials, it depicts an arrangement in which he came to serve as their conduit. It is not clear whether they knew of his intention to incorporate their information into a report he was drafting for the inspector general.

The report refers to a "discussion ongoing" between those troubled by the call and White House lawyers, indicating administration attorneys were aware of internal concerns about Trump's conduct before the whistleblower complaint surfaced.

The report lays out investigative leads for Congress or other authorities. It notes that there were "approximately a dozen White House officials who listened to the call" and identifies a State Department official – referred to with conspicuous formality as "Mr. T. Ulrich Brechbuhl" – as another participant.

Brechbuhl had only joined the State Department in May as an adviser to Secretary of State Mike Pompeo.

Beyond his sourcing at the White House, the whistleblower has remarkable insight into the activities of US diplomats and Ukrainian officials. The report notes that Kurt Volker, the US special representative for Ukraine, and Gordon Sondland, the US ambassador to the European Union, arrived in Kiev the day after Trump's call and proceeded to advise officials there on how to "navigate" the demands of the American President.

The document also traces Giuliani's extensive intervention in US-Ukraine affairs, including a meeting in Madrid with one of Zelensky's senior advisers. The Madrid trip was described as a "direct follow-up" to the Trump-Zelensky call, for a more fulsome discussion of the "cases" mentioned in the two leaders' discussion.

At its core, the complaint makes the case that Trump was withholding items that Ukraine desperately wanted – including hundreds of millions of dollars in aid and an invitation to the White House – to use as leverage.

The Trump administration had been sending those signals since Zelensky's inauguration on May 20. American officials who travelled to Kiev to attend the ceremony "made clear" to the Ukrainians that Trump would not meet the new leader until he saw how Zelensky "chose to act," according to the document. Any meeting or phone call would hinge on the Ukrainian President's willingness to "play ball" with his American counterpart, the whistleblower wrote.